Brazil is facing its worst recession in history. The economy contracted 3.8 percent in 2015 and is expected to shrink just as much this year. Unemployment has reached 11 percent, with over 10 million people out of jobs. Fiscal revenues have significantly declined due to falling activity. Coupled with ever-rising expenditures, Brazil has registered large deficits since the end of 2015: The difference between revenues and expenditures, including interest payments on the debt, reached nearly 11 percent of gross domestic product (GDP) at the end of last year; in 2014, the deficit was over three times lower, at 3.5 percent of GDP, without adjusting for inflation. Between 2014 and 2015, the gross debt to GDP ratio rose from about 65 percent to just over 70 percent. By all accounts, Brazil’s debt is currently unsustainable.

Utter disarray in the Brazilian economy, underscored by collapsing activity and soaring unemployment, means a comprehensive list of challenges facing the country under its new interim leadership would probably require several pages. Tempting as it may be to spell out an exhaustive set of measures for restoring growth and reversing unemployment, it is probably more realistic to focus on Brazil’s five immediate challenges, many of which summarize the depth of the country’s problems. Without adequate recognition of these challenges, Brazil’s growth is likely to languish for years to come.

Put differently, addressing Brazil’s five immediate problems is a necessary but not a sufficient condition for restoring annual growth rates of 2 to 3 percent per year. To restore growth to such levels a more ambitious agenda that includes labor market reform, deep financial sector reform, tax reform, and other politically difficult measures would need to be undertaken. That task not only requires a longer time horizon than the interim government’s probable two-and-a-half years in office but also needs the general support of the Brazilian people. Such support would come only under new general elections, due to take place in 2018.It is widely recognized that Brazil’s most pressing problem is fiscal. It is not, however, simply a matter of finding the mix of policies to address growing deficits and an unsustainable debt path, but rather of addressing underlying structural problems that make budget execution and fiscal balancing a nearly impossible task in Brazil. This said, the first challenge is more mundane.

Brazil’s new finance minister, Henrique Meirelles, already conceded in a recent interview that this year’s primary deficit—revenues minus expenditures, excluding interest payments on the debt—is likely to exceed 2 percent of GDP, the as-yet-unapproved target that Dilma Rousseff was trying to pass through Brazil’s Congress. A number of implicit government guarantees that may soon become more explicit, making the deficit much larger in the short term, include potential cash injections into oil company Petrobras and the state-owned power company Eletrobras, as well as the recapitalization of Brazil’s public mortgage bank, Caixa Economica Federal. A quick calculation with many caveats—Caixa’s balance sheet is not publicly disclosed, and the full amount of distressed assets is not known—suggests the 2016 primary deficit could be as large as 3 percent of GDP, higher than last year’s 2 percent of GDP. Meirelles has said his team is currently working under the assumption that the deficit could be somewhat smaller than 3 percent, closer to 2.5 percent of GDP.

In view of the sizeable deficit, and the constraints to adopting a substantial short-term fiscal adjustment, restraining expenditure growth is of paramount importance. Interim president Michel Temer has wisely indicated that further tax hikes are not among the government’s immediate priorities in view of Brazil’s severe recession and the toll it has taken on households’ and firms’ balance sheets. Containing government spending, however, is urgent. As a result of constitutional obligations, earmarking and indexation mechanisms, public spending is not only unresponsive to the economic slump but also very difficult to reduce. As a significant share of spending is indexed to past inflation, the government’s obligations have continued to rise from 33 percent of GDP in 2014 to 36 percent in 2016. Put differently, although nominal GDP growth in 2015 was about 6 percent, expenditure growth amounted to a whopping 15 percent that year, mostly because of high inflation (11 percent) and some fiscal profligacy.

Meirelles has already proposed instituting clear breaks on nominal spending. These would likely limit expenditure growth to no more than non-inflation-adjusted GDP growth in any given year. While it is not yet clear whether the proposal would be stricter with respect to certain spending categories than others, thereby protecting key social programs, it would possibly involve constitutional amendments to be fully implemented. Amending the Constitution in Brazil, ominous as it may sound, is fairly common practice. The current government would need three-fifths of the vote in both houses to pass nominal limits on expenditures. Temer’s recent ministerial appointments suggest he may have as much as two-thirds the support of Brazil’s Congress.

As a result of Brazil’s deep recession, as well as a substantial weakening of the fiscal responsibility framework at the state level, subnational finances are in dire straits. Many states are not current on benefit and wage payments to public servants; some have even begun parceling these payments, motivating strikes by the police force and other crucial services. Recently, the Supreme Court ruled on a motion by the southern state of Santa Catarina that would effectively grant it full debt relief by the federal government. While other similar motions by state governors have followed suit, the Supreme Court has put off further rulings until the new government is able to open negotiations with a view to providing at least some debt relief to any state that needs it. It is unclear how much these efforts might cost the budget and add to the public debt burden. However, if debt renegotiations are successful they would not only provide the Temer government with much needed regional support but would also pave the way for tax harmonization among the states, an issue that the private sector has long defended. Currently, excess discretion regarding state-level taxes creates massive distortions that weigh on businesses, particularly the manufacturing sector. It is a common complaint that companies that have operations in one state but need to sell their products in other states end up paying the same taxes over and over again, at varying rates. Tax harmonization would improve Brazil’s business environment, helping to instill much needed confidence.

Public banks in Brazil currently account for 57 percent of the country’s total credit market. These operations are largely subsidized, implying that lending rates are unresponsive to monetary policy. Public banks have tended to drive up interest rates (both with and without inflation adjustments), increasing the cost of capital and adding to the government’s interest bill. Moreover, since some of these institutions have received vast financing from Brazil’s Treasury, as well as generous subsidies from the federal government, they have been a significant drain on the budget and have contributed to Brazil’s growing debt problems. Untangling the ties that bind public banks, fiscal policy, and monetary policy is fundamental to restoring macroeconomic stability and to removing distortions that make investment too costly and productivity too low.

Over the past two decades, Brazil has been increasingly isolated from the global economy. According to various measures of trade openness, it remains one of the most closed economies in the world. As figure 1 shows, Brazilian exports have remained mostly “made in Brazil,” while many emerging economies today boast an export base that is largely “made in the world.” Brazil’s first priority should be to remove local content requirements that keep foreign investment away and hurt local firms in the process. 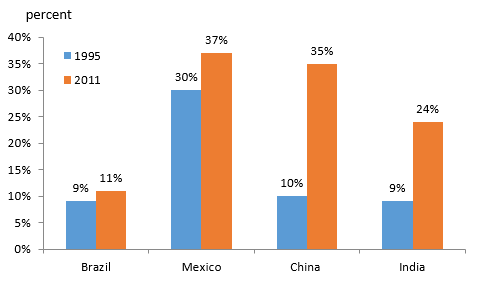 The new Brazilian government has put trade at the top of its agenda by placing Brazil’s export promotion agencies directly under the presidency and the Ministry for Foreign Affairs. While there is a lot to be done in designing a strategy for Brazil’s new relations with the dysfunctional Mercosur, the Pacific Alliance, the United States, and the European Union, laying the groundwork for trade facilitation agreements could help relieve some of the country’s economic strife, even if it is no silver bullet for restoring sustainable medium-term growth.

Governments take steps to save tourism from COVID-19