The ominous rise in debt-to-GDP ratios in Greece since 2010, and in the advanced economies after the global crisis of 2008–09, has rekindled interest in the historical experience of large samples of countries. Two important fiscal variables are interesting to consider in this regard: the primary fiscal surplus (i.e., the difference between fiscal revenues and non-interest expenditures) and the interest bill on the government debt, both expressed as a share of GDP.1 Both are key determinants of whether debt sustainability (a debt-to-GDP ratio that does not rise indefinitely) can be achieved.

This blog post provides simple historical statistics on these variables, which my coauthors and I collected and made available in full to the general public in January 2013. The statistics can inform readers' judgments on the feasibility of reaching certain levels of the fiscal primary surplus and servicing the interest bill.  A separate posting by William R. Cline reviews the preliminary debt sustainability analysis for Greece published by the International Monetary Fund on July 2, and analyzes how the assumptions embedded in the Fund's report fit in the context of these historical fiscal statistics.

The following table provides summary statistics for 1800−2011 for a sample of 55 countries, subject to data availability, for the major budgetary line items, including revenues, expenditures, government debt interest bill, overall fiscal balance, primary balance, and gross government debt, all as a share of GDP. The data comprise 5,500 observations each for revenue, expenditure, overall fiscal balance, and debt. Interest expenditure data are limited to 4,600 observations (and consequently primary expenditure and primary balance as well). Both debt and primary balance data are available for about 4,500 country-years. 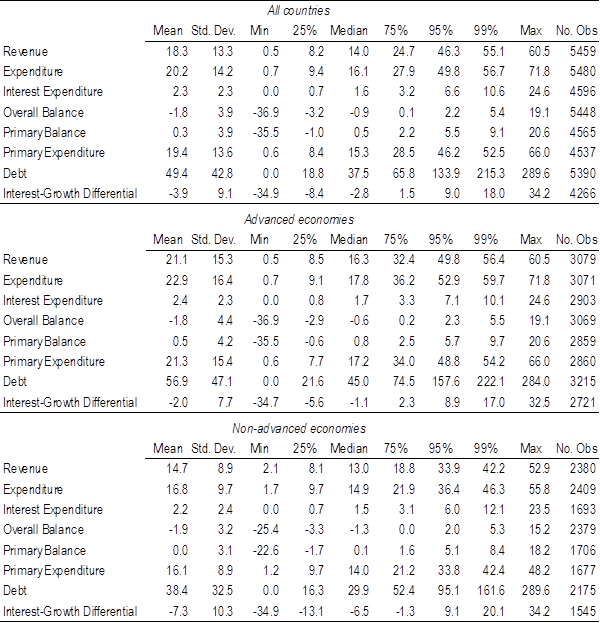 Notes: Fiscal variables as shares of GDP. Summary statistics are presented for the unbalanced sample for the countries and years with available data, from 1800 to 2011, for up to 55 countries. The interest-growth differential (in percentage points) is the difference between the implied nominal interest rate (this year's interest payments divided by the average of this year and last year's debt stock) and this year's nominal GDP growth rate. All primary concepts are net of government interest expenditure.

The following figures report the full distribution of the primary fiscal surplus and the interest bill, both as shares of GDP, for advanced economies, now focusing more specifically on the post-WWII period. 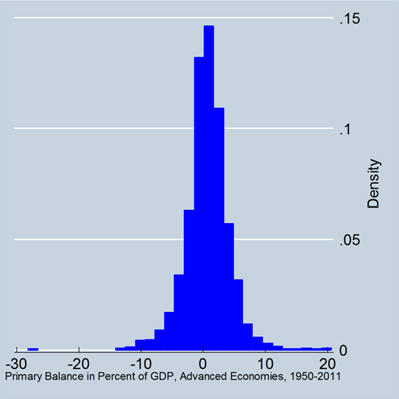 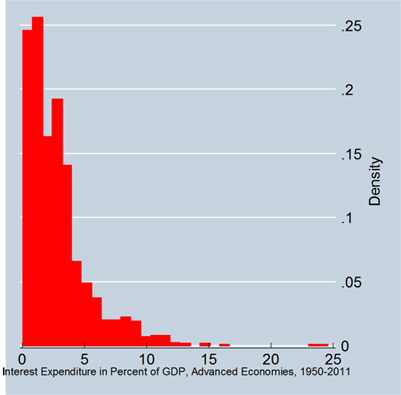 Using the dataset published in our original study, some authors, including Barry Eichengreen and Ugo Panizza, have argued that the historical experience suggests that primary surpluses in the order of 3 to 5 percent of GDP are unlikely to be sustained long enough for the debt to be stabilized. This is misguided. As the data show, surpluses of 3 percent have been achieved almost one quarter of the time, and surpluses of 5 percent have been achieved more than 5 percent of the time. They have been sustained by advanced economies with diversified production. But this is not just a question of some authors seeing the glass half full whereas others see it as half empty: The reason large, prolonged primary surpluses have been infrequent is that they are only required when debt ratios are high and the interest-growth differential is large.

Moreover, while statistics from the past are informative, they should be interpreted in light of the current situation. The global economic and financial crisis that began in 2008 has led to the largest increase since World War II in gross general government debt-to-GDP ratios for advanced economies. The average went from 72 percent at end-2007 to 105 percent at end-2014. Other things being equal, higher debt ratios require higher primary surpluses to keep the ratio stable. As debt ratios in decades past were lower than today, it may be reasonable to conclude that primary surpluses in the past did not need to be as high and maintained for as long as would be the case today or in the years ahead. When a primary surplus has been sufficient to contain or reduce the debt-to-GDP ratio, few governments would run that ratio into the ground (with the exception of commodity-producing countries building large asset stocks). Thus, with larger debt stocks than in the past, primary surpluses in the advanced economies would be expected to be larger in the future than in the past, requiring commensurate policy effort.

1. The emphasis on the primary fiscal surplus stems from the fact that it needs to be at least equal to (r-g)*(D/Y) for the debt-to-GDP ratio to be stable or to decline, where r is the interest rate and g the GDP growth rate.

Greece: Better Than Expected, But Still Not Good News