The global economic and health crisis is causing consumer demand to fall and oil prices to decline, which is what one would expect. But this collapse is also taking place against the backdrop of an all-out price war between Russia and Saudi Arabia, leading to the lowest fossil fuel prices in nearly a generation. Governments should seize on this trend as a windfall. They should tax the oil price decline away and use the revenue to fund emergency measures fighting the COVID-19 pandemic.

In typical recessions, governments in oil-consuming emerging and advanced economies hardly mind that the price of oil imports goes down. Such declines restore consumer purchasing power, acting as a de facto OPEC-financed fiscal stimulus that puts more money into the pockets of consumers. But the price war—which involves US shale producers as well as Saudi and Russian interests—has caused global price benchmarks to  fall by two-thirds from  $60 per barrel in mid-February to  $20 per barrel today. Oil prices may remain this low for a long time.

In traditional downturns, low oil prices are an advantage. In the current crisis, however, policy should nudge the fossil fuel prices consumers pay back up to or above the levels prior to the OPEC-Russia price war and the onset of the coronavirus pandemic of early 2020.

The  Trump administration and the US Congress may not agree to this step in an election year, especially as the administration appears ready  to loosen US vehicle emissions standards, making US car owners more dependent on low oil prices. But Europe and the European Union, which earlier this year committed to complete decarbonization by 2050, should implement this policy for several reasons.

First, EU governments are incurring ever bigger deficits to fund emergency measures to combat the COVID-19 virus. The figure below illustrates the value of keeping fuel prices at the early 2020 level. 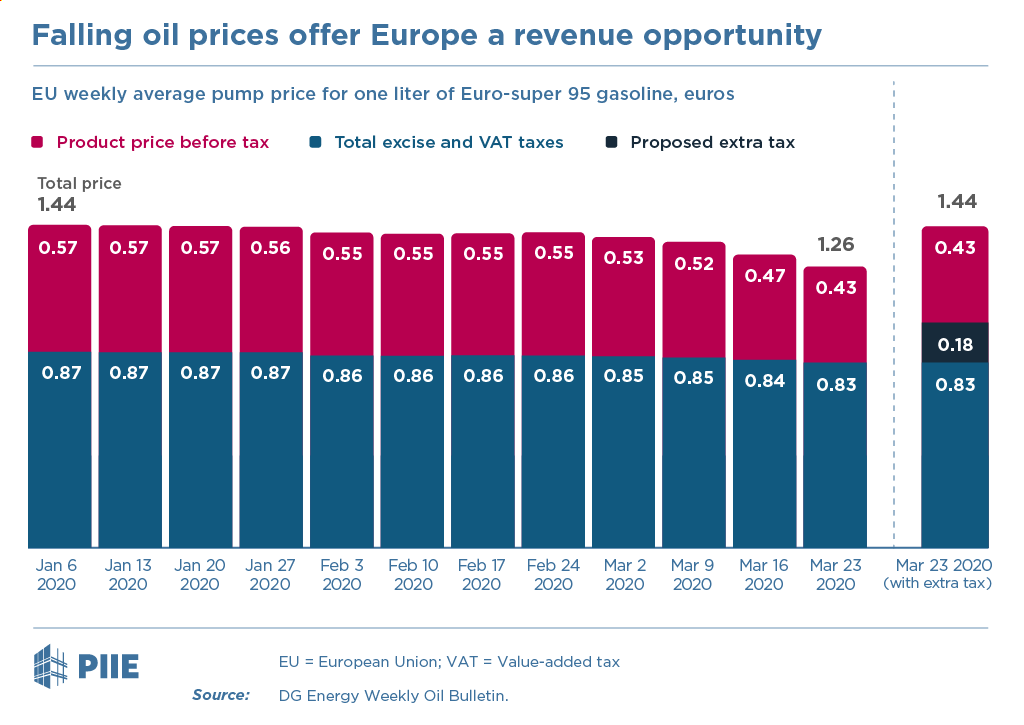 The average total price at the pump for a liter of Euro-super 95 gasoline (the most widely used gasoline grade across the EU) in January 2020 was €1.44, split between 87 cents (about 60 percent) in total taxes and 57 cents as the pre-tax price. By late March 2020 the pre-tax price had fallen by almost a quarter to just 43 cents,[1] and the total cost of a liter of gasoline on average in the EU was down to €1.26 per liter. In order to bring back the price of gasoline to the January 2020 level, EU governments should raise total taxation by the decline in the total price, on average about 18 cents per liter, to a total of about €1 per liter, a 22 percent increase in fuel taxes.

But the tax windfall resulting from the oil price plunge is not the only opportunity Europe should seize. Europe can strengthen its fight against climate change—its most important long-term challenge after the COVID-19 virus—at the same time. The European Union must think now about how to overcome the economic slump from COVID-19, and new public and private investments in the EU Green Deal will be essential to any recovery strategy. In order to ensure that private investors remain sufficiently incentivized to make such investments in the future, EU governments must maintain high fuel prices, preventing them from declining from their pre-pandemic level. With its ambitious 2050 carbon neutrality goal, the European Union cannot afford to lose three to five years of new green investments, potentially stifling investment in renewable energy, because of lower oil prices.

But as long as large-scale movement restrictions and quarantine measures are in place, gasoline consumption will remain subdued, despite lower prices. EU governments must therefore act to raise fossil fuel taxation on road, sea, and air transportation fuel prices before the European economies gradually return to normal. The prospects for long-term decarbonization in Europe depends on it.

1. Value-added taxes are estimated based on the pre-tax price of the product, so they decline somewhat at the same time.