The Eurogroup on Greece: Debt Relief with a Fiscal Straitjacket

Greece’s latest deal with the Eurogroup—the group of eurozone finance ministers—is bigger news than you might think from the press reactions so far. As expected, Greece got its next disbursement of funds to avoid default, the International Monetary Fund (IMF) gave a symbolic stamp of approval, no actual debt relief will transpire until the end of Greece’s EU-supported reform program, and the IMF will not be prepared to disburse until that happens (if at all). This feels like business as usual. But there is more to the story.

The June 15 statement of the Eurogroup contains at least three new and significant points. For the first time, it delivers an unequivocal commitment to debt relief. Second, it confirms that the Eurogroup (read: Germany) will accept interest deferrals as part of the package, a point that had recently been in doubt. Third, it lays out specific fiscal assumptions—not just for the next 2 or 5 years, but all the way to 2060. The first two are good news. On the third, the news is not so good, for reasons explained below. As a result, there is a high risk that the debt relief package that we will see next year—probably without endorsement by the IMF—will yet again kick the can down the road.

In its statement on May 25 last year, the Eurogroup “expected” to implement a set of debt relief measures including maturity extensions and interest deferrals “if an updated debt sustainability analysis (DSA) by the institutions at the end of the programme shows they are needed.” Last Thursday’s Eurogroup statement contains a similar sentence: “At the end of the programme, conditional upon its successful implementation and to the extent necessary, this second set of measures will be implemented.” But the context is entirely different. Last year, there was wild disagreement between the key parties—Germany, the European Commission, the IMF, and Greece—on what future fiscal primary surpluses Greece could reasonably be asked to produce. As Eike Kreplin, Ugo Panizza, and I showed in a recent PIIE Working Paper, the preferred assumptions of the German side at the time—and perhaps even those of the European Commission—implied no need for debt relief. So, the caveat “if an updated debt sustainability analysis…shows they are needed” was basically a loophole that would have allowed the Eurogroup to renege on meaningful debt relief measures.

This time, the Eurogroup statement lays out a full fiscal path until 2060. And as anyone can check using the DSA apparatus that we published along with our paper (an updated version is posted here), conditioning on that fiscal path, Greece’s future gross financing needs would blow up without debt relief—way beyond the upper limit of 20 percent of GDP that the Eurogroup has just reaffirmed. This proposition is true even based on the relatively optimistic growth assumptions of the European Commission—if the IMF’s assumptions were used, it would hold with even greater force. Here is the picture: 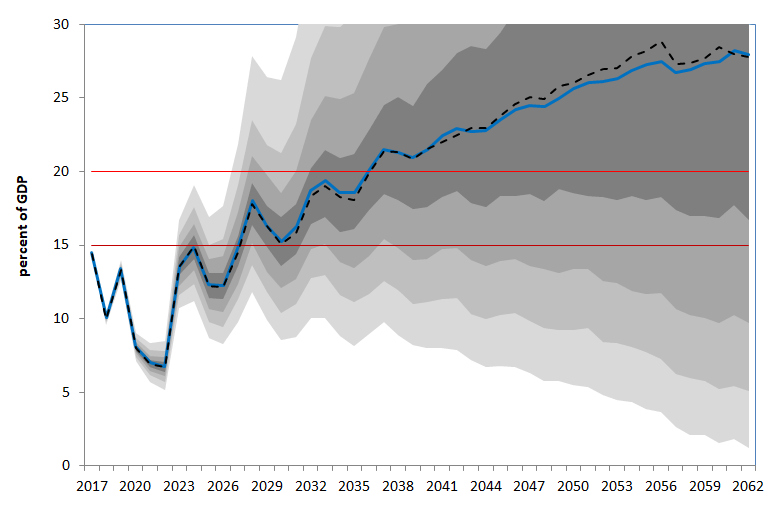 Note: The figure shows the evolution of Greece's gross financing needs (GFN) based on its current debt service obligations, assuming the fiscal path agreed at the Eurogroup meeting on June 15, 2017 and European Commission projections envisaging real growth rising to about 3 percent in the short and medium term and subsequently declining to long-run rate of 1.25 percent by 2030. The black dotted line describes the evolution of GFN if uncertainty is ignored. The blue line is the median of the distribution of GFN using a methodology that incorporates uncertainty. The boundaries between the shaded areas describe GFN at the 10th, 20th, 30th, 40th, 60th 70th, 80th, and 90th percentile levels of that distribution. The two red lines show the maximum range that GFN must exceed, according to the Eurogroup statement. For details on methodology and ancillary assumptions, see Zettelmeyer, Kreplin, and Panizza, “Does Greece Need More Official Debt Relief? If So, How Much?” PIIE Working Paper 17-6.

There is still disagreement (as well as genuine uncertainty) on how much debt relief Greece will need—hinging mostly on growth assumptions and on the private borrowing rate that Greece can expect after it reaccesses capital markets. But the fact that there will be significant debt relief is no longer in doubt. This is also clear from the comparatively direct, uncaveated language used elsewhere in the statement. For example, “The exact calibration of these measures will be confirmed at the end of the programme by the Eurogroup on the basis of an updated DSA.” The open questions refer to “exact calibration,” not debt relief per se.

Acceptance of EFSF Interest Deferral up to 2037 (and Possibly Beyond)

Our analysis of the Greek debt problem pointed out that the approach sketched by the Eurogroup in May last year would make the Greek debt sustainable only if it included extensive deferrals of interest payments to the European Financial Stability Facility (EFSF), Greece’s original crisis lender. However, these deferrals have an unpleasant implication: Since they are capitalized (rolled into principal), they imply a rising exposure of the EFSF to Greece. In effect, the EFSF would lend additional funds to Greece to allow it to pay its interest bill. We showed that, under plausible assumptions, EFSF claims on Greece might rise by almost €150 billion, more than the currently owed amount, before they slowly start declining. Even in 2080, Greece’s outstanding debts to the EFSF might still be higher than they are today. We speculated that this would not be acceptable to the conservative bench in the Eurogroup. And indeed, a few weeks after we circulated our paper, the Handelsblatt reported that the German Finance Ministry was taking a “Hard Line on Greek Interest Deferrals,” apparently based on calculations very similar to ours.

If this hard line had prevailed at the Eurogroup, it would have made debt relief of the kind demanded by the IMF difficult if not impossible. But it did not prevail. Instead, the Eurogroup opted for a compromise, allowing interest deferrals for an additional 15 years—that is, until 2037—“so long as the total established by the EFSF Programme Authorised Amount is respected.” That ceiling, €241 billion, is very unlikely to be binding over this period. On top of this, the Eurogroup statement envisages a “contingency mechanism on debt” that would allow “further EFSF re-profiling and capping and deferral of interest payments” in case of an unexpectedly adverse scenario.

A preliminary number-crunch shows that, conditional on the fiscal path agreed on Thursday and European Commission growth projections, interest deferrals and maturity extensions within the time frame envisaged by the Eurogroup statement would indeed be enough to make the Greek debt sustainable. Problem solved? Not necessarily. That depends on the realism of the underlying assumptions. And here, the news is not so good.

Fiscal Assumptions up to 2060

While the Eurogroup did not commit to a specific debt relief package, it was very specific in describing the fiscal assumptions of such a package—all the way to 2060. The fact that it did is good news. The content of what it described, however, is worrisome.

First the mostly positive side. The Eurogroup is now requiring Greece to maintain a 3.5 percent primary surplus for four years after this is attained in 2019, based on program assumptions. This is much shorter than what the European Commission had assumed before and—as we showed in our working paper—roughly in line with historical precedent. Although it is far from ideal—a country in which investment has collapsed and unemployment remains at 23 percent ought to be given more fiscal slack—it is achievable.

Now the bad news. For the period after 2022, the Eurogroup assumes “a fiscal trajectory that is consistent with its commitments under the European fiscal framework, which would be achieved according to the analysis of the European Commission with a primary surplus of equal to or above but close to 2 percent of GDP in the period from 2023 to 2060.”

Wow. A primary surplus of more than 2 percent, year after year, for a 40-year period? To our knowledge, this has never happened, in any country, since World War II. Forty-year spells with average primary surpluses of 2 percent have occurred, mostly in emerging-market countries. But even they are very rare. More generally, it is not clear that 40-year fiscal commitments have much meaning. The argument seems to be that it is not a new commitment but rather an implication of EU fiscal rules. But this raises the question why all European Commission scenarios so far envisaged a primary surplus of 1.5 rather than at least 2 percent of GDP over the same time horizon. Furthermore, the implementation record of EU fiscal rules historically has been poor—not just in Greece, but in many other EU countries.

In sum, the June 15 Eurogroup statement is the first to suggest a euro area consensus that significant debt relief will in fact happen if the current program is successfully completed––as now seems likely. To cite both Eurogroup president Jeroen Dijsselbloem and Greek finance minister Euclid Tsakalotos, this is a big step forward. Another important step is the confirmation that interest deferrals are fair game, within certain limits, in the context of any future debt deal.

Less reassuring, however, are the fiscal assumptions that the parties now appear to have agreed on. While a 3.5 percent primary surplus until 2022 can be justified using historical precedent, it will make it tough to revive public investment. And maintaining the surplus above 2 percent for an extra 37 years, as is now being assumed, would require unprecedented stamina.

To be clear, the point of a debt relief package is not to maximize the welfare of the debtor. It is to find a good balance between debtor interests, creditor interests, and maintaining good incentives for Greece and for the euro area more broadly. But this requires a realistic vision of what a country can deliver. The fiscal path assumed by the Eurogroup does not meet that standard. If a future debt relief package is built on that assumption, it will likely fall short.

Does Greece Need More Official Debt Relief? If So, How Much?