Taxing carbon is probably the most effective way of curbing greenhouse gases that cause climate change. But because taxing carbon emissions will raise gasoline and other energy costs for households and industry, it may be the most politically treacherous step any government can take. Undaunted, Europe should forge ahead with an ambitious plan to make the cost of using fossil fuels effectively exorbitant. The economic impact on Europe would be enormous. But Europe’s actions could also have a significant impact on the United States.

Several Democratic presidential candidates recently endorsed some form of carbon tax at a town hall meeting. But you won’t find much about carbon taxes in the various “Green New Deal” plans called for by candidates or members of Congress. Instead, most Green New Deal plans unveiled so far have morphed into vehicles to address social and economic inequity issues. Europe’s greener focus is therefore bold and instructive. It was enunciated recently by the incoming president of the European Commission, Ursula von der Leyen, who when addressing her new team of EU commissioners said: "I want the European Green Deal to become Europe's hallmark. At the heart of it is our commitment to becoming the world's first climate-neutral continent…. I want Europe to be the exporter of knowledge, technologies and best practice."

The price of carbon is rising again, but it will need to go higher

Reaching her grand goals will require fundamental changes to the European economy and indeed to Europeans’ way of life. But the price of carbon is already rising again, thanks to the recovering economy and recent reforms in the European Union’s emissions and trading system, the world's first major carbon market. These reforms reduced the amount of free carbon credits available, propelling the price on carbon up again to €25 to €30 per ton (see figure below). These increases improve Europe’s chance to fulfill its climate goals. 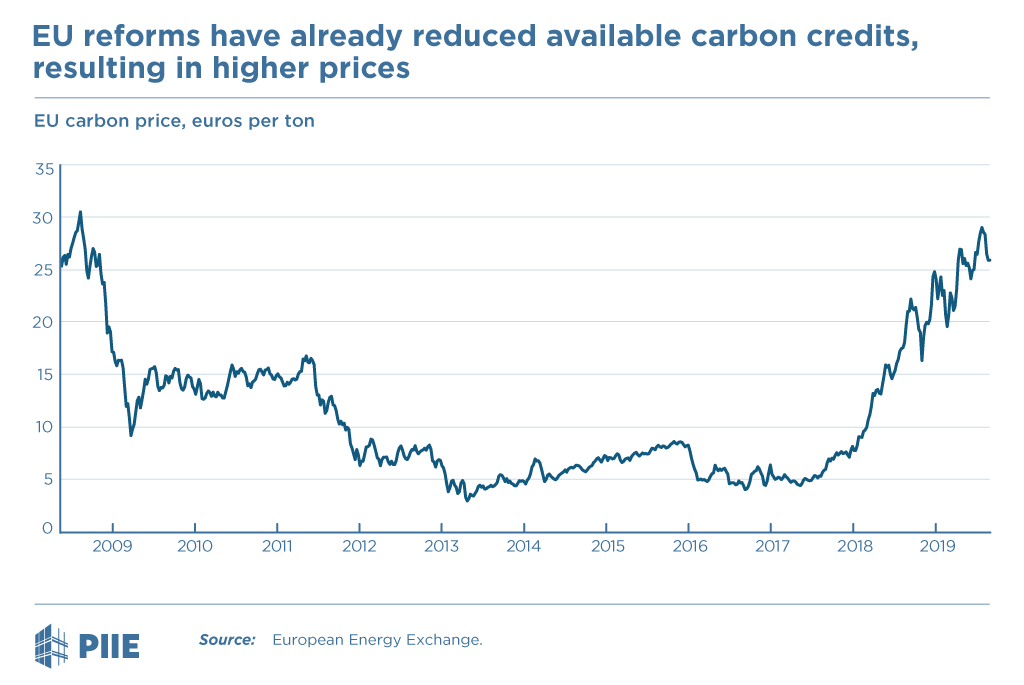 But for Europe to have a realistic chance of reaching carbon neutrality and for an EU Green New Deal to be anything other than a political figleaf, a far higher price on carbon will be required in the years ahead. How much higher will provoke a huge debate, but it is noteworthy that the five-fold increase in the price under the emissions and trading system in the last two years has not impeded Europe’s economic recovery. For the future, however, Von der Leyen’s target will cause significant economic dislocation. This is the point—European gasoline prices will rise further,[1] coal and even natural gas-powered electricity must become uncompetitive versus renewables, and jet fuel prices will rise. Advances in technology may soon eliminate bulk fuel for ships. Buildings and construction sites across Europe will have to be retrofitted and redesigned to reduce and eventually erase their carbon footprint.

Estimating the optimal price of carbon in Europe is likely to be futile. But a “Green New Deal” targeting carbon neutrality is at heart a political choice in Europe, requiring that it be easy to explain to the public to get its support. A big round number makes sense—perhaps €100 per ton in 2025 and rising.

But a price on carbon of that magnitude will require drastic reforms. The emissions and trading system system (ETS) would have to cover all EU economic sectors, and the number of carbon emissions credits available for trade would have to be further curtailed. In theory, member states could undertake these changes, fueling tensions among countries. The European Union may need to establish a minimum price for carbon. Such a price floor would have to be agreed decades into the future (i.e. made predictable) to enable businesses to adjust and ensure temporary business-cycle-driven drops in the carbon price are blunted and long-term investment incentives maintained. To secure the desired reduction in emissions, the price floor would have to rise faster—say 5 percentage points a year—than headline inflation. Alternatively, the European Union could also introduce an outright carbon tax on all emissions again, set at a higher level than current ETS prices and rising faster than inflation between now and 2050.[2]

A high carbon price has three important broader political and economic implications for the European Union:

A carbon border adjustment tax is inevitable. A carbon price of this magnitude will put EU businesses at a competitive disadvantage versus imported goods. Imposing a new carbon border adjustment tax is inevitable, effectively setting tariffs on imported goods from economies without equivalent carbon prices, perhaps exempting (or reimbursing) poor countries. Such a tax or tariff will certainly set up a confrontation with the United States, if the Trump administration’s policies continue. On the other hand, Senator Elizabeth Warren has called for tariffs on carbon intensive imports if she is elected president.

Carbon revenues will change the distribution of EU revenue generation and disbursements. The envisioned carbon price is designed to raise significant new government revenue. EU general government finances are today reasonably close to balance.[3] EU governments must therefore return these revenues to taxpayers. Shifting away from carbon fuels, though, will result in some existing sources of government revenue virtually disappearing (gasoline taxes for instance disappear once a shift to electric cars is complete). EU governments will therefore have to retain some of their new carbon revenue.

The European Union will likely also have to earmark a certain share of carbon revenues to projects explicitly mitigating the impact of climate change. Because many of these projects would be regional, a percentage should flow into the EU budget. To secure all member states’ support, some redistribution to help those dependent on carbon production, like Poland, will be called for.

A biting carbon price will render part of the EU’s capital stock obsolete. Shifting away from fossil fuels will destroy certain infrastructure and businesses, creating large groups of economic losers who—much like those suffering losses because of international trade—will need to be compensated through the carbon derived revenue. At the same time, the European Union can take advantage of a fortuitous set of macroeconomic circumstances to deliberately destroy parts of its existing capital stock right now. Interest rates are rock-bottom and European businesses have been net savers of capital in recent years, despite the low interest rates. This would be a perfect time to finance a significant investment-led EU economic growth plan. A high and comprehensive carbon price will create new incentives for private businesses to invest and provide a powerful new economic stimulus to European growth. European governments would face the same investment incentives.

The need to meet climate targets could even unlock the political will to create pan-European “Green Bonds”—issued by say the EU Commission and/or European Investment Bank (EIB) (and that the European Central Bank could purchase). This “common debt” would thus be earmarked to solve a commonly agreed European policy problem.

The historical analogy for a carbon price hike spurring investment-led growth is the situation Europe faced after World War II. Fighting had devastated large parts of Europe’s physical infrastructure, and a huge investment drive—partly financed by the US Marshall Plan—was required to rebuild and modernize it. German chancellor Angela Merkel recently said “We want to direct the behavior of people in a certain direction…. The pricing of CO2 is the right way to make clear that all innovations should follow the goal of emitting less CO2”—putting a serious price on carbon will offer rich rewards to those who invest and innovate to help Europe become carbon neutral.

An ambitious EU Green New Deal, including a biting carbon price would—peacefully—achieve much of the same outcome as Europe’s postwar reconstruction, unleashing another long period of high growth, and help solve the climate challenge in the process.

1. Reducing CO2 emissions sufficiently from the transportation sector is not, however, likely to be feasible in a timely manner with only a binding price on carbon. Instead, car and truck regulations will likely need to be tightened rapidly to mandate electric vehicles.

2. The need for comprehensive carbon pricing in Europe is increasingly widely acknowledged. See for instance the recent special report by the German Council of Economic Advisors.

3. The overall structural deficit in the European Union is estimated at around 1 percent of GDP.