Eight European Union (EU) banks failed and 16 "sort of failed" the EU latest stress tests. As a result, the eight must promptly raise an aggregate of about €2.5 billion in core tier 1 capital. For the 16 others, with core tier 1 capital between 5 percent and 6 percent and sizeable exposures to sovereigns under stress, the European Banking Authority (EBA) requests that national supervisors take steps to make them strengthen their capital position1.

The next step must now be for EU authorities to live up to their fighting words "to address decisively any remaining pockets of vulnerability in the EU banking sector2." To that end they need to swiftly implement the recapitalization of, not just the eight banks that failed, but the 16 that almost did. Regrettably, this seems quite unlikely to happen.3 The European banking crisis will thus continue to be only gradually addressed as part of the rolling and slow-moving recapitalization of the system that began after the financial crisis hit in 2008. While clearly tougher than in 2010, Europe’s 2011 "Goldilocks stress tests"—not too tough but not too easy—will not constitute a decisive solution to the continent’s crisis of undercapitalized banks.

Can something that doesn’t end the crisis and isn’t even truthful still be useful? It has been clear for months that the EU stress tests would not be truthful, since the adverse "stressful scenario" they utilized has long since been overtaken by reality in euro area bond markets. For understandable reasons, for example, the stress tests did not include a scenario for the "unthinkable," i.e. a sovereign default, because banking authorities could not be seen as raising the possibility of something they have vowed to avert. As a result, deterioration in sovereign bond markets is instead modeled in the stress tests through a series of country-specific shocks to sovereign credit spreads in the EU countries, with the widening of spreads reflected in implied valuation haircuts across different maturities4. Figure 1 shows just how far reality has surpassed the "adverse scenario" in this regard. 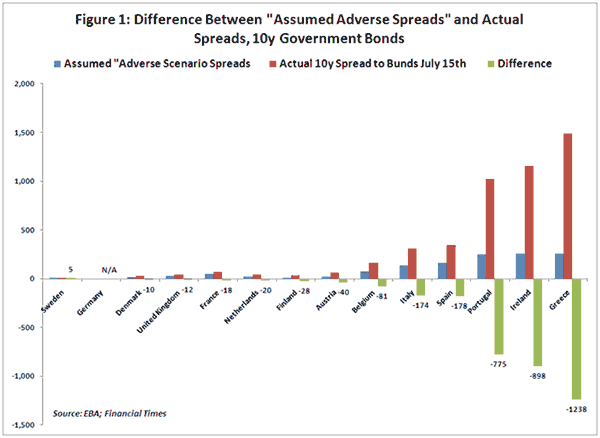 It is clear that for all the peripheral countries in the euro area, including now Spain and Italy, actual market spreads on July 15 were more than twice the assumed rate in the stress test adverse scenario, while in the case of the three ultra-peripherals, the ratio was between 4 and 6.

This is a "fairytale adversity" scenario that on one level renders the whole exercise meaningless. Yet, given the traditionally high level of sovereign debt in the EU banking systems, the capitalization levels of individual banks will inevitably be dictated by the "health of their sovereign." Put another way, if governments in the euro area act irresponsibly, it inevitably sinks their banking systems, irrespective of how much capital their banks set aside. Therefore, since the current elevated stress levels in the sovereign bond markets are related to the recent euro area discussions about the scope of "private sector participation (PSI) in the second Greek bailout—the official euphemism for banks having to take a haircut on their debt—using today’s very high government bond spreads would also not be appropriate.

As long as euro area governments dither about whether to force haircuts by private investors when a country faces liquidity challenges—as opposed to being clearly insolvent—bank stress tests that rely on current sovereign bond yields will overestimate the capital losses faced by EU banks. In other words, bank stress tests should not assume that euro area governments will fail to get a political compromise relating to Greek PSI that restricts contagion in euro area sovereign debt markets.

In addition, an overly severe judgment of the credibility of the stress tests would miss the critical importance of the improved transparency they have delivered. Each of the 90 tested banks has been compelled by the EBA to disclose far more information about their balance sheet than ever before. The published stress test data provide an overview of each bank’s holdings of sovereign bonds by maturity, derivative sovereign exposures, real estate, mortgage, commercial real estate and other capital components.

As a result, market analysts can easily now create their own detailed and far more realistic stress scenarios for each bank and their exposures to sovereign bonds and other factors. This again should rapidly reflect itself on banks’ share prices and their access to wholesale funding markets for liquidity5. Bank data showing serious capital weaknesses should suffer lower share prices and higher cost of funding.

With respect to liquidity, the increased bank transparency might help remove some banks from the list of "dependent banks" in the euro area. These banks have no access to private credit markets and thus must rely on the ECB for liquidity. On the other hand, given the widespread bank capital weaknesses uncovered in the published data, the stress tests are probably more likely to add to the list of "dependent banks."

The stress tests in the end put the focus on the ECB’s longer-term response to the issue of "dependent banks" in the euro area and how the central bank will handle these after their current unlimited liquidity provision is scheduled to end in September 2011. Hopefully, the ECB will take this opportunity to push EU banks (and their national governments) to accelerate their recapitalization. Despite its potential fiscal policy implications, the ECB’s push for more pro-active euro area governments will ring hollow if the ECB refuses to take up this opportunity. The ECB should create a new "conditional liquidity facility" for "dependent banks," compelling them in return to initiate or accelerate the rebuilding of their equity. With such a facility the ECB would give itself a critical instrument with which to accelerate the necessary banking sector recapitalization in the euro area.

A final positive from these tests is that the newly created EBA has passed its own "institutional integrity test" and proven itself to possess the embryo of a strong independent euro area regulator. Particularly impressive was the willingness of the EBA to be firmer than previously on the slippery definition of "core Tier 1 capital" in the face of banks and national banking regulators’ protests.

1. One noticeable improvement in the publication of the stress tests this year has been the centralized availability of the data. The EBA has this time made it all available in one big spreadsheet [xls].

3. The Bank of Spain for instance has already announced that it, due to differences in the definition of capital with the EBA, will not force Spanish banks to recapitalize further as a result of these tests. See http://www.bde.es/webbde/en/secciones/prensa/Notas_Informativ/anoactual/presbe2011_28e.pdf

5. At the time of writing Tuesday, July 19, this has already happened with numerous investment banks’ banking analyst teams publishing tougher "acid tests" based on the newly disclosed figures.

Europe's Made-in-America Tools to Deal with Its Financial Crisis

Why Europe Can Cope with Its Latest Crisis