At first glance, the $51 billion cost to large corporate employers arising from a hypothetical increase in low-wage pay to $16 per hour seems significant.1 When compared to the $5.61 trillion total of private sector wages paid in 2013,2 the proposed increase amounts to a 0.9 percent increase in aggregate wages or 1.1 percent increase in average wages. There may be a 0.3 percent of GDP redistribution from corporate profits to labor and a small bump in aggregate demand—depending on whether increases result in productivity gains or are passed through into prices. Because this proposal would be undertaken voluntarily by larger corporations with smaller shares of low-income workers, it should not affect hiring at the margin, thereby leaving the unemployment rate unchanged. 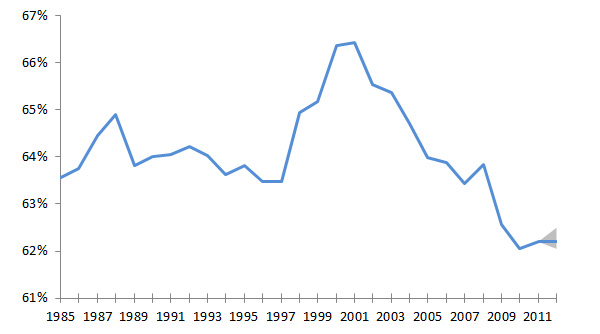 The cost of raising wages to $16 an hour for all low-paid workers, as Aetna has announced it will do, would likely be mitigated by any improvement in productivity that results, as indicated in a separate posting by my PIIE colleagues Justin Wolfers and Jan Zilinsky. In this scenario the productivity increase would offset fully or potentially even exceed the 0.3 percent of GDP increase in wages. A similar offset would occur if corporations raised prices to offset the wage increase. As a result labor's share of GDP would either remain unchanged or potentially even decrease slightly. A second scenario demonstrates what would happen if there is no increase in productivity or in prices—the 0.3 percent of GDP is transferred from corporations to labor in the form of a real wage increase, so labor's share of GDP increases by 0.3 percent. The very small grey band at the end of figure 1 shows these changes in a historical context. 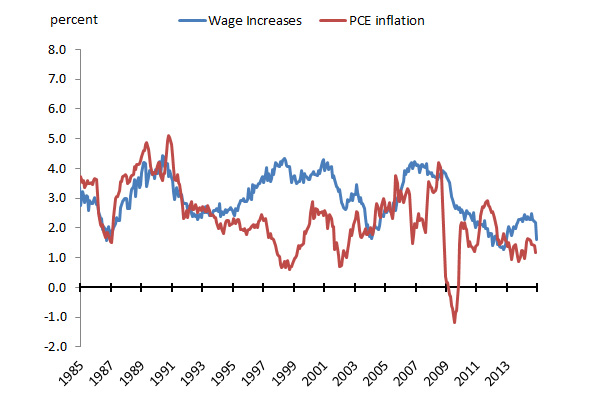 What of the effect on wages and inflation? Their historical trends are presented in figure 2. Wage inflation measured by average hourly earnings of production and nonsupervisory employees4—the type of employees affected by this proposal—has been stable for 30 years, with 12-month changes in earnings between 1.3 percent and 4.4 percent, with an average of 3.0 percent. Prices paid by consumers, here represented by Personal Consumption Expenditures (PCE) inflation numbers, have also increased at a moderate rate. Both wage increases and consumer prices have been depressed for some time, consistently undershooting Fed targets, and inflation expectations have been well anchored throughout the crisis.5

Based on my colleague Tomas Hellebrandt's calculations using Current Population Survey data, the proposal would increase average wages of all private workers by 1.1 percent, which would likely be phased in over time. Therefore, it is likely any price effects would be on the scale of 0.1 percent a month rather than a sudden jump. Considering the low inflation environment now in existence, an additional 0.1 increase in wages or PCE inflation in figure 2 does not look like a problem. And that effect would occur only if the labor costs are directly passed on to consumers by businesses, rather than being offset by productivity gains.

3. There are numerous explanations of why this may be. See, for example, Dylan Matthews, Robots, trade, and four other things that might be keeping you from getting a raise, January 8, 2015, Vox.