For years, observers of the European Central Bank (ECB) have been hearing the same line from its former President, Jean Claude Trichet: "We have one needle in our compass, and that is price stability." This precept should contribute to understanding the central bank's policy stance: When price stability is assured, there is no need to change policy. When price stability is at risk, policy should be changed to fulfill the mandate.

This has been a clear constant for the nearly decade and a half of the ECB's existence. Achieving 2 percent inflation has been portrayed as a show of success. In fact, the ECB's leadership has often reminded markets, colleagues, and academics of their impressive record, noting that, until recently, inflation in the euro area has averaged 2 percent since the ECB's inception.

But that was the past. Is the euro area now facing a period of downward price instability? The recent combination of data and policies is introducing a legitimate fear of disinflation. Following several months of deceleration, annual inflation in the euro area was a mere 1.2 percent in April, down from 2.6 percent a year earlier, showing a clear underlying disinflationary trend. 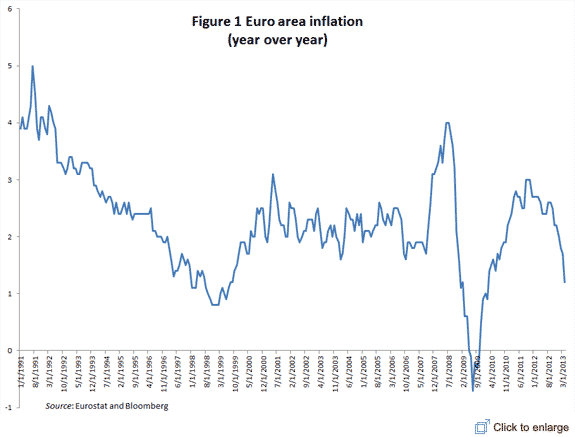 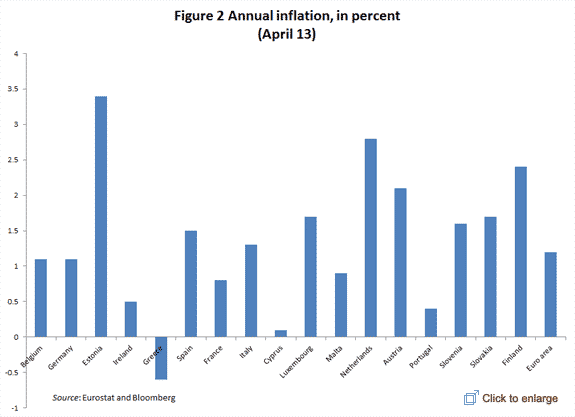 Inflation in the euro area is in a clear downward trend—and, sadly, this is not unexpected. The reason is that the euro area has spent the last few years in a low growth path combined with policies that have not only been tight, but also in some countries targeted at producing disinflation. Let's not forget that a cornerstone of the recent policy mix in the euro area has been to achieve an internal devaluation: a reduction of wage growth, combined with structural reforms, to try to regain competitiveness. And, in fact, as a result of labor market reforms, wage growth has collapsed in some traditionally high wage growth countries, such as Spain, where wage growth fell to essentially zero in 2012. The resulting combination of tight fiscal, regulatory, and credit policies has suppressed demand in the euro area, leading to an output gap estimated at 3 percent of potential GDP by the IMF, and a poor growth outlook for the next few years, implying an inflation forecast that is unlikely to return to 2 percent in the next few years.

I had the privilege of being a founding member of the ECB's Shadow Governing Council, and serving on it for 10 years. In that capacity, I spent time every month during that decade debating with colleagues what the ECB should do. In the early days of the ECB, there was a strong debate about the risk of deflation in Germany and in the euro area. In 2002–03, German growth was weak and inflation was a mere 1 percent. At that time, Ottmar Issing, the ECB's Executive Board member in charge of economics and research, used to argue that there could be isolated cases of deflation in a euro area country, but not in the euro area as a whole. He was right. The German malaise was an isolated case, while the rest of the euro area contributed support for more growth and inflation.

The situation now is very different. The risks to euro area price stability are clearly to the downside. On the economic side, the euro area outlook is weak. It is not just the periphery, still in the middle of a deflationary process of adjustment. France is mired in weak growth, weak inflation, and weak competitiveness. And Germany is not ready to compensate by implementing necessary reforms to boost domestic demand through service sector liberalization that promotes domestic investment. On the monetary side, M3 growth, adjusted for portfolio shifts, is just 2 percent—remember the 5 percent growth reference target? And euro area credit growth has been negative on an annual basis for a while now.

In such an environment, deflationary expectations can sink in. Yes, euro area breakeven inflation rates remain anchored at around 2 percent. But one has to wonder about the internal consistency of these expectations: Breakeven inflation expectations extracted from German bunds are just 1.2 percent for the next five years. Is it really credible that the rest of the euro area is going to generate 3 percent inflation over the next five years, in order to achieve 2 percent euro area inflation, given the set of policies in place? Expectations—always subject to change—can quickly shift under recessionary conditions accompanied by harsh wage adjustments that might include nominal wage cuts. In this context, the traditional downward rigidity of core inflation may disappear. And if it does, it may be too late to correct it.

This is the outlook that the euro area is facing today. The buffer against further negative economic shocks is very thin, if at all, and the fragile European social fabric is under tremendous stress from high unemployment. With this in mind, one could argue, as I did earlier in the year in this Policy Brief, that the downside risks to price stability in the euro area are large, and the current policy mix should be adjusted accordingly. If fiscal, credit, and regulatory policies must remain tight, then the ECB is the only game in town and it must step up to the plate. The issue is no longer bailing out governments or creating moral hazard. It is simple: The needle of the ECB's compass is pointing downward, and the ECB must react to fulfill its mandate and eliminate the deflationary risks.

What to do? The experience of other central banks points to plenty of options. Interest rates are zero in Switzerland. There is explicit forward-looking guidance in the United States and Japan. There are lending programs in the United Kingdom. There are purchases of private and public assets in the United States and Japan. And let's put to rest the urban legend that quantitative easing (QE) is forbidden by the Maastricht Treaty. QE, defined as purchases of government bonds of all euro area countries in the secondary market—for example, a weighted basket of euro area government bonds—is certainly allowed by the treaty as a monetary policy tool. In fact, the Bank of England is subject to the same treaty as the ECB and has already implemented several rounds of QE. The ECB has just decided to interpret the Maastricht Treaty in a very restrictive political way.

The ECB could take other steps as well. The program of outright monetary transactions (OMT) has successfully lowered yields in the front end of the curve, but it has not lowered longer term yields. Spreads in the euro area periphery are still in the range of 300 basis points. As a result, average 10-year rates in the euro area are higher than they should be. Financial conditions are thus too tight. To ease policy, the ECB could modify the OMT program so that it would be allowed the purchase of bonds along the whole maturity spectrum, not just up to three years in maturity. By providing implicit support along the whole curve, this step would likely lower average long term rates and ease financial conditions. More important, the ECB would signal that it is out of the politically charged moral hazard business and back into trying to meet its price stability mandate. As the recent Pew Global Attitudes Project poll shows, rising prices are the least of the worries of Europeans—even in Germany—while unemployment is the biggest worry. A decisive step towards the restoration of price stability will support confidence and growth. The ECB's well-earned anti-inflation credibility should be used now.

The ECB Throws down the Gauntlet

A New ECB Outlook? Part I