In recent months, it has looked as if all the major nominally independent central banks in advanced economies are committed to, or seriously contemplating, intervention in the markets to lower the value of their currencies. Excluding commodity exporters like Canada, Australia, and Norway, everyone is on board—except the European Central Bank (ECB).

Since September 2011, for example, the Swiss Central Bank (SNB) has been buying as many euros as required to stop the Swiss franc rising about CHF1.20/1€. As pointed out by my colleagues Joseph Gagnon and C. Fred Bergsten , the SNB has consequently accumulated hundreds of billions of additional foreign exchange reserves.

Recently in Japan, the new Prime Minister, Shinzo Abe, has arguably claimed a public mandate for a lower yen based on his election victory following a campaign in which he aggressively lectured the Bank of Japan about the need for more stimulus. As a result, the yen has come down substantially in recent weeks in the expectation of a much more expansive monetary policy in Japan. The Bank of Japan recently responded in a joint statement with the new Japanese government committing itself to a new 2 percent inflation target and potentially unlimited asset purchases, starting in 2014 .

The US Federal Reserve, of course, is in a different position. The Fed maintains that its policy to undertake quantitative easing is motivated by a desire to spur the US economy, not to devalue the dollar. In the eyes of many other countries, however, driving down the value of the world's anchor currency is seen differently. Countries that are lectured about the dangers of competitive devaluation understandably complain more when the monetary hegemon does it. The Fed's action may also simply lead to higher commodity prices, and when gasoline prices in the United States go up, they could negatively affect the Fed's stated goal of increasing US growth rates. At a minimum, it is unarguable that the Federal Reserve has implemented an expansionary monetary policy with little if any regard for the effects on the external value of the dollar. Compared to the "strong dollar mantra" of the 1980s and 1990s, that seems quite a change. If the Fed's actions stimulate the US economy, causing the value of the dollar to fall, few in the US government would mind.

In the United Kingdom, Bank of England (BoE) governor Mervin King noted last November that the recent strength of the British pound "was not a welcome development." His sentiments have been echoed by the BoE's newest rate setter, Ian McCafferty, who recently questioned "whether sterling is now at a competitive level in terms of allowing that fundamental rebalancing [of the UK economy]." These comments, combined with the crisis-time endorsement of nominal GDP-targeting by the incoming BoE governor, Mark Carney, make clear that few tears would be shed in London if the British pound were to decline in value as a result. It is hard to imagine that the Conservative government, which proved willing to pay Mark Carney a generous package to run the BoE, and which has had to admit that its fiscal austerity policy would continue into the next election period, would oppose monetary policy measures to boost UK growth ahead of the next elections in the spring of 2015.

Meanwhile, in 2012 the euro area returned to close to its largest trade surpluses ever in euro terms (figure 1) of more than €80 billion on a 12-month rolling basis, amounting to nearly 1 percent of euro area third quarter 2012 annualized GDP.1 Figure 1 further shows how this improvement in the euro area's external balance during 2012 has resulted not only from stagnating imports caused by depressed domestic demand at a time of fiscal consolidation, but also rising exports.

One might even assume that euro area policymakers and the ECB would welcome a weak euro to sustain the export revival, which has especially benefitted peripheral countries at a time of fiscal consolidation and subdued domestic growth.

Outgoing euro area chairman Jean-Claude Juncker was last week quoted as saying that the euro was too high.

His comments reinforced the impression that at least some euro area governments would agree. But at Juncker's press conference on Monday, he declared that he had been misquoted and had not commented on the value of the euro. Incoming Euro Group president, the Dutch finance minister, Jeroen Dijsselbloem, was also unwilling to discuss the value of the euro exchange rate.

It is also quite clear what the ECB thinks about this issue. The most recent direct comment on the euro exchange rate by a member of the ECB Governing Board came on January 16 from Ewald Nowotny, who noted that the "current exchange rate of the euro against the dollar is not a concern." And Mario Draghi, president of the ECB, said at his last press conference: "The exchange rate is certainly a very important element as far as growth and price stability are concerned, and we certainly use it as one of the elements in our economic assessment. But it is not a policy target.... Let me finally add that, so far, both the real and the effective exchange rate of the euro are at their long-term average."

Figure 2 shows the long-term developments of the real effective euro area exchange rate, as calculated by the ECB itself, underlining Mario Draghi's point. 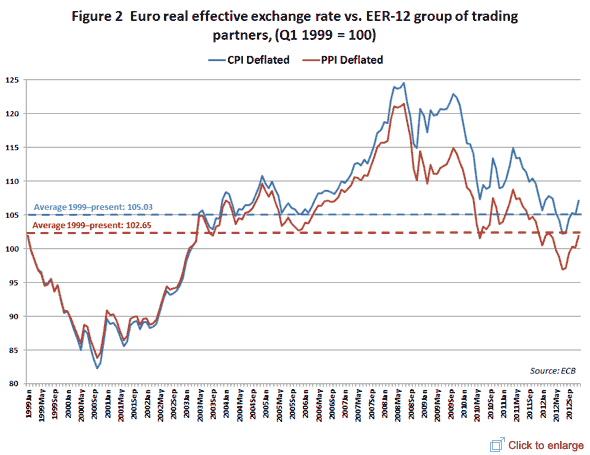 One lesson here is that the ECB's crisis behavior has differed from that of other major central banks since 2009. Unlike other major central banks, the ECB has at no point acted principally out of a desire to boost economic growth or make life easier for governments. As highlighted on RealTime numerous times, the unique institutional independence of the ECB, combined with its desperately needed crisis intervention powers, has led to policies aimed at forcing euro area governments to deliver on its political demands for austerity, structural reforms, and euro area institutional deepening. The euro area crisis has stabilized, due not least to ECB actions. But fiscal consolidation, structural reform and euro area institutional deepening are far from completed. The ECB will not likely shift its modus operandi and conduct a monetary policy aimed at making life easier for euro area governments. Unless the euro area real effective exchange rates rise a lot more, the ECB is not likely to adopt policies explicitly or implicitly aimed at lowering the value of the euro. Doing so would have the effect of bailing out euro area governments recalcitrant toward reform.

There is little the ECB can do anyway. It could try verbal intervention, but in the face of actual policy actions by other major central banks, mere words would not be credible for long. ECB interest rates are already close to zero, and the bank is hardly inclined to adopt negative policy rates—or any other expansion of its balance sheet through more non-standard measures—to drive down the value of the euro, given its hesitance on that score at the height of the euro area crisis. It simply will not happen, especially in a German election year in which Chancellor Angela Merkel would not want to defend her support of the bank's other policies, such as the Outright Monetary Transactions (OMT), in front of German voters. Draghi, an astute politician, understands this well.

Finally, why would the ECB placate euro area policymakers clamoring for a lower euro in the future? The bank, since the crisis began, has repeatedly stared them down over domestic reform demands more politically toxic than the euro exchange rate. Its tactics have forced peripheral euro area governments to restore competitiveness through tough wage restraint, wage cuts, and structural reforms. These policies have succeeded. Combined with rapidly rising German wages, the euro area is rebalancing and regaining export competitiveness for peripheral countries. The boost to competitiveness from firm-level wage bargaining and other steps should dwarf the impact of even a significant rise in the euro exchange rate. There is thus no reason for the ECB to change policy.

The ECB seems destined to stand apart from advanced economy central banks and sit on its hands this year, a reflection of financial market normalization, if not monetary tightening. Accordingly it will likely be the only major central bank to shrink its balance sheet in 2013, as some euro banks begin early repayment of their three-year loans under the central bank's long-term refinancing operation (LTRO) program. (Indeed, early indications suggest that euro area banks may prepay up to 30 percent of their three-year LTRO loans in early 2013.) This, however, does not amount to a monetary tightening, but rather a gradual return of liquidity to euro area interbank lending markets. Of course a Spanish or other euro area member request for an OMT program might counter the downward trend in the ECB balance sheet.

But in general, do not expect the ECB to stand in the way of a euro appreciation in the coming year.

The German Establishment—Principled but Pragmatic