On August 22 in Jackson Hole, Mario Draghi, president of the European Central Bank (ECB), achieved an important breakthrough in the thinking of euro area authorities. He did so by acknowledging for the first time that inflation expectations could become unanchored from the central bank's 2 percent target, declining dangerously below that level and requiring a program of monetary and fiscal demand stimulus. This is the key paragraph of his speech:

"Over the month of August financial markets have indicated that inflation expectations exhibited significant declines at all horizons. The 5year/5year swap rate declined by 15 basis points to just below 2 percent—this is the metric that we usually use for defining medium term inflation. But if we go to shorter and medium term horizons the revisions have been even more significant. The real rates on the short and medium term have gone up, on the long term they haven't gone up because we are witnessing a decline in long-term nominal rates, not only in the euro area but everywhere really. The Governing Council will acknowledge these developments and within its mandate will use all the available instruments needed to ensure price stability over the medium term."1

Draghi focused on 5-year average inflation in 5 years' time, the standard measure of a central bank's credibility, reflecting the assumption that the effect of any shock that could generate a transitory deviation from the inflation target will have dissipated after 5 years. The current decline in this metric to a level below 2 percent is now being seen as a signal that markets are starting to have doubts about the ECB's resolve to deliver 2 percent inflation.

But the situation is even worse when one looks at the next ten years in detail. Figure 1 shows the term structure of forward inflation rates. It shows the market pricing of 1-year average inflation starting in 1 year, in 2 years, etc., all the way to 9 years ahead. The red line shows the curve for the period 2005–06. During that time, there were no doubts about the ECB's inflation credibility, and the curve was stable around 2.15–2.25 percent. This record implied expected inflation of around 2 percent plus some positive term premium and provides a good benchmark to evaluate the current situation. 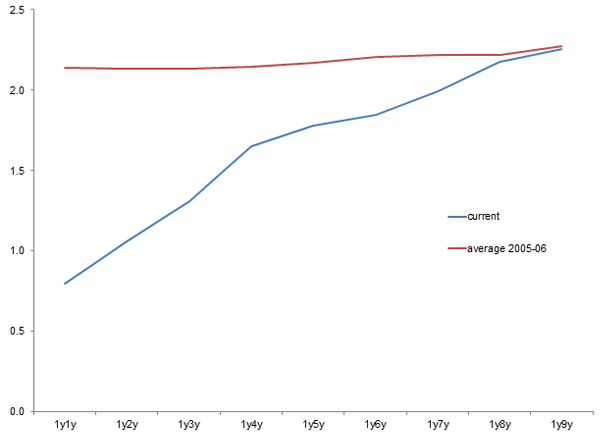 The blue line shows the current pricing: Markets are only expecting annual inflation to average 2 percent in 8 to 9 years. In other words, markets do not expect the ECB to credibly meet its price stability mandate until 2022. No wonder the ECB is worried. One of the principles of central banking is that monetary policy should react before inflation expectations become unanchored from the target, because otherwise it becomes too late.

I have warned about this risk in a Policy Brief in February of this year and commented after the ECB's decisions in June that they were a good step in the right direction but likely not enough to restore price stability . The reasoning was that the deflationary pressure in the euro area economy is strong. The stance of monetary policy is too tight: Figure 2 shows that long-term real interest rates remain higher in the euro area than in the United States or in the United Kingdom. (Note that even if euro area nominal long-term interest rates have declined, inflation expectations have also declined, and thus long-term real interest rates have barely moved.) In this context, the equilibrium real interest rate is likely negative as a result of the ongoing deleveraging process by individuals and institutions.2 Meanwhile, generally speaking, fiscal policy in the euro area remains mildly contractionary. In addition, the reforms in several countries, to the extent that they are successful (for example the labor market reforms in Spain), have increased potential growth and thus increased the output gap. In other words, there is a large demand shortfall in the euro area that explains the recent sharp decline in inflation.

This demand stimulus is also critical to prevent long-term higher unemployment resulting from the current spike in unemployment, known as hysteresis effects. President Draghi puts it nicely in his speech:

"The only conclusion we can safely draw, in my view, is that we need action on both sides of the economy: aggregate demand policies have to be accompanied by national structural policies. Demand side policies are not only justified by the significant cyclical component in unemployment. They are also relevant because, given prevailing uncertainty, they help insure against the risk that a weak economy is contributing to hysteresis effects. Indeed, while in normal conditions uncertainty would imply a higher degree of caution for fear of over-shooting, at present the situation is different. The risks of 'doing too little'—i.e. that cyclical unemployment becomes structural—outweigh those of 'doing too much'—that is, excessive upward wage and price pressures."

President Draghi could not be more right: The economic recovery has stalled, and it is time to err on the side of doing too much. The best option for the central bank is to launch a program of open-ended quantitative easing conditional on achieving price stability. Such a step would involve buying a monthly amount of assets (in the case of the euro area a GDP-weighted basket of both public and private assets of each euro area country) until the central bank can credibly and sustainably forecast 2 percent inflation over the medium term.

In a recent paper I document that the recent experience with nonconventional monetary policies is conclusive: They have a positive effect when they provide insurance on the economic outlook (in other words, when asset purchases are made conditional on the achievement of economic targets and not defined as a fixed quantity). Governments have to do their part developing and applying structural reforms that boost potential growth. But it is also time for the ECB to provide insurance to achieve its mandate and complement these reform efforts. 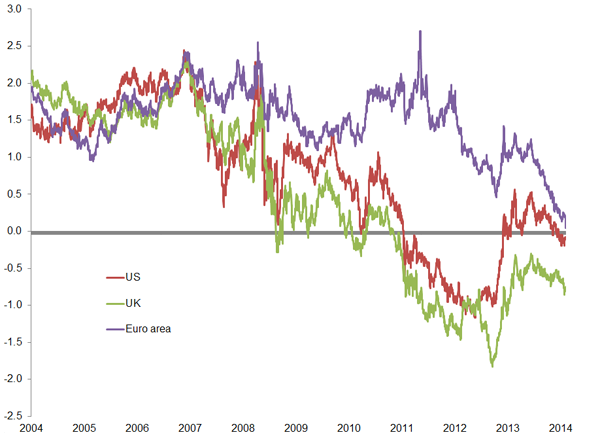 Note: Long term real interest rates are defined as 10-year nominal rates minus 10-year inflation swaps; for the euro area, this is a weighted average of a basket of euro area countries.

2. The euro area is, in fact, the prime candidate for the secular stagnation hypothesis; see the discussion on Vox.

A New ECB Outlook? Part I

If Not Quantitative Easing, What Can the European Central Bank Do?