Second in a series of postings on the European economic and budget situation. I am grateful to Natalia Aivazova for valuable research assistance. See also A Reassuring Choice for the Central Bank of Russia.

Corporate profit taxes have fallen like stones throughout Western Europe in the last three decades. At the same time, their revenues as a share of GDP have risen universally. Tax revenues have surged most of all in places where corporate tax rates are particularly low. With regard to corporate taxes, the Reagan era economist Arthur Laffer was perfectly right: Lower rates do yield higher revenues. In sharp contrast, the United States maintains the highest corporate profit tax in the world for no good purpose.

Empirical evidence on taxes is rarely as simple and straightforward as it is for corporate profit taxes. The evidence on the west from the Organization for Economic Cooperation and Development (OECD) is ample. A comparison between the 15 old members of the European Union (EU-15)1 with the United States is particularly illuminating. These numbers include both central government and local government taxes. 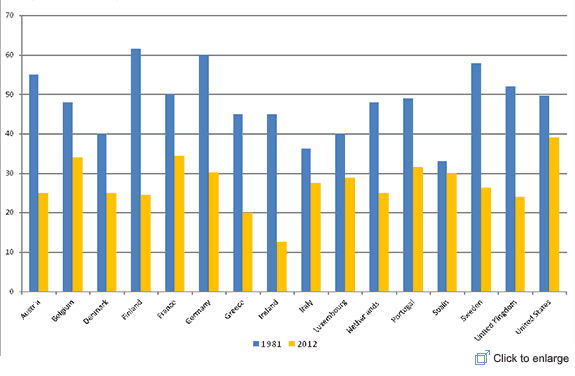 Revenues from corporate profit taxes have always been small. A standard assumption has been that they would fall with the tax rate, but the opposite has happened. In 1981, the EU-15 countries collected an average of 2.0 percent of GDP in corporate profit tax, while in 2007, just before the global financial crisis, these revenues peaked at 3.5 percent of GDP, marking a rise of 74 percent. During the financial crisis, these revenues declined somewhat but they were still 2.7 percent of GDP in 2011.

Nor do countries with high tax rates collect more tax revenues. Significantly, Ireland, with a corporate profit tax rate of 12.5 percent, collected 2.3 percent of GDP in revenues, while Germany's  tax rate of 30 percent collected 1.7 percent of GDP. Presumably, this reflects vigorous tax competition. Either companies or their profits move to European countries with low taxes. Figure 2 shows the corporate tax revenues as a share of GDP in 1981 and 2010. Tax revenues have risen almost universally (in 12 out of 15 old EU countries), while rates have plummeted. The correlation between the nominal tax rate and tax revenues is clearly negative. 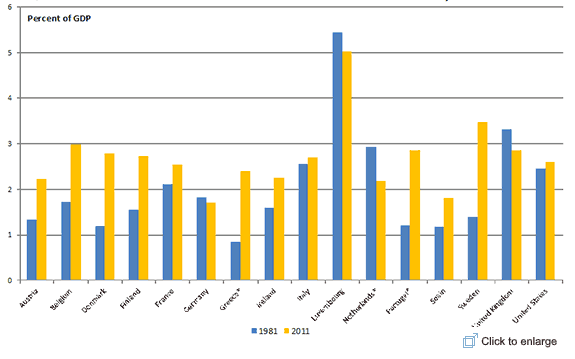 Note: For Greece and the Netherlands 2010 data is used. For Portugal data from 1989 and 2010 is used.
Source: Organization for Economic Cooperation and Development (OECD) Tax Database. Acessed on March 12, 2013. Available at: http://stats.oecd.org/Index.aspx?DataSetCode=REV.

The United States, by contrast, has barely seen any increase in its corporate tax revenues since it has insisted on a suboptimally high tax rate. With a tax rate that is almost twice as high as the average profit tax in the EU-15, it collects a smaller share of GDP in revenue.

The simple conclusion is that it makes no sense to have a high corporate profit tax. They are entirely harmful both to enterprise and tax revenues. As in so many other cases, the reformers in Eastern Europe have shown the way. They have cut their standard tax rate for corporate profits to 15 to 19 percent, while abolishing almost all loopholes and thus simplifying taxation.

In an important book, Tax Politics in Eastern Europe (2011), Hilary Appel argued that corporate profit tax has been driven down by tax competition within Eastern Europe. She notices that the Eastern European "governments have repeatedly lowered corporate tax rates... to attract and motivate investment," and their public statements "indicate that they are paying attention to the tax rates set by their counterparts abroad."

The Eastern Europeans have spearheaded the tax competition, but the same process has taken place in Western Europe. Although French and German leaders regularly accuse other countries of "tax dumping," another term for lowering one's tax to lure business, they participate in the same race, although they are the laggards. The tax cuts have not been radical or concentrated in time, but gradual and spread out over three decades. In 2000, the conservative Estonian government drew the ultimate conclusion and abolished corporate profit taxes as harmful to enterprise.

A concern is that incomes, especially of the very rich, are fungible and may take the form of corporate profits or personal incomes depending on taxation. Presumably, the low corporate tax rates have been a major cause of the rise of enterprise profits at the expense of salaries in most of the west in the last two decades. The rational reaction is to lower personal income taxes and align them with the level of corporate profit taxes. In 2004, Slovakia started this trend in Eastern Europe. Within the European Union, Romania, Bulgaria, and the Czech Republic followed suit. All adopted flat income and profit taxes from 10 to 19 percent. In wealthier countries, though, flat low personal income taxes are not as yet accepted, while low corporate profit taxes are.

The slimming down of corporate profit taxes continues in Europe. Sweden and Denmark have just decided to reduce their rates from 26.3 and 25 percent, respectively, to 22 percent. France and Belgium stand out as the two laggards maintaining rates of 34 percent.

Former US Treasury Secretary Paul O'Neill used to argue that the corporate profit taxes cost the companies about as much in preparation and planning as the state received, rendering it completely inefficient. Strangely, the United States insists on a nominal corporate profit tax rate that is nearly twice of the EU average, although the overall tax burden is much smaller in the United States. The irony is that the United States also offers far more loopholes than any other country. Numerous famous large US companies get away without paying any profit taxes, while many small firms are encumbered, making the corporate tax capricious and arbitrary as well as counterproductive. The average real corporate profit tax is low and revenues are less than in the European Union. It is difficult to imagine a worse tax system.

It is high time for the United States to become as rational as Europe about corporate profit taxes.

How to Discourage Currency Manipulation: Tax It Heavily