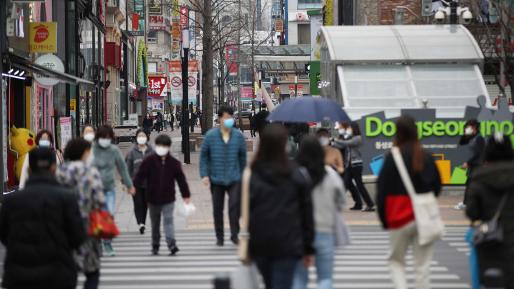 PIIE gratefully acknowledges funding from the Ministry of Economy and Finance (MOEF), Republic of Korea, for the research presented in this blog post. The research was conducted independently. Funders are never given the right to final review of a publication prior to its release.

South Korea’s macroeconomic response to the COVID-19 pandemic has been moderate compared with many other member countries of the Organization for Economic Cooperation and Development (OECD) in Asia and especially Europe and North America. This blog analyzes the drivers of South Korea’s economic rebound, the macroeconomic circumstances of their operation, and prospects for continued contributions to economic growth in the short to medium term.

Resolute and Competent Management of the Pandemic 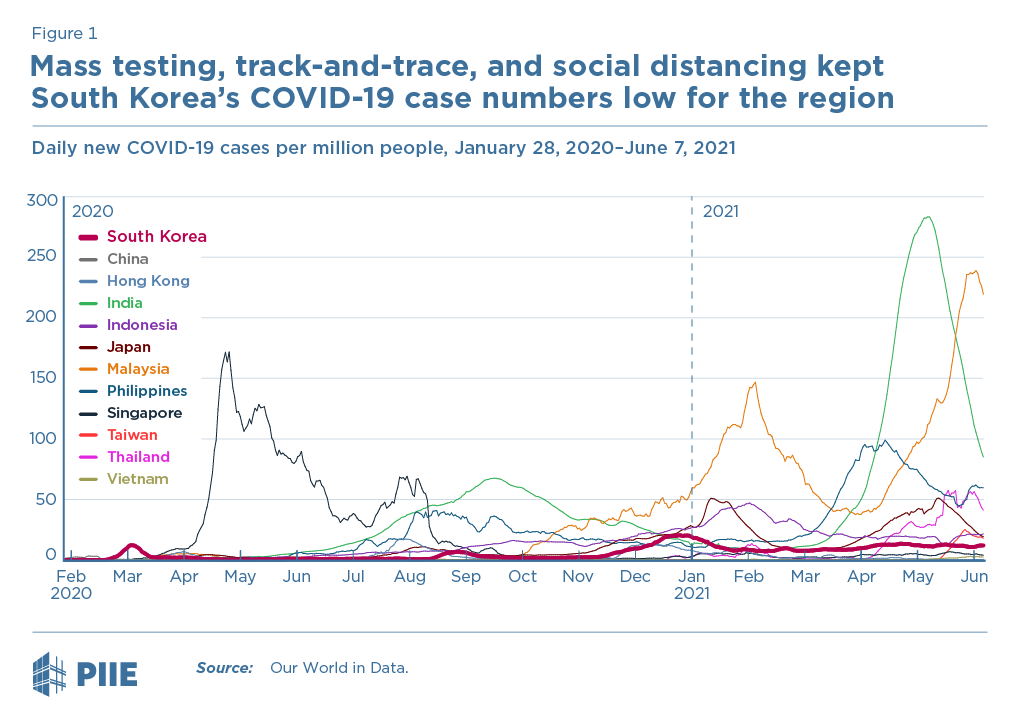 South Korea’s still relatively low level of vaccinations compared with other OECD countries (figure 2) suggests that the country will remain vulnerable to new pandemic waves until September 2021, by which time it hopes to have vaccinated 70 percent of the population. In June 2021, the number of new infections was higher than in the spring and early summer of 2020 (see again figure 1). Unlike the United States and Europe, South Korea is consequently not likely to lift social distancing rules in the coming months and hence will not enjoy a significant short-term boost to domestic demand from reopening domestic services, travel, and tourism subsectors in the second and third quarters of 2021. It might still see a rebound in the fourth quarter of the year, however. 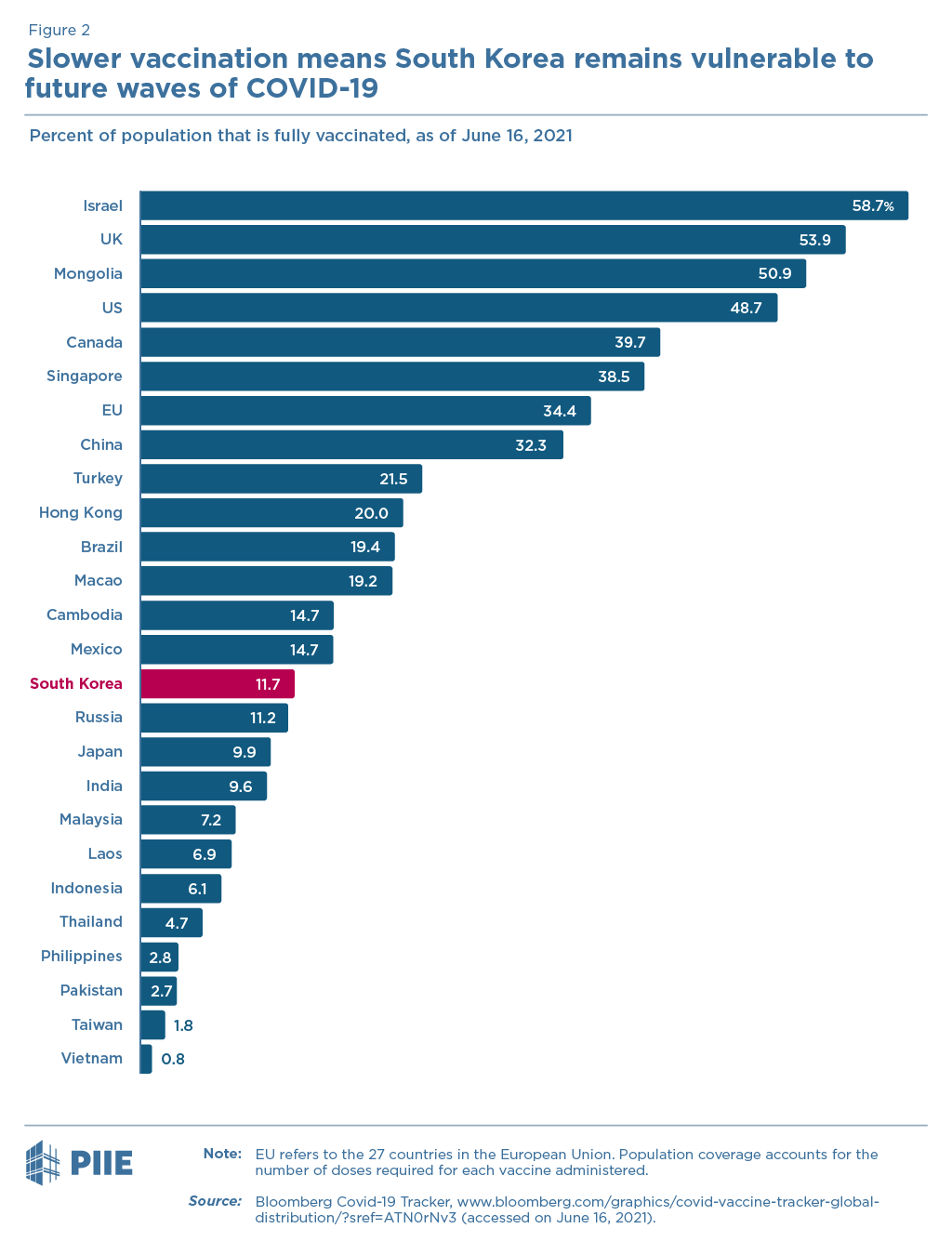 Notwithstanding the risks in the coming months associated with its late exit from mobility and social distancing restrictions, South Korea’s generally adept handling of the pandemic has ensured that the country has not suffered pandemic-related economic shocks of the magnitude seen in many other OECD countries. The scope of South Korea’s macroeconomic stimulus has consequently been considerably smaller than in most of its regional and Group of Twenty (G20) peers (figure 3). 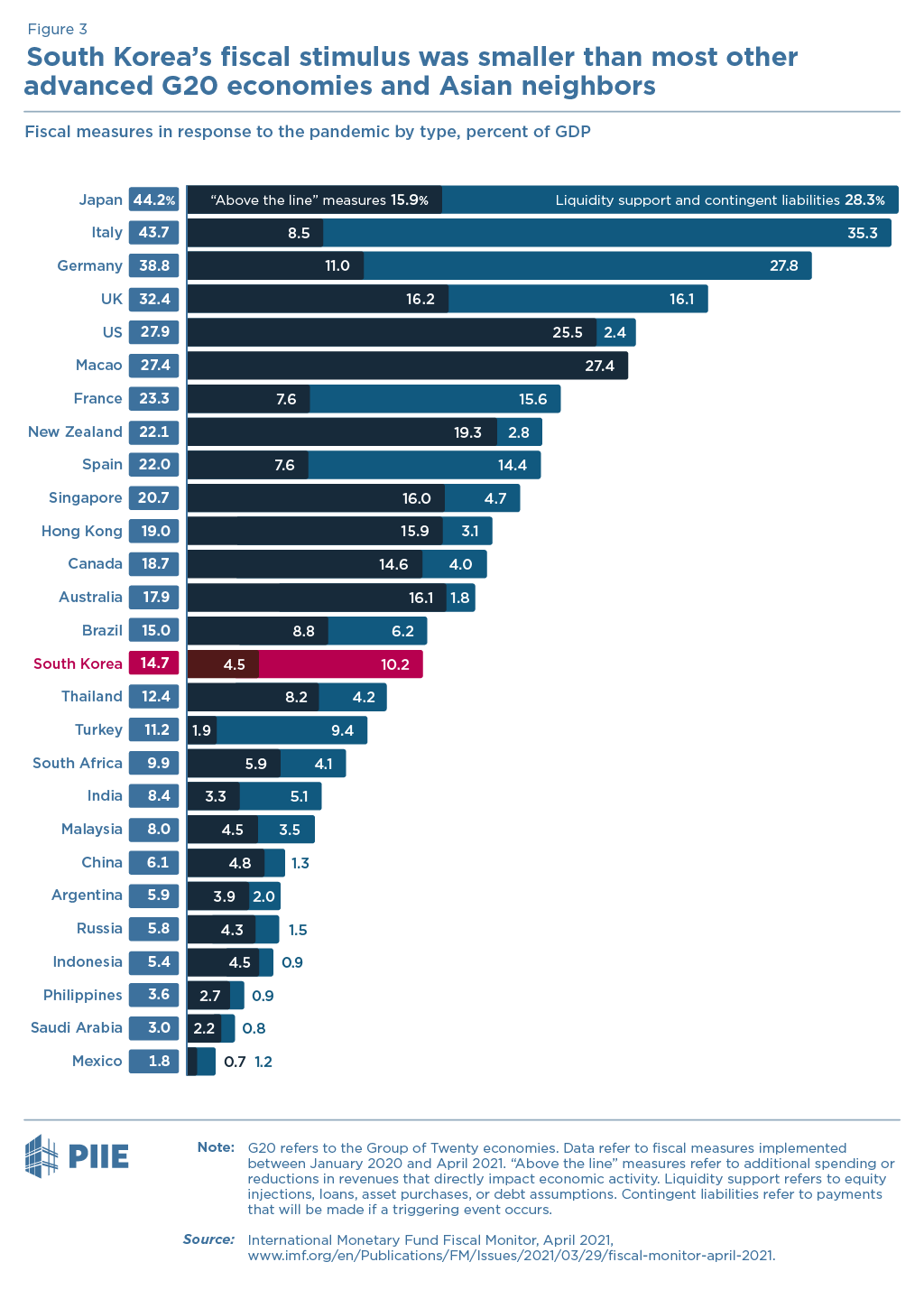 South Korea benefited from strong global demand for its electronic hardware, semiconductors, and cars in the second half of 2020, extensively relying on exports to rapidly return to growth. The contribution of goods exports to GDP cooled in the first quarter of 2021, however, when rebounding domestic consumption and gross capital formation supported growth (figure 4). 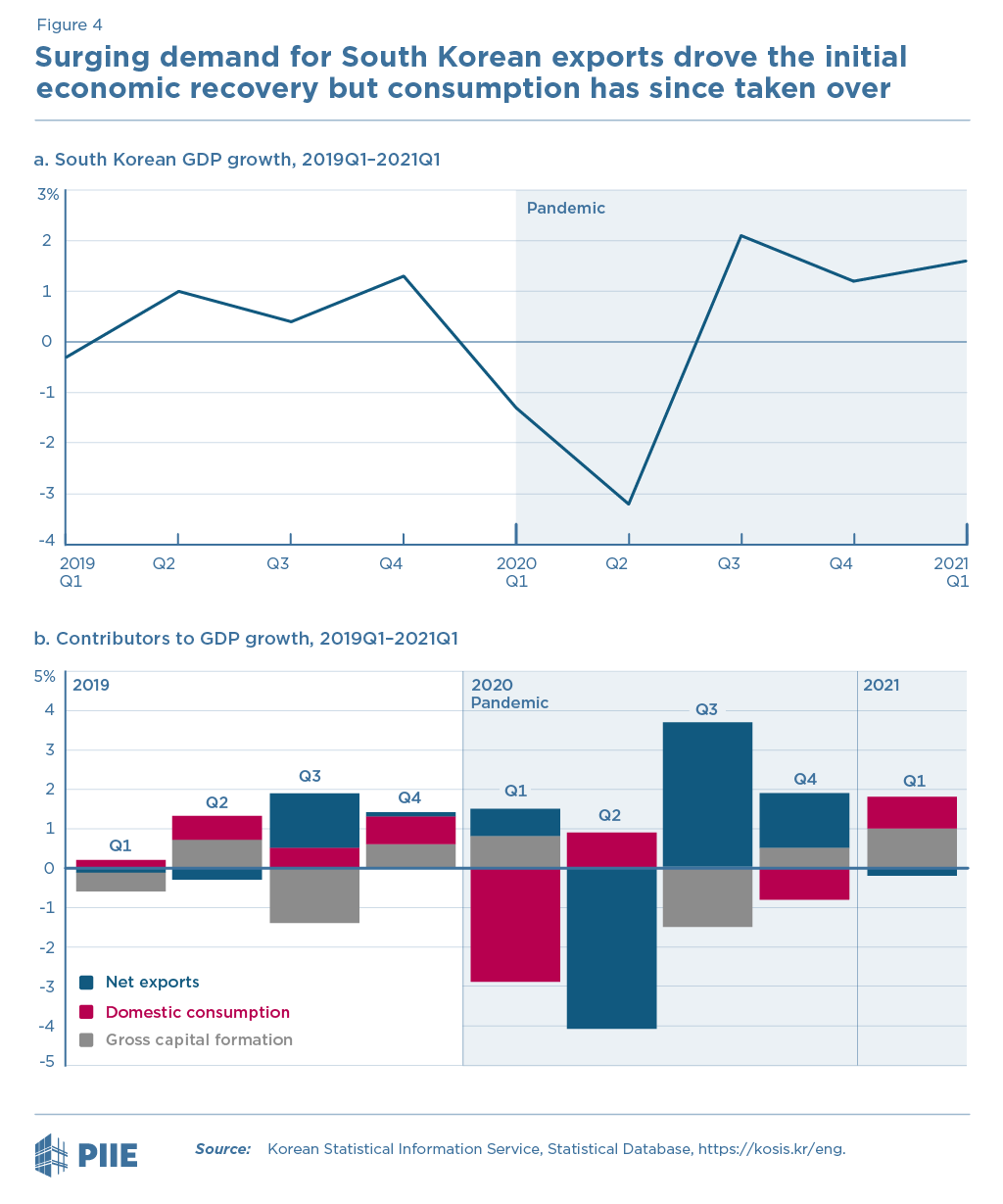 Strong external demand and social distancing restrictions dampening domestic consumption have seen South Korea’s current account balance rise significantly since the second half of 2020, to over 5 percent of GDP in the second quarter of 2021. This highlights the economic boost from external demand, despite a roughly 10 percent increase in the foreign exchange value of the won between May and December 2020 (figure 5). The strong rise in the South Korean current account balance during the pandemic, combined with a significant rise in South Korea’s net official foreign capital inflows[2] in 2020—estimated at US$45 billion in Gagnon and Sarsenbayev (2021)—has contributed to South Korea remaining on the US Treasury’s currency monitoring list. The Treasury has declined to label South Korea a currency manipulator, though one commentator did so (Gagnon 2021). Although the won strengthened in the second half of 2020, it did not do so enough to avoid an increase in the current account from an already high pre-pandemic level of about 4 percent of GDP, argues Gagnon (2021). Yet, exchange rates affect trade flows only with a lag, so the trade data for the first half of 2021 do not fully capture the appreciation of the won. 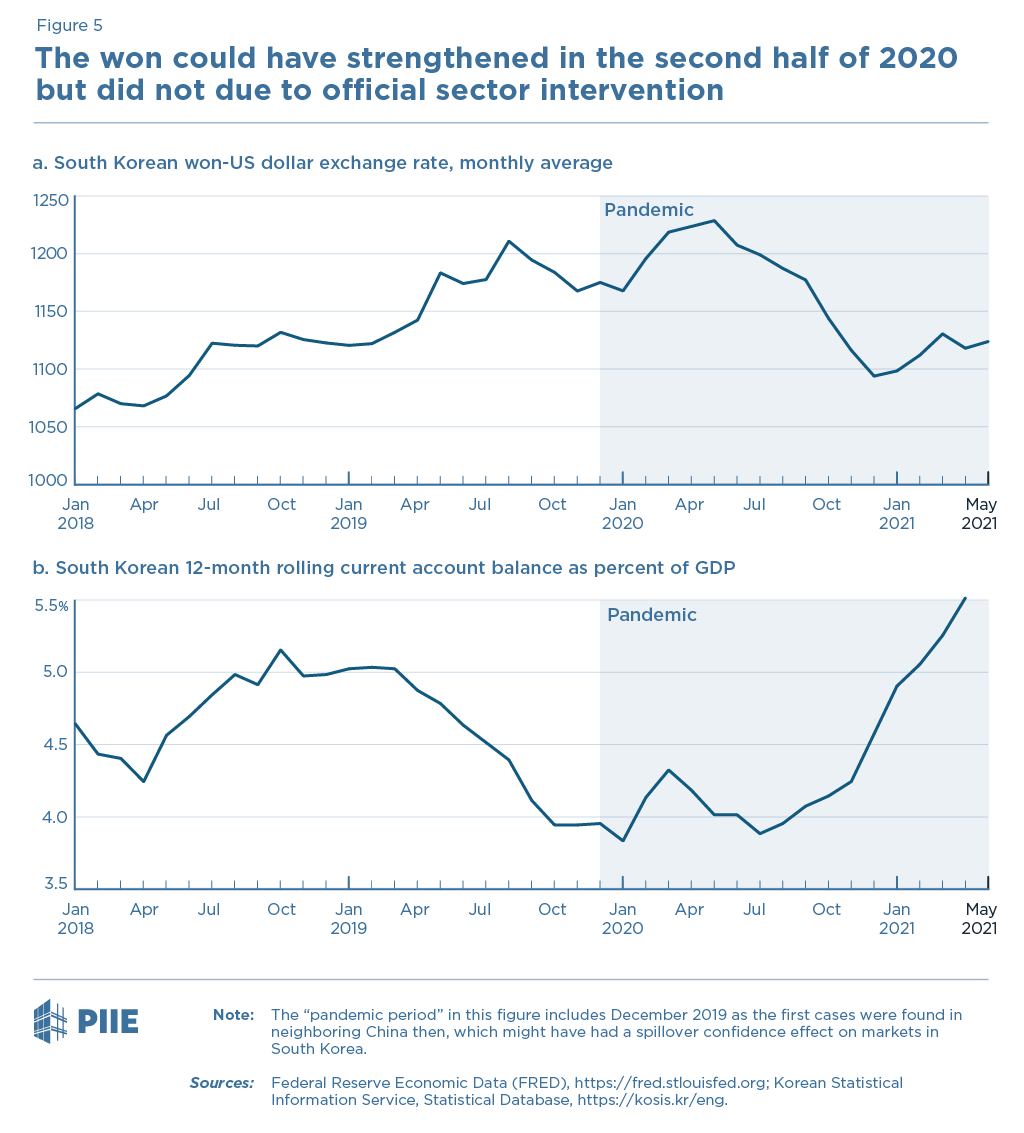 More than half of South Korea’s goods exports during the pandemic were capital goods in Harmonized System (HS) categories 84 (nuclear reactors, boilers, machinery and mechanical appliances; and parts thereof); 85 (electrical machinery and equipment and parts thereof); and 87 (vehicles other than railway or tramway rolling-stock and parts and accessories thereof), produced predominantly by chaebols (large industrial conglomerates). Most chaebols are either currency hedged to a certain degree via financial market instruments or, because of their large global presence, naturally hedged by their location of production. Their sensitivity to short-term movements in the exchange rate is therefore likely to be muted and their foreign pricing and derived export competitiveness less dependent on the exchange rate than it otherwise would be.

South Korea’s reliance on goods exports early in the pandemic may have benefited from intentionally generated exchange rate effects. But the larger forces are more likely to have been the temporary benefit from adjacency to China’s rebounding economy (in late 2020) and the social restriction–related stifling of growth in the domestic services sector.

Employment in South Korea has recovered strongly; by May 2021, it had risen to above pre-pandemic levels, albeit with some job redistribution toward older workers (figure 6). The increase suggests that consumption growth is likely to continue in 2021 and to contribute strongly to GDP growth going forward (see figure 4 for the first quarter of 2021). If South Korea can continue to prevent new infection waves, gradually scale back social mobility restrictions, and fully reopen its job-rich services sector, employment-driven gains in consumption should remain a potent driver of economic growth. 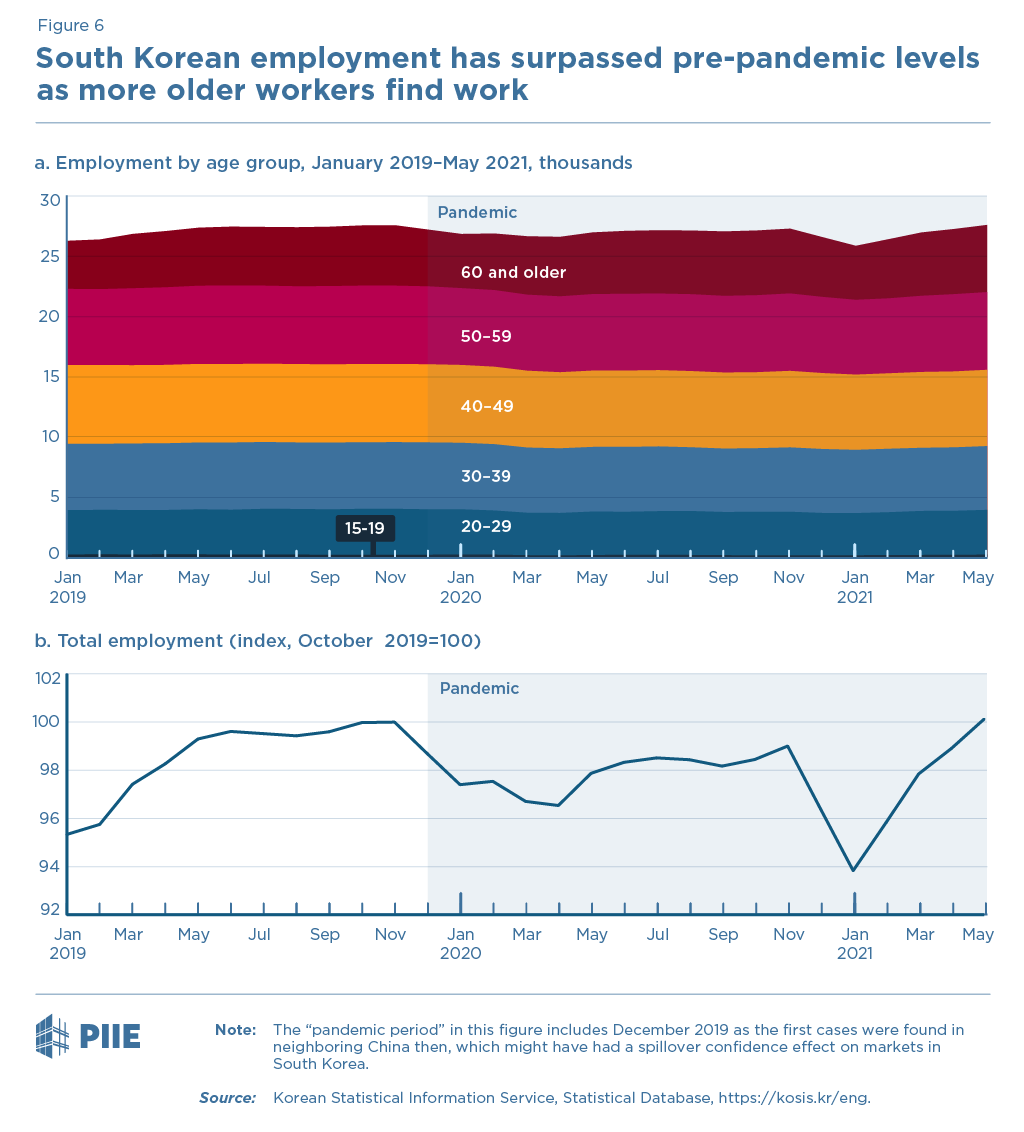 South Korea retains sizable potential domestic monetary policy stimulus capacity. During the pandemic, the central bank cut interest rates only modestly, by 75 basis points (to 0.50 percent). Households saw virtually no reduction in the interest rates they faced, causing only a modest acceleration in new household loans (figure 7). Were the pandemic to linger in South Korea, the central bank could stimulate domestic credit creation to the household sector—and with it domestic consumption—to boost growth. 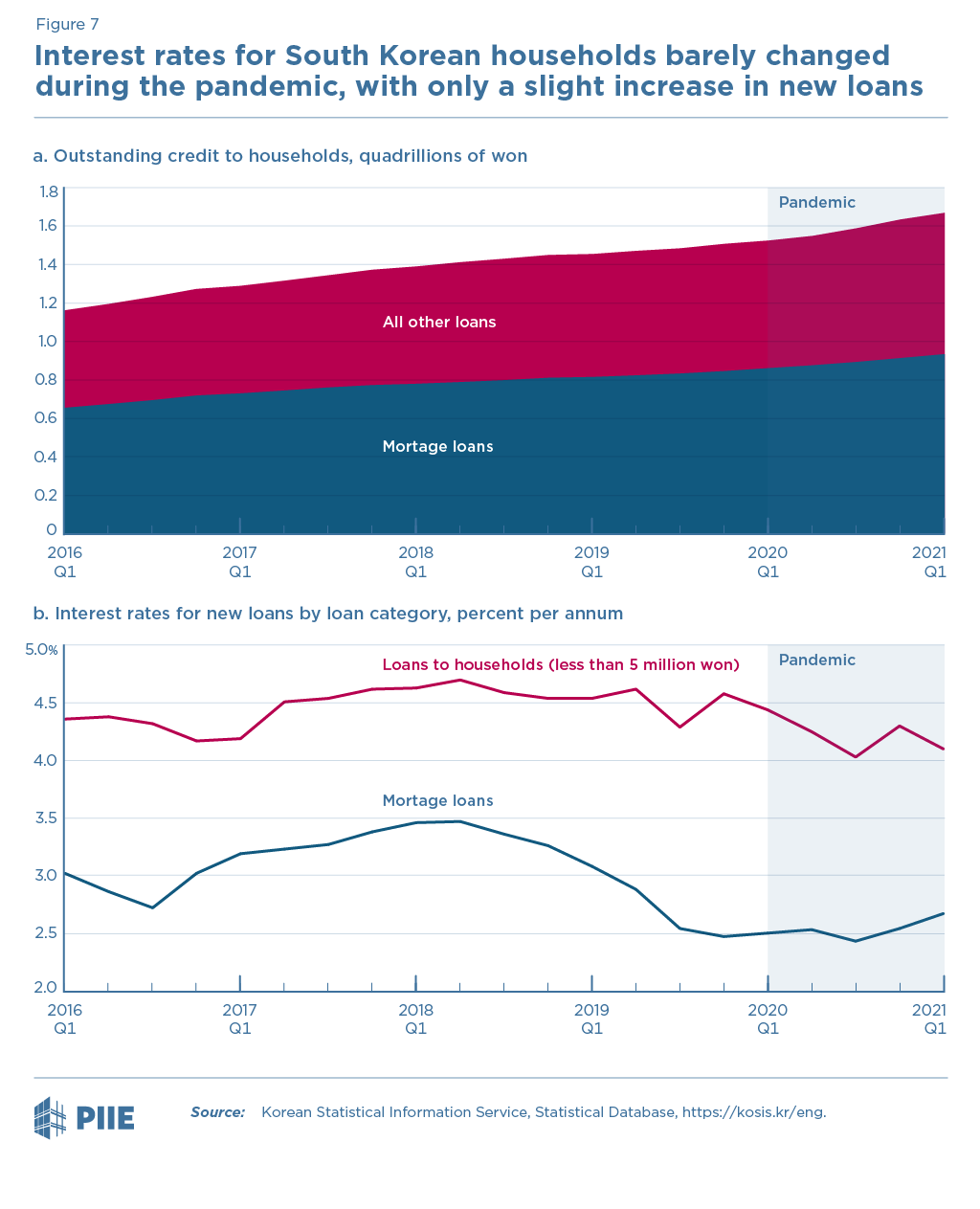 South Korea has managed the pandemic well. During the pandemic, it benefited from adjacency to China’s rebounding economy and continued strong global demand for South Korea’s electronics and automobile exports. The contribution of exports to growth rose during the pandemic, as the decline in the services sector caused by the temporary slowdown from social mobility restrictions weighed on domestic demand, and South Korea experienced no macroeconomically relevant impact of trade protectionism.

Employment has now returned to pre-pandemic levels, providing a strong foundation for continued growth in consumption, as witnessed in the first quarter of 2021. The relatively slow rate of vaccinations in South Korea—and Asia as a whole—combined with the spread of more virulent SARS-CoV-2 variants in Asia makes it likely that the lifting of social mobility restrictions in South Korea will be gradual, completed only by the end of 2021 at the earliest. Nonetheless, in the absence of new pandemic waves in South Korea (which the country has avoided to date), gradual easing of social mobility restrictions seems likely, providing ongoing support for job creation in domestic services, including the leisure, hospitality, restaurant, travel/tourism, and cultural events–driven subsectors. Household consumption growth will continue to contribute to GDP growth in 2021.

In sum, South Korea’s macroeconomic rebound from the pandemic appears on track, driven predominantly by domestic demand. COVID-19 will not have left a material imprint on the government’s fiscal position or scarred the labor market. South Korea’s eventual exit from the pandemic will allow it to focus on the long-term challenges posed by its demographic transition and geopolitical neighborhood.

2. This refers to South Korean government entities selling won-denominated assets to foreigners in return for foreign currency (US$)-denominated assets, in the process increasing the supply of won in the financial markets, putting downward pressure on its price.

An uneven global rebound will challenge emerging-market and developing economies