Despite some progress over recent decades in reducing the barriers women in the workforce face in job advancement and wage parity, discrimination in these areas persists. In fact, the gender gap in labor force participation between men and women in the United States has worsened as a result of the COVID-19 pandemic. The COVID plague has inflicted disproportionate damage to sectors employing more women, such as retail stores, restaurants, and the hotel and hospitality business. An increase in family caregiving responsibilities because of school closures has also fallen on working mothers' shoulders. Both factors have pulled women out of the labor force.

The United States is not alone in this trend, however. Several other advanced economies have experienced declines in labor force participation by women during the COVID era, including Canada, Japan, and South Korea (figure 1, panel a). The gender gap in September was around 0.8 percentage point higher in this quartet of economies than it was in January 2020.

What is striking, however, is that female labor participation, the share of women employed or actively looking for work, in four countries—Australia, Denmark, Norway, and the United Kingdom (figure 1, panel b)—has been resilient. The gender gap has closed by 0.5 percentage point in this quartet of advanced economies. The better performance in these countries is not an accident. Each of these economies has either implemented programs to help those sectors with high female employment or helped support day care and other child services during the crisis. 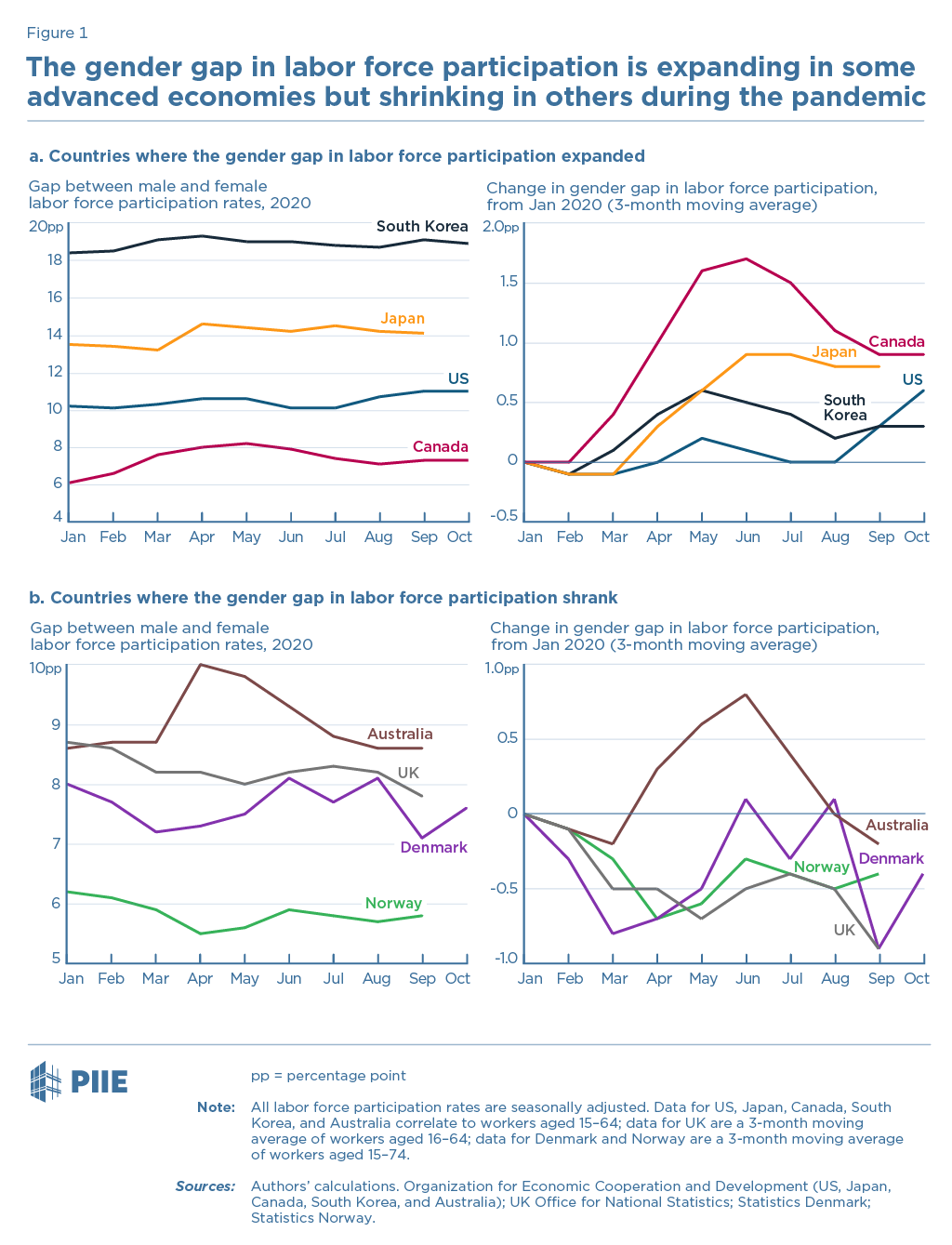 In Japan, a government campaign had been making progress in reversing the historically high discrimination women have faced in the workplace: Labor force participation by women grew from 68 percent in 2016 to 73 percent in 2019 (Hyland et al. 2020). But COVID has inflicted a major setback. While labor force participation by men barely budged (figure 2), one million women were pulled away from the labor market earlier this year, despite a crisis response policy that offered employers partial compensation for providing paid leave to employees unable to work because of childcare or school closures. 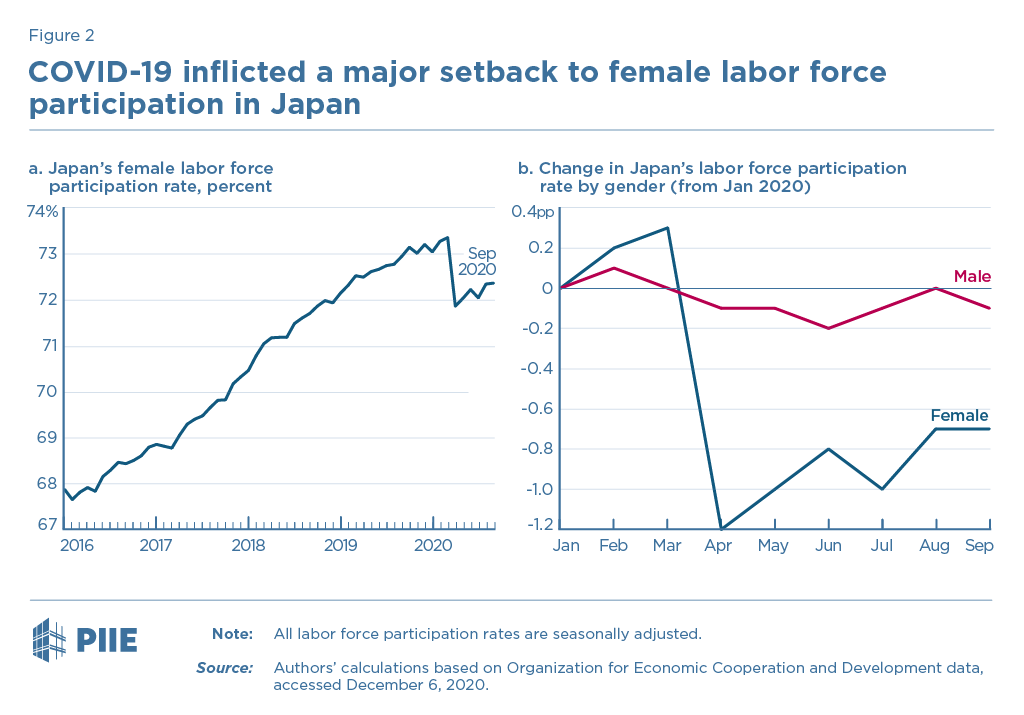 In Denmark, Norway, and the United Kingdom the labor force participation for men has declined more than that for women, thus narrowing the gender gap (figure 3). In contrast, the labor force participation for women in Australia has rebounded stronger than that for men, with the rate in September being 3 percentage points higher than at the lowest point in 2020 for women, but only 1.8 percentage points higher for men. 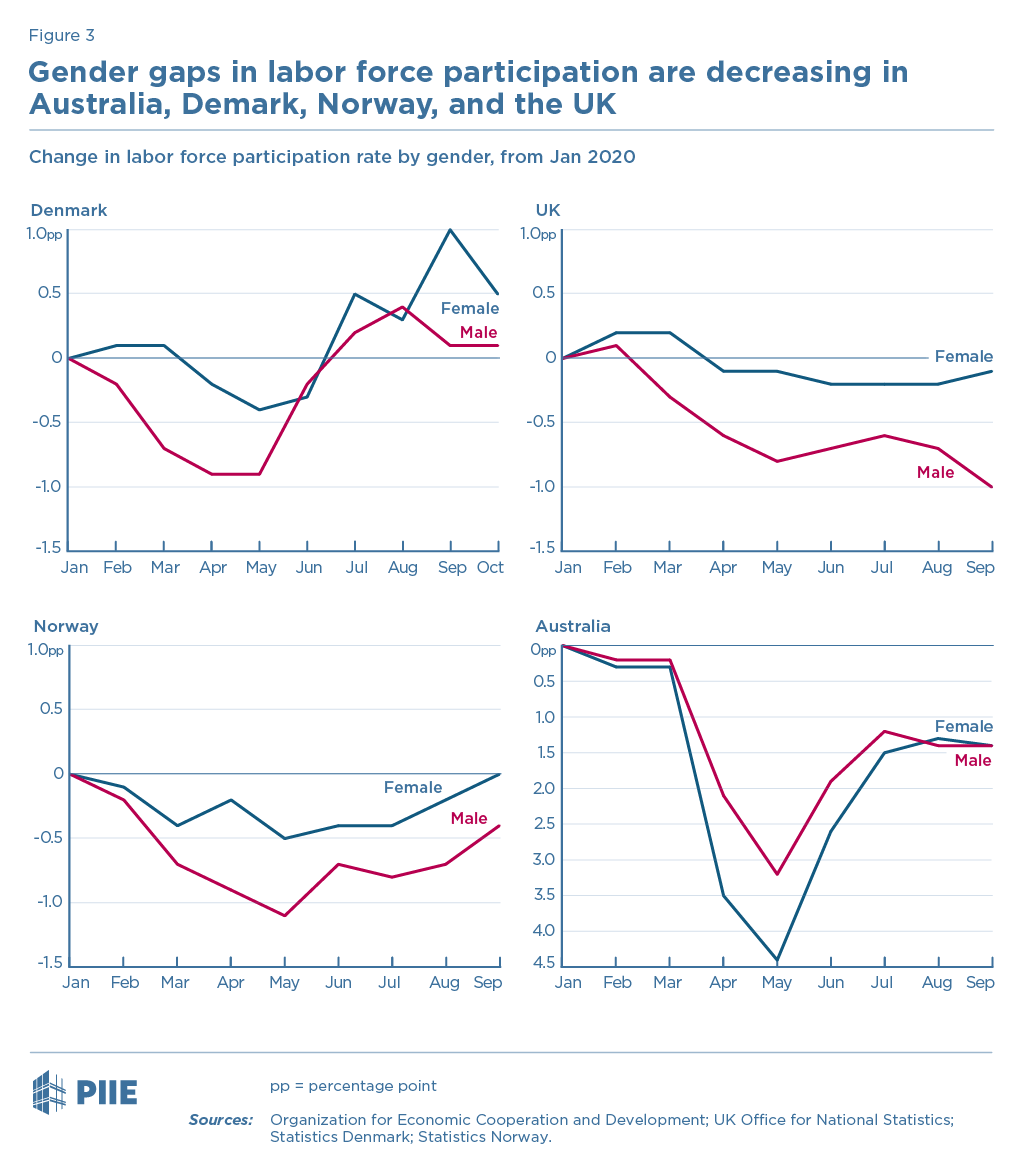 Why have these latter countries fared better in protecting the gains of women in the workforce? Two hypotheses offer an explanation.

First, these economies were more successful at protecting those sectors where women are overrepresented, especially retail trade, food and accommodation services, the arts and recreation fields, and social assistance. Second, these governments enacted programs supporting childcare that helped parents cope with school and daycare closures and therefore retain their jobs.

The United Kingdom, for example, offered a temporary reduction of the value-added tax (VAT) rate for crisis-affected businesses, such as the tourism and hospitality sectors. Businesses in the retail, hospitality, and leisure sectors are entitled to a one-off cash grant of up to £25,000 from their local government council. A local property tax exemption in the United Kingdom for eligible childcare centers from 2020 to 2021 may also have helped. Lastly, parents whose work hours have been reduced during the pandemic are eligible to offset childcare costs through tax credits.

In Norway, the VAT rate was cut down from 12 to 6 percent for passenger transport, accommodation, and entertainment. The Norwegian government also provides grant support to businesses in the retail, hospitality, and entertainment sectors. In Denmark, where the part-time employment rate for women is 55 percent compared to 35 percent for men, the government's wage support scheme, which covers up to 90 percent of part-time wages, is credited for helping women remain in the labor force.

One reason female labor force participation recovered quickly in Australia is the childcare subsidy introduced there in response to the crisis. The Australian government provided free childcare to around one million families from April 6 to July 12 (the program's cancellation has been criticized) and extended financial support to childcare facilities. Similarly, Norway doubled the paid days for taking care of small children (e.g. because of closed schools or daycare) from 10 days to 20 days. South Korea introduced an emergency family care subsidy for employees taking leave to attend to their children during COVID school and daycare closures for up to 10 days.

Lessons from the success of early crisis response measures to reduce the gender gap in labor force participation can serve to inform future COVID recovery programs. Previous research suggests that it takes significant time to reintegrate women in the labor force once out of work—all the more reason why governments should pursue policies that ensure job retention during the crisis.