The authors thank Monica de Bolle, Marcus Noland, Maurice Obstfeld, Adam S. Posen, Sherman Robinson, Steve Weisman, and David Wilcox for helpful comments. The findings, interpretations, and conclusions expressed in this essay are entirely those of the authors. They do not necessarily represent the views of the World Bank and its affiliated organizations, or those of the Executive Directors of the World Bank or the governments they represent.

In the United States, women have made halting but mostly steady progress in the labor market over the last three decades, increasing their participation in the workforce from 55.7 percent in 1987 to 60.3 percent in April 2020. But the sudden impact of the COVID-19 pandemic dealt a serious setback to those gains, driving 2.5 million women from their jobs in what Vice President Kamala Harris called a “national emergency” for women. By January 2021, the US female labor force participation rate had fallen below 56 percent. The last time when the rate was that low was in April 1987, nearly 35 years ago.

Of course, many men also lost their jobs because of the pandemic. But the pandemic’s economic effects hit women even harder. The trend of women losing jobs at a higher rate than men contrasts with the previous four US recessions, in which the gender gap shrank by 1.4 percentage points on average as the economic downturns primarily reduced the employment opportunities of men (see figure). 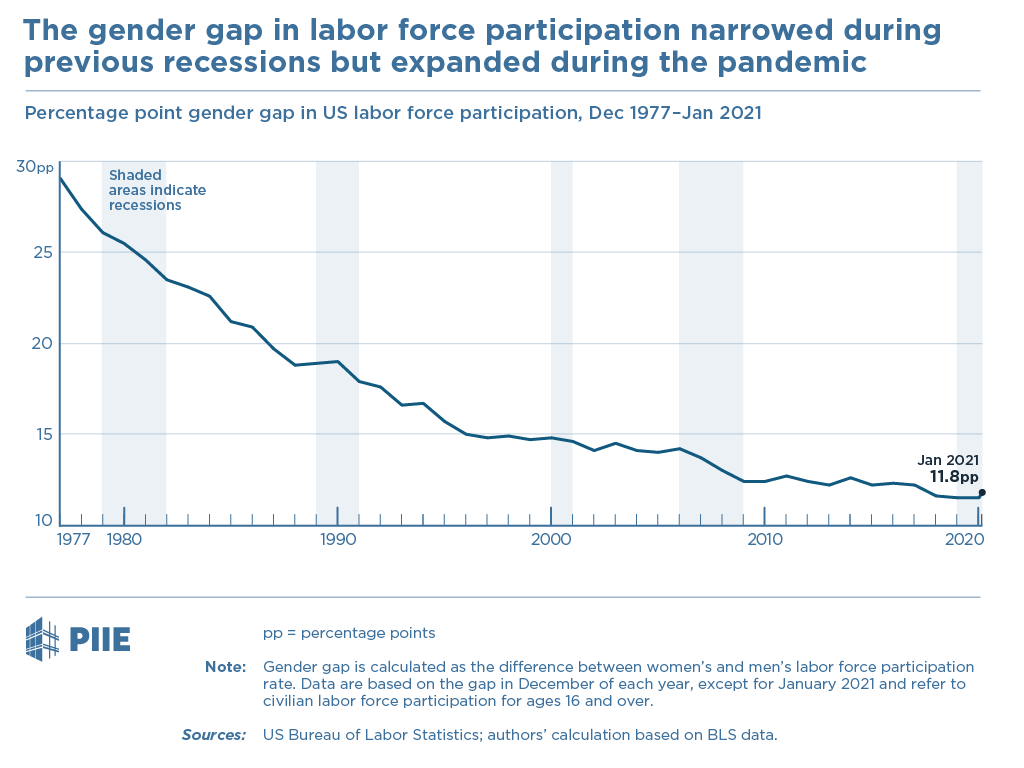 Why did the pandemic hit women harder than men? A variety of factors have been at work. The pandemic caused layoffs in service sectors of the economy, such as restaurants, food production, and retail, in which women are more heavily employed. In addition, the shutdown of schools and day care facilities in the United States meant that women, more than men, sacrificed their jobs in order to stay at home to take care of children. Women also were more likely to hold part-time or contract jobs that lack benefits, reducing their incentive to stay employed in the face of other demands on their attention.

Previous research suggests that it takes significant time to reintegrate women into the labor force once they are out of work—all the more reason why governments should pursue policies that ensure job retention during the crisis. One problem that should not be overlooked is that many women with young children come from working class families where wages have not kept up with living costs and they are forced to take part-time or even full-time jobs to help their families make ends meet.

What can be done to overcome these disadvantages and help women increase their participation in the paid work force? The pandemic has vividly demonstrated the need in the United States for more help for childcare, more protections for temporary and fixed-term contracts, and more benefits that provide incentives to stay at work. A number of specific policy measures seem particularly called for to help mitigate the gender gap. One step might be to ensure that more jobs held by women come with retirement and health benefits, and with protections against dismissals. Another step would be to increase paid parental leave so that in times of economic hardship fathers, too, can take care of children over extended periods. Providing start-up capital for women who wish to establish their own businesses would also make a significant difference.

Emerging Evidence on the Pandemic’s Impact

Evidence is emerging on why the pandemic has affected the gender gap in labor force participation in advanced economies. Using US employment data, researchers have identified two main channels through which COVID-19 has expanded the gender gap in employment. The first is the occupation channel. Unlike in past recessions that concentrated joblessness in sectors largely employing men, the COVID-19 plague has inflicted disproportionate damage on sectors that employ women intensively, such as retail stores, restaurants, and the hotel and hospitality business. The second channel of reduced labor supply by women is the childcare channel, whereby the extra caregiving responsibilities brought about by school and childcare closures fell disproportionately on working mothers’ shoulders.

The United States is not alone in this trend. Several other advanced economies have experienced declines in labor force participation by women during the COVID-19 era, including Canada, Italy, and Japan. These declines were greater than in male participation. The gender gap in December 2020 was around 0.6 percentage point higher in this quartet of advanced economies than it was in January 2020.

For example, under Prime Minister Abe Shinzo’s third arrow of economic policies the government in Japan had been making progress since 2012 in reversing the historically high barriers women have faced in the workplace. Government policies to encourage women’s labor supply, such as expanded support for daycare, converged with structural factors, including declining marriage and birth rates due in part to the high costs of raising a family, to push Japan’s female labor force participation rate ahead of the United States’ in 2015. But COVID-19 inflicted a major setback to this progression in early 2020. Despite government-supported paid leaves to parents during school closures, one million women left the labor market earlier this year while labor force participation by men barely budged.

What is striking, however, is that female labor force participation has been more resilient in other advanced economies—the United Kingdom among the Group of Seven (G7), and Australia, Denmark, and the Netherlands.[1] The gender gap has closed by 0.9 percentage point in this group of advanced economies. The better performance in these countries may not be an accident. Each of these economies has either implemented programs to help those sectors with high female employment or supported childcare services during the crisis.

In the United Kingdom, labor force participation for men declined more than for women during COVID-19, thus narrowing the gender gap. This decline owed primarily to the collapse of operations in tradable sectors like manufacturing—where more men work. At the same time, the UK government enacted several measures that shielded sectors employing women intensively. The government offered a temporary reduction of the value-added tax (VAT) rate for crisis-affected businesses, such as those in the tourism and hospitality sectors, where women are disproportionately represented. Businesses in the retail, hospitality, and leisure sectors are entitled to a one-off cash grant of up to £25,000 from their local government council. A local property tax exemption in the United Kingdom for eligible childcare centers from 2020 to 2021 helped primary childcare givers withstand the initial shock. Lastly, parents whose work hours have been reduced during the pandemic were eligible to offset childcare costs through tax credits. As women primarily hold part-time jobs, this childcare support benefited them relatively more.

Our research shows that the policy lever that seems to have the most explanatory power in predicting the resilience in women’s labor force participation across advanced economies is equality of social security benefits and hiring and firing rules for workers on temporary or fixed-term contracts. Strengthening these benefits and regulation is therefore an important way to support women’s engagement in the labor market in future crises. This policy is also consistent with providing gig workers—an increasing presence in the labor market—with better social security packages paid by the companies that employ them.

Research on the Changing Gender Gap in Advanced Economies

Preliminary analysis of the effect of the COVID -19 pandemic on the employment of women in advanced economies has begun to emerge. In Spain, women were more likely than men to lose their jobs; they also document a large increase in childcare and housework responsibilities: children were at home, forcing their mothers to be at home too. For the United Kingdom, studies examined the increase in home childcare caused by the pandemic and noted that women were doing a greater share of this home-based childcare. A similar finding is presented by researchers in Australia, who study the impacts of COVID-19 on time spent on paid and unpaid labor in Australia. The increased time spent on unpaid work was greater for mothers.

In a cross-country analysis of the labor market effect of COVID-19, researchers use real-time survey data to show that the immediate impacts vary across countries. They find that employees were most insulated from the crisis in Germany, which already had a short-time work scheme in place, allowing firms to reduce employees’ hours rather than laying them off. Germany also has a tradition of prioritizing the reduction of hours over laying off people in recessions. The authors also find that women and less educated workers were the ones more likely to lose jobs. The gendered impacts, beyond those related directly to the labor market, have also been examined. Research from Japan documents that school closures were associated with a negative impact on the mental health of mothers of school-age children, but not that of fathers.

Women’s representation among part-time workers, along with the extent of social security benefits in place for such workers, seems to account for the primary differences between countries where the gender gap widened and where it shrank. Early evidence from Japan, for example, shows that female workers fare worse than men largely because the share of part-time, temporary, and contract workers is larger for women. These part-time and lower-paying jobs were more likely to be eliminated during the downturn.

By contrast, the availability of childcare appears to be a lesser factor. Women disproportionately work in lower-paying jobs that oﬀer more family amenities, such as jobs in the public sector and in more “family-friendly” ﬁrms. We look at the relationship between the evolving gender gap during the COVID-19 pandemic and government expenditure on childcare, measured as a percent of gross domestic product. There is no statistically significant effect. Women seem to lose their jobs during COVID-19 for reasons other than the lack of childcare.

The main policy lever in affecting the resilience in women’s labor force participation is equality of social security benefits and hiring and firing rules for workers on temporary or fixed-term contracts. Strengthening these benefits is therefore one way to support women’s engagement in the labor market in future crises. The policy lever relates to the occupation channel, as the COVID-19 plague has inflicted disproportionate damage on sectors that employ women part-time.

Policies that relate to the second channel of reduced labor supply by women due to the extra caregiving responsibilities brought about by school and childcare closures—such as increased government expenditure on childcare support—do not show a statistically significant effect on mitigating the gender gap. But they are still worthwhile to pursue because they have a beneficial long-term effect on labor force participation by women in advanced economies.

1. France and Germany do not report labor force participation statistics on a quarterly basis. 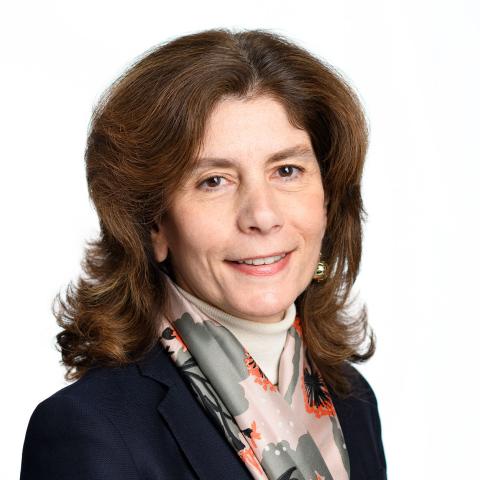