President Donald Trump's executive proclamations banning the entry of newly arriving green card holders and temporary workers on H-1B, H-2B, J, and L visas to the United States are estimated to have affected one million workers in a normal economy, according to a careful analysis of US immigration statistics from recent years. Visa issuance data from early 2020, however, suggest that the threat of the COVID-19 pandemic had already reduced immigration ahead of any of the administrative steps taken by the Trump administration. By May 2020, the virus—ahead of Trump's bans—had already discouraged more than 95 percent of the workers who otherwise would be entering the United States this year.

Trump’s order on June 22 banning the entry of new temporary workers followed an earlier proclamation on April 27, which bans the entry of most new lawful permanent residents (prospective green card holders) to the United States, and hence continues the administration’s efforts—through executive powers and without congressional consent—to greatly reduce the level of legal immigration to the United States. If reelected, Trump will almost certainly continue these actions, which he justifies as protection for the US labor market during the pandemic. The president’s most recent executive action that allows US Customs and Immigration Enforcement (ICE) to ban potentially thousands of foreign students from continuing their studies in US universities that will be teaching entirely online in the fall is yet another example of his aggressive redirecting of US immigration policy in the run-up to the 2020 elections.

Determining the effects of the pandemic, the economic shock, and the visa actions is not straightforward. The ban is on entry of new temporary workers to the United States on H-1B, H-2B, J, and L visas, not the issuance of the visas, an important distinction, especially in the H-1B visa category, because the vast majority of H-1B visa holders in the United States do not enter the country on this visa. Most are already residing in the United States on a visa from another category or on their first three-year H-1B visa and adjust their status into H-1B, in the latter case to “continue employment” on a second three-year H-1B visa. Trump’s new entry ban would not affect these visa holders. Figure 1 shows that only 14 percent of all new H-1B visa holders would have been affected had Trump’s latest action  been in place during the fiscal years from 2016 to 2019. 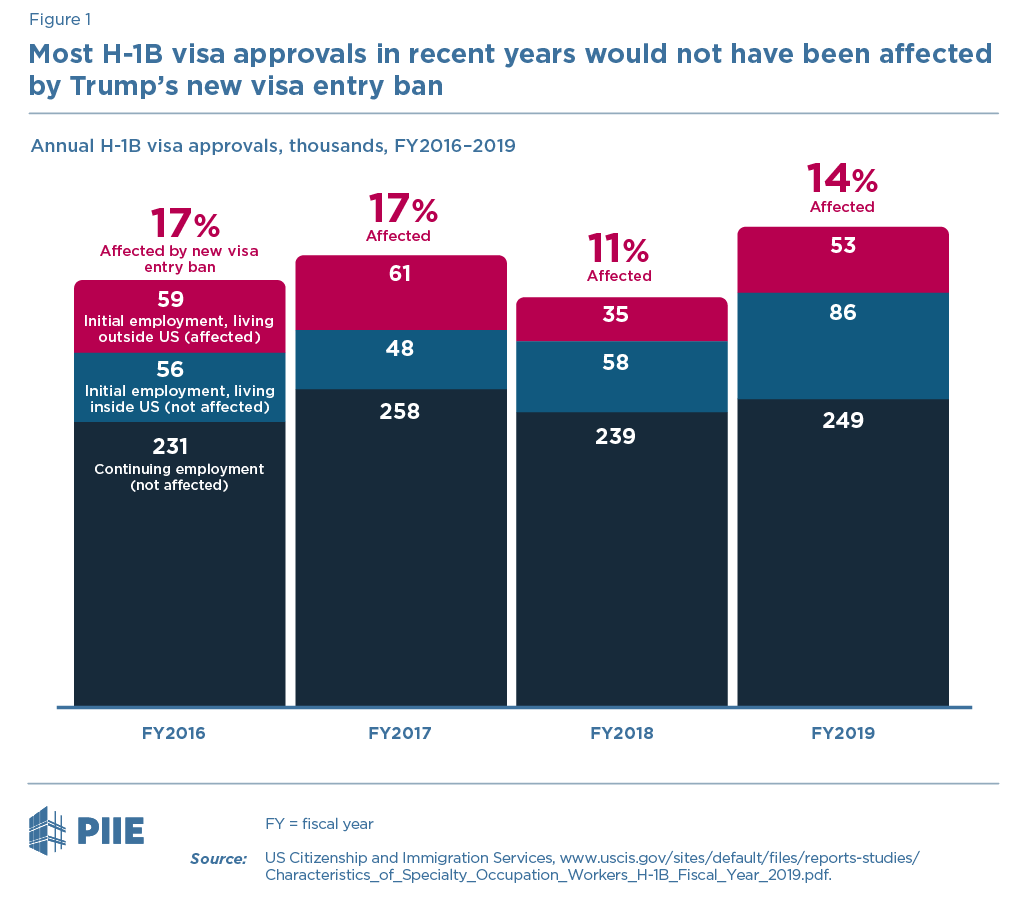 In addition, the ban covers only parts of the exchange visitor (J) visa category, namely aliens participating in an internship, trainee, teacher, camp counselor, au pair, or summer work travel program, but not J visa holders coming to the United States as physicians, professors, resident scholars, short-term scholars, specialists, students, or government/international visitors. Data for fiscal years 2016 to 2018 available on the Department of State website suggest that Trump’s ban on J-1 exchange visitors covers only approximately 57 to 58 percent of the total visas in the J-1 category.

The L-1 intracompany transferee visa requires that the recipient reside outside the United States at the time of issuance. As a result, Trump’s ban will affect all new L-1 visa holders. Trump’s proclamation also bans the entry of all spouses and children of banned temporary work visa entrants, who would otherwise be able to come to the United States on J-2, L-2, and H-4 visas.[2] The table shows the projected effect of this ban on the J and L visa categories from  fiscal years 2015 to 2019.

Based on the available data (figure 1 and table), back-of-the-envelope estimates of the effect of Trump’s ban on entry of temporary work visa holders, had it been in effect during the most recent fiscal year 2019, are the following: about 50,000 H-1B, 100,000 H-2B, 200,000 J-1, 20,000 J-2, and 155,000 L-1 and L-2 visa holders, or approximately 525,000 new temporary visa holders would be denied entry into the United States. To this can be added approximately 500,000 green card holders in the “new arrivals” category, who would have been blocked from entering the United States had Trump’s entry ban been in place for a typical year, as these “new arrivals” rely on their new lawful permanent residency status to enter the United States. So Trump has blocked potentially up to 1 million lawful immigrants and temporary workers and family members from entering the United States—quite a significant number for a president vowing to reduce legal immigration to the United States.

Yet, because of the raging pandemic, many would-be visa holders will have in the end either refrained from coming to the United States due to the pandemic or seen their prospective employers rescind the employment opportunities. Monthly data shown in figure 2 suggest that issuance of new green cards and temporary work visas already fell dramatically before Trump’s bans went into effect. As such it is clear that the number of new arrivals that Trump’s entry bans will prevent is likely to be lower than the above estimates based on FY2019 data. 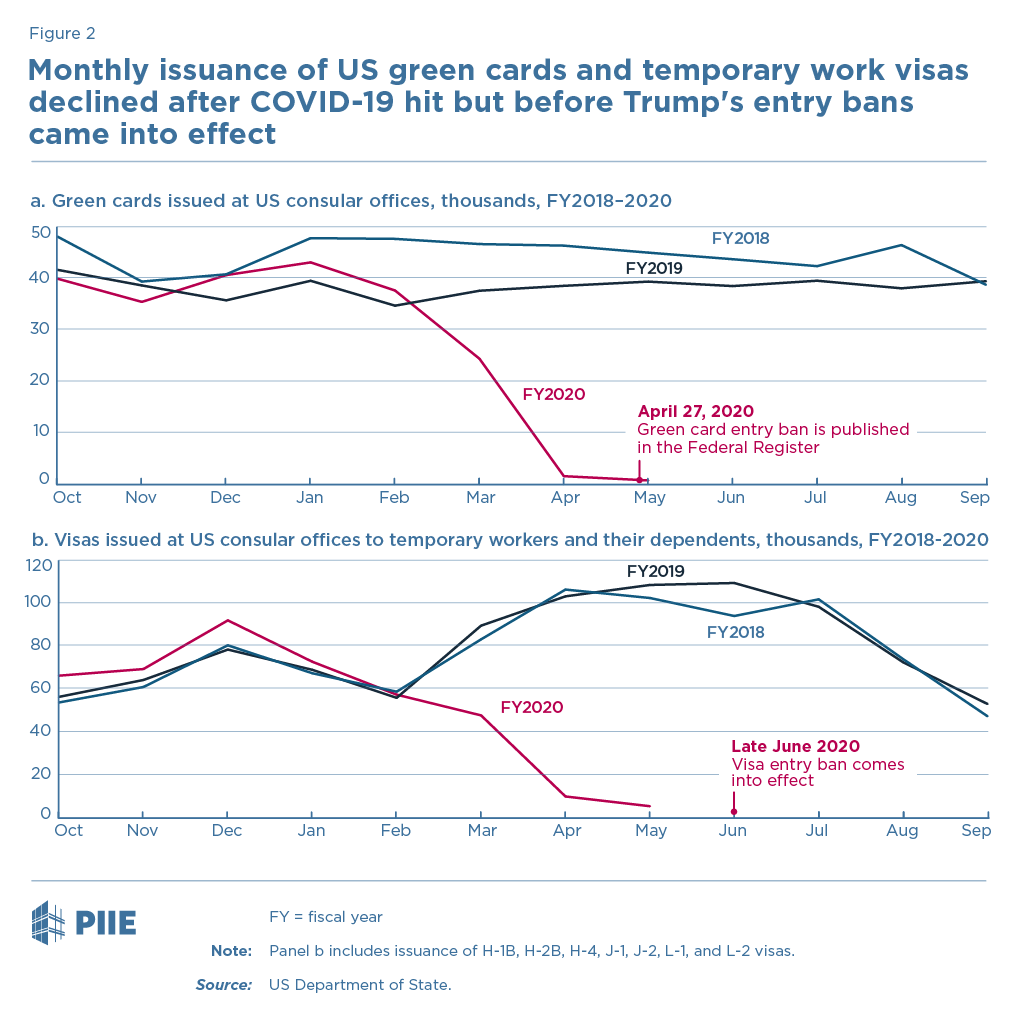 Figure 2 shows the number of new green cards issued to aliens outside the United States fell precipitously before Trump’s ban was published in the Federal Register on April 27. As such, the number for April 2020 showed a drop of more than 95 percent, relative to the roughly 40,000 green cards issued monthly in prior fiscal years. The majority of this monthly decline, which began in March 2020, probably occurred before April 27. This suggests that the pandemic much more than Trump’s entry ban caused the dramatic decline in the issuance of new green cards. Similarly, as shown in figure 2, the number of new temporary work visas affected by Trump’s entry ban was already down about 95 percent by May—before the ban came into effect toward the end of June—relative to issuance in prior fiscal years.

Ironically, given that the USCIS is funded largely through the fees paid by foreign visa applicants, this decline in the number of visas has led to an acute budget crisis at the agency, with a large number of employees to be furloughed as soon as August. Only a congressional appropriation of funds for the USCIS likely can avoid such a scenario, while offering Congress a political opportunity to weigh in on Trump’s recent immigration decisions.

In sum, for green card holders and temporary workers, Trump’s catastrophic handling of the COVID-19 pandemic, more than his entry bans, has already depressed their migration into the United States, though the bans will keep numbers extremely low until they are lifted.

2. H-4 visas are available for dependents of H-1B visa holders and should hence be expected to fluctuate roughly in line with the trend in the H-1B category. As noted in figure 1, the actual share of H-1B issuance affected by the visa entry ban is likely small. At the same time, annual H-4 visa issuance has been roughly stable at around 80 percent of annual H-1B visa issuance since 2014. But if H-4 dependents outside the United States disproportionally are coming to the United States from India to be reunited with their Indian spouses/parents who have adjusted status while already in the United States, the number of H-4 recipients affected by the visa entry ban might be higher than the number in figure 1 suggests. Given these uncertainties, and my desire to remain conservative in estimating the likely number of people affected, no separate estimate for the number of H-4 visas affected has been provided.