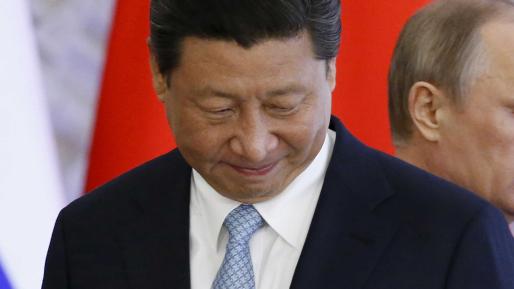 The protracted war in Ukraine has plainly caught China off guard and led to some confusion and mixed reports about the extent to which President Xi Jinping's regime supports Moscow's offensive. China continues to withhold explicit criticism of the Russian invasion and may still be working to formulate a coherent response. But beyond the rhetoric out of Beijing, the evidence suggests China is not acting to undermine the economic and financial sanctions on Russia and indeed has moved to support the drive to isolate Russia economically. We believe that this is the result of a cost-benefit calculation by President Xi, who appears to be far more rational than President Putin.

Consider the following: From the outset of Russia's invasion of Ukraine two major Chinese state-controlled banks have reportedly refused to provide US dollar-denominated letters of credit to finance imports from Russia. The Asian Infrastructure Investment Bank, in which China is the largest shareholder, announced a suspension of any new lending to Russia. The New Development Bank (the so-called BRICS Bank), which is headquartered in Shanghai, made a similar announcement.

Multiple Chinese private companies have also suspended sales to Russia or are closing operations there. For example, China's largest smartphone makers, which account for over 60 percent of the Russian smartphone market, including Huawei, Oppo, and Xiaomi, have drastically cut their exports, basically following the lead of Apple and Samsung. Geely, the owner of Volvo, and Lenovo, the Chinese computer maker, have reportedly suspended exports, while TikTok, which is owned by ByteDance, has suspended service in Russia. Fuyao Glass Industry Group, made well-known by the Oscar-winning 2019 documentary "American Factory," also shifted part of its production in Russia back to China.

Of course, tracking the full extent of this economic disengagement can be difficult, since Chinese firms are usually reluctant to make public statements. A Russian official responsible for maintaining airplane safety disclosed that China has refused to provide spare parts to Russia's commercial airline fleet (Boeing and Airbus had already announced a suspension of parts sales to Russia); the official has since been fired for his public statements about China. These parts almost certainly would have come from local inventories of China's major state-owned airlines. Moreover, some noncompliant Chinese actions might be successfully concealed. But the actions noted above indicate that at least some Chinese companies and leaders are risk averse and that China may be unlikely to provide military assistance to Russia, as some news accounts indicate, if only because the United States is likely to respond with a round of tough sanctions on China itself.

To be sure, China's global geopolitical objectives may in part align with Russia's. Moscow and Beijing share the view that the United States is weakened economically and that its behavior poses a security threat. But China's economic interests are different from its security concerns. China is deeply integrated into the global economy. Its share of global trade has increased significantly during the global pandemic as has its share of global direct investment inflows. We estimate that China's share in global trade at the end of 2021 was about 17 percent, and its share in global direct investment inflows at the end of the third quarter in 2021 was 19 percent. Its total trade flows, which exceeded $6 trillion last year, dwarf those of Russia.

China's firms and China's leadership are acutely aware that major efforts to support Russia that violate existing sanctions could bring down similar sanctions on them, especially if such support were to include military assistance. Russia is vulnerable to such sanctions; China would be even more exposed. Given the Chinese government has recently set the GDP growth target for 2022 at around 5.5 percent, higher than what most economists anticipated, having a significant portion of the Chinese economy subjected to Western sanctions is a risk that President Xi, who is seeking a tradition-breaking third term in office this year, is not likely to take.