Can Greece Make a Deal with Europe? Part 1: Why and When a Deal Must Be Struck

The new Greek coalition government led by Syriza seeks a "new arrangement" with its international creditors in the euro area. The signals from Prime Minister Alexis Tsipras's government have not helped his case. For example, after declaring that Greece would not deal with the Troika (consisting of the European Commission, the European Central Bank [ECB], and the International Monetary Fund [IMF]), Finance Minister Yanis Varoufakis reversed himself. Tsipras and Varoufakis have the obviously difficult challenge of trying to appease Syriza's voter base while compromising with the Troika's demands that Greece live up to its agreements and avoid a new economic disaster.

Is a deal possible? What might one include? Is there a deadline by which it must be struck?

Why a Deal Must Be Reached

Greece seems to be operating under the assumption that it has leverage because of the old cliché that if you owe the bank €1,000 it is your problem, but if you owe it €1 trillion, it is the bank's problem. What Greece is ignoring, however, is that a bank collapse resulting from Greece defaulting would affect not only the bank, but also the debtor. Would someone default on a bank loan, for example, if everyone living on his street and all the parents of his children's classmates worked at the bank, and that his own work colleagues were all shareholders in it? This is Greece's actual situation with its long-term political and economic partners and geographic neighbors in the euro area.

Athens's leverage is limited for several reasons. The euro area has lent almost €240 billion to Greece since 2010, a sizeable sum, but only 2.5 percent of euro area GDP, or just 4 months of asset purchases under the new ECB quantitative easing (QE) program. Greece could cause pain by seeking to unilaterally withdraw from the euro area, something the euro area would like to avoid. But burning down the euro area house to get its way in the belief that Greece's condition can't get worse is faulty logic. Greece has been through a Great Depression and lost a quarter of its output, but things can easily get worse in Greece, which has a per capita GDP that is triple that of its neighbor Bulgaria,1 despite Bulgaria scoring better in the rankings of institutional capacity (see figure 1). 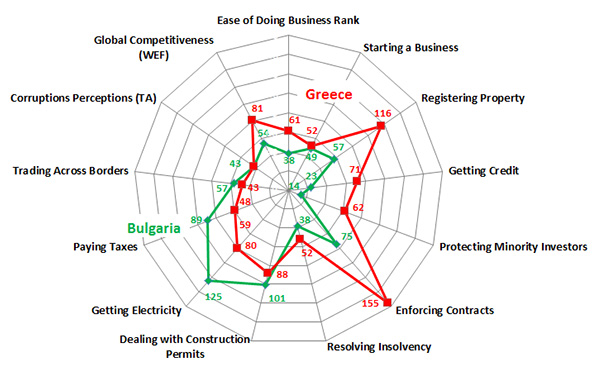 Greece is still three times richer than Bulgaria today in large part because it is part of the euro area, which is why the Greek population overwhelmingly favors continuing in the currency union.2 Greek living standards have a lot further to fall if its leaders pursue irresponsible policies. Any threat by the Syriza-led government to pressure the euro area with a "Grexit" has close to zero credibility, because such a threat would anger Greek voters. Tsipras thus needs a deal to avoid an economic catastrophe and remain in power.

The euro area, meanwhile, can afford to wait a while for a deal, even though it would generally benefit from avoiding economic uncertainty in Greece at a time of tepid economic growth. But unlike the situation in 2011–12, Europe's banks are better capitalized and have limited exposure to Greek assets, because European taxpayers have taken those assets off their books. In addition, the ECB's new QE program—which noticeably does not include Greek assets—will help facilitate stability in the euro area. The downside risk to the euro area from a confrontation with Greece is low, at least for now.

But the euro area also wants a deal for many reasons. European leaders would reap a large potential political prize from winning concessions from Tsipras, bringing him into the political mainstream and defanging radical leftwing movements elsewhere. A deal would also bury the long-term populist threat in Europe that many have long warned against, illustrating that political systems can absorb new political pressures within the economic and political constraint of countries' fiscal situations and the common currency. Thus a negotiated "new arrangement for Greece" is not impossible.

Tsipras has something to offer the euro area that only he can deliver—banishing the existence of a radical leftwing alternative completely outside the current euro area economic consensus. Turning Tsipras into a Greek version of former German Chancellor Gerhard Schröder, who ran left and governed right, is a long shot but not impossible, when he is faced with the disastrous consequences to his country of a confrontation with the euro area. Such a conversion would have political implications beyond Greece, and euro area leaders would be foolish not to explore it.

When Must a Deal Be Struck?

At the very latest, June/July 2015 would seem to be the deadline. At that point, Greece faces about €6.5 billion in euro bond repayments to the ECB, which it will not have the cash to honor without a new arrangement. A default against the ECB would end all liquidity provisions to Greek banks, including emergency liquidity assistance (ELA) from the Greek central bank. A quick economic death spiral would ensue.

There are earlier important deadlines that could speed the timetable. The current extraordinary extension of the Greek Troika Program review expires by the end of February, after which the eligibility of Greek government bond collateral offered by Greek banks to the ECB expires. A failure to further extend the program review could hasten the deadline.

Having vowed to end the Troika program, Tsipras has avoided even asking for another extension and would find it awkward to keep taking the Troika medicine, along with international oversight of the Greek economy.

Finance Minister Varuofakis's vow for Greece to "go cold turkey," end its addiction to debt, and avoid seeking a Troika program extension are disingenuous, given that he has also asked to issue €10 billion in new short-term treasury bills, as if one last drink will be a prelude to going sober. His proposal for a new T-bill issuance comes without new oversight from the Troika, enabling him to claim to have ended its oversight. The ECB has wisely rejected this proposal. Its regulatory arm is discouraging Greek banks from participating in any new Greek government T-Bill auctions. This type of moral suasion from the ECB is likely to be effective in constraining Greek bank behavior, because the ECB and not the Greek government has the regulatory power to revoke banking licenses. Future Greek government T-Bill auctions are thus likely to underperform until the deadline at the end of February.

As a result of lagging tax revenues and the likely failure of the new T-bill auctions, Greece may face a cash crunch even sooner than the timetable suggests—indeed in a matter of weeks. The euro area, seeking to appear reasonable and allow for more negotiations, may well grant Greece a further extension of the current review beyond the end of February. But the Greek government will have to ask for this extension first.

The recent decision by the ECB to stop regular provision of liquidity to Greek banks against Greek government issued and guaranteed collateral underlines the point. The Greek government must stop the political grandstanding and start negotiating. A reckoning can be put off by the central bank of Greece providing cash to Greek banks through its ELA program. But ELA is provided at the risk of the Greek central bank, which should convince the Greek government against doing something rash. With these actions, the ECB is signaling that at a time of its choosing3, but no later than June/July—it will cut off funding to Greek banks if Athens is deemed not seriously negotiating a new arrangement. Such a threat may gradually undermine confidence among Greek retail depositors in the Greek banking system. Many might want their money back, precipitating a flight of deposits. A bank run would threaten the solvency of Greek banks and pressure the Greek government to conclude a new deal.

As the economic realities tighten, Tsipras's government may have no choice but to ask for the review extension, buying time for negotiations before the June deadline. A request should buy perhaps three months of negotiating time until the end of June. It makes no sense for the euro area to extend the review beyond the hard deadline of June/July—unless they are willing to release money to Greece to pay back the ECB without getting anything in return.

Tomorrow: Part 2: What Kind of Deal Can Greece Hope For?

2. The outcome of the recent election confirmed this result again, as discussed previously here on RealTime.

3. A two-thirds majority on the ECB Governing Board is required to deny the Greek central bank the ability to provide ELA to Greek banks.