In his 2010 book, Beyond the Crash: Overcoming the First Crisis of Globalization, former Chancellor of the Exchequer and Prime Minister Gordon Brown took great pride in his fiscal stimulus in early 2009. His intention, as that of all well-meaning Keynesians, was laudably to increase output. However, the United Kingdom has persistently underperformed in terms of economic growth in the last decade, including the period marked by the stimulus. How can this be explained?

The Keynesian logic that Brown embraced is simple and convincing. If there is an output gap—that is, unutilized production capacity—fiscal policy should aim to stimulate aggregate demand. The fiscal means of doing so is to increase the budget deficit, either by boosting public expenditures or by cutting taxes.

As a counter illustration, I would cite the case of Sweden. With its very strict fiscal policy, Sweden deployed a range of available policy options, and their effects can be measured with the use of data from Eurostat and the International Monetary Fund (IMF). I have chosen 1997, when Tony Blair became prime minister and Gordon Brown chancellor of the exchequer, as the starting year and proceeded until the present (2011). Admittedly, the Conservative/Liberal coalition government took over in April 2010, but that is a short tail end of our story. 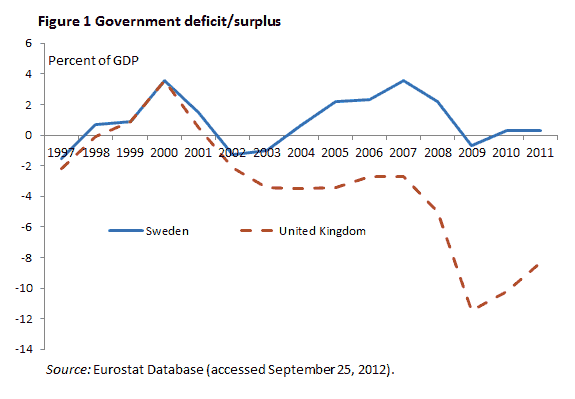 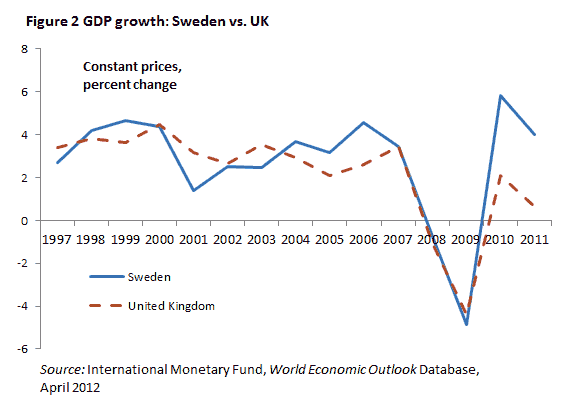 This pairing of two countries with opposite fiscal policy during the crisis suggests that a large fiscal stimulus was not a wise policy in the crisis. Contrary to the Keynesian orthodoxy, there was a strong negative correlation between budget deficit and economic growth. Over the period of 1997–2011, an increase in the fiscal deficit of 1 percent of GDP in the United Kingdom resulted in an average decline in GDP of 0.43 percent (figure 3). An expansion of the fiscal deficit did not stimulate but impeded economic growth, contrary to the Keynesian view of the world. 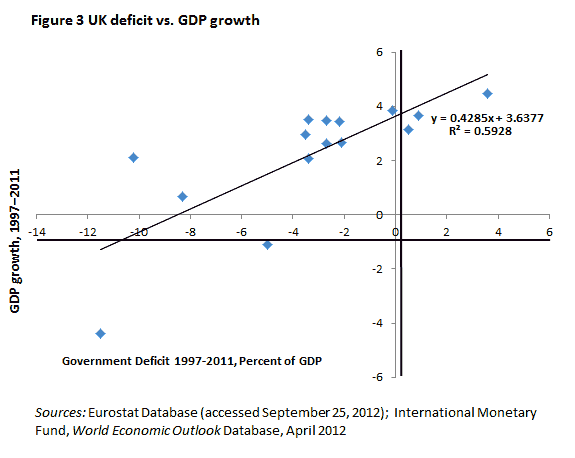 Thus Gordon Brown's proudly announced stimulus turned out to be not only futile, but even harmful. To control this observation, we check the correlation between public expenditure and economic growth. We obtain an equally strong and negative correlation (figure 4). An increase of public expenditure of 1 percent led to an average decline of GDP of 0.42 percent. 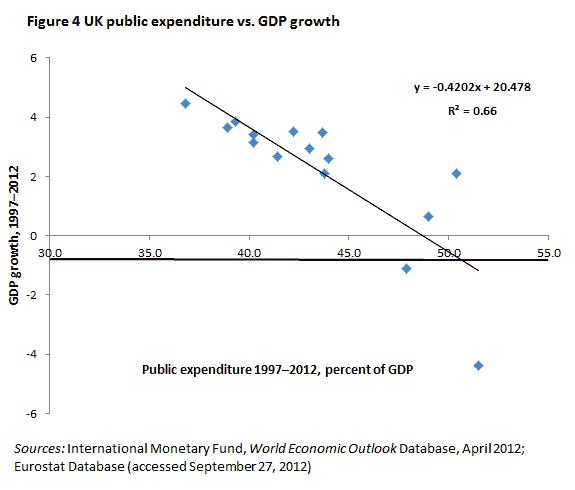 We may return to the discussion in 2009–10 about the possibility of "contractionary expansion." Alberto Alesina and Silvia Ardagna (2009) offered statistical evidence for the thesis that "fiscal adjustments...based upon spending cuts and no tax increases are more likely to reduce deficits and debt over GDP ratios than those based upon tax increases." Eminent examples of countries that carried out radical fiscal adjustment and moved to a higher growth trajectory are Sweden and Finland in the early 1990s.

The IMF (2010, 113) has contradicted this thesis, having applauded the stimulus measures of many countries after 2008. Yet, it has also acknowledged that "an expansion in net exports usually occurs and this limits the impact on GDP" and "[c]entral banks usually offset some of the contractionary pressure by reducing policy rates." Moreover, the IMF found "that spending-based deficit cuts...have smaller contractionary effects than tax-based adjustments."

The data from the United Kingdom show something else, but related—namely, that a so-called fiscal stimulus does not necessarily stimulate economic growth. An increase in the budget deficit can actually harm economic growth. The empirical data cover a period of no less than 15 years, a much longer time horizon than in the IMF argument, which should make it both more significant and more relevant.

It is not as if Keynes's theory should be discounted in all circumstances. But there are at least five plausible explanations for why it did not work in the case of Britain and Sweden.

First, a fiscal stimulus makes sense only if an output gap exists. During the years of overheating from 2004 to 2007, the United Kingdom probably worked at full capacity and had no output gap. In this period, budgets should have been in surplus according to standard Keynesianism, as was the case in Sweden from 2004 until 2008. The persistent British budget deficits of about 3 percent of GDP during the boom years could not stimulate growth in an economy close to full capacity. In hindsight, the United Kingdom would have been better off with a budget surplus in these years (figure 1).

Third, a little noticed problem with the Blair/Brown governments was that they pursued an extraordinary surge in public expenditures of no less than 15 percent of GDP from 2000 until 2009 (figure 5). Rarely, has an economy been exposed to such a sudden increase in its public burden so quickly in peacetime. This was another reflection of economically harmful catering to those interests dependent on government spending, especially public employee unions.

Finally, the incentive structure for economic actors is likely to have deteriorated. Brown was infamous for introducing all kinds of small nuisance taxes that were cumbersome and costly for entrepreneurship. Rising marginal taxes and increasing social benefits undermine incentives for work and entrepreneurship.

Since UK monetary policy has been highly accommodating all along, it cannot have been a restraining factor, and we may disregard it in this discussion.

This reasoning leads to three conclusions. First, an increase in the budget deficit does not necessarily stimulate economic growth. If the economy is working at nearly full capacity, a budget surplus is preferable, as traditional Keynesianism teaches us. Ex post perceived output gaps are often revised downwards as apparent production capacities turn out to have been economically obsolete.

Finally, the dominant picture of New Labor has been one of poor economic policy: unjustified budget deficits, excessive increases in public expenditures for no apparent reason, and an absence of structural reforms. Bad economic policy does not condemn Keynesianism. Nor should it be defended as Keynesianism.

Åslund, Anders. 2010. The Last Shall Be the First: the East European Financial Crisis. Washington: Peterson Institute for International Economics.

Europe Needs a Reward for Its Austerity: Is a "Maastricht Bond" the Answer?