As the debate continues over the potential inflationary impact of President Joseph R. Biden Jr.’s $1.9 trillion “American Rescue Plan,” one key indicator suggests that markets are no more worried about excessive inflation than the Federal Reserve is. “Inflation compensation” in US 10-year Treasury securities has jumped 0.25 percentage point since January 14, when Biden first proposed the package. (Inflation compensation, also known as “breakeven inflation,” refers to the yield on a conventional bond minus the yield on an inflation-indexed bond of the same maturity.) The current value of inflation compensation, however, is fully consistent with the Federal Open Market Committee's goal for inflation of 2 percent, after having been somewhat below that level last year.[1]

So, despite all the hand-wringing in some quarters, the bond market is apparently not worried about excessive inflation. On the other hand, to give the hand-wringers their due, history suggests we should not take much comfort from the bond market, because it has not managed to predict any notable change in inflation since World War II in the major advanced economies.

A previous post showed that bond yields in the United States, United Kingdom, Japan, and France since the 1950s have not been good predictors of future inflation. An important qualification of those results is that they are not able to distinguish between movements in bond yields owing to expected future inflation and movements owing to the expected real rate of return.

The development of inflation-indexed bond markets in advanced economies since the 1980s creates a security whose yield is fixed in real, or inflation-adjusted, terms.[2] Inflation compensation can thus be measured directly as the (nominal) yield on a conventional bond minus the (real) yield on an inflation-indexed bond of the same maturity. The main limitation of inflation compensation as a guide to the predictive power of bond markets for inflation is that it is not available during the key decades of the 1960s and 1970s, when inflation rose dramatically, or the early 1980s, when inflation began to fall. 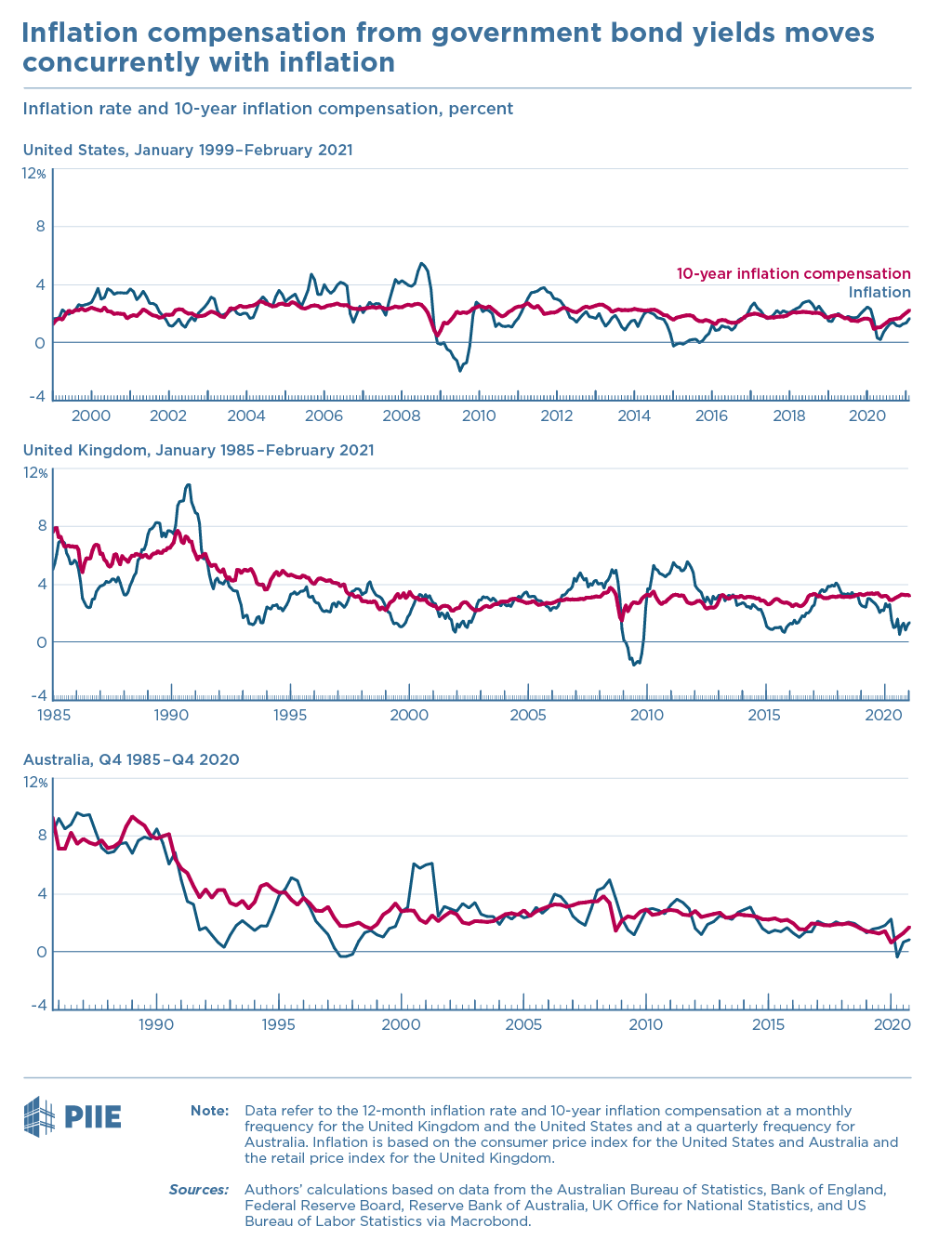 2. An inflation-indexed bond, such as a Treasury Inflation Protected Security (TIPS), pays a yield that is fixed in real terms because the principal value used to calculate coupon and redemption payments grows by the rate of inflation each year.

3. The current 12-month inflation rate is effectively a 1-year backward average of inflation. In the United Kingdom, retail price index inflation is used because inflation-indexed bonds are linked to that measure of prices. For Australia, the regression includes a dummy variable to control for the imposition of the Goods and Services Tax in July 2000. The coefficients on Brent oil price changes are statistically significant, but the results for the predictive power of future inflation are not sensitive to dropping oil prices.