President Joseph R. Biden Jr.’s audacious proposal for $1.9 trillion in additional stimulus this year has generated concern among some, including former Treasury Secretary Lawrence H. Summers, that the package may overheat the US economy and cause inflation. Yet the bond market, often a place where such concerns are registered, does not seem worried. Current changes in bond yields suggest only a tiny rise in future inflation.[1] Could the markets be telling us something?

In fact, bond market complacence should not be taken as strong evidence against the risk of overheating. The postwar history of US and foreign bond markets shows that bond yields are not good predictors of inflation. Yields largely reflect the behavior of inflation over many years in the past, not the future. It is far from clear whether inflation will rise significantly, but if it does, bond markets are not likely to have predicted it.

In the standard textbook model, bond investors care about future inflation over the life of a bond because inflation reduces the real value of their future investment returns. The 10-year yield should thus be a good indicator of concerns about inflation over the next 10 years. Higher expected inflation ought to result in a higher bond yield.

The following lines show that forward averages of inflation have coefficients near 0 and do not improve the fit at all compared to a regression on current inflation only. Thus, bond yields are not good predictors of inflation over any future horizon.[4] This calls into question the value of Churchill’s dictum, for predicting inflation at least.

Roughly similar results are obtained for the United Kingdom, Japan, and France. In each country, the 10-year backward average of inflation is the best predictor of 10-year bond yields. In the United Kingdom and France, yields respond slightly to average inflation 1 to 2 years ahead,[5] but the improvement in the R2 is tiny. Only in Japan do bond yields have any predictive power over long-run future inflation, but the coefficients, though statistically significant, are far below 1 and the increase in R2 is small. Even in Japan, 10-year backward inflation is a far more significant predictor of yields than any measure of forward inflation.

These results are supported by a casual examination of bond yields and inflation in each of these countries, shown in the figure below. The shaded regions denote periods in which inflation broke out significantly above or below its 5-year moving average. Yield movements in the months immediately prior to these episodes are small and as often in the wrong direction (opposite to the coming inflation shift) as the right one.[6] For the most part, yields move concurrently with inflation, with occasional evidence of a lagged response.[7]

In the United States, yields were flat before the first inflationary episode. They then rose steadily during the episode, reaching a peak concurrently with the peak in inflation. Yields rose a bit shortly before each of the next two inflationary episodes, but inflation also started to rise shortly before it crossed its 5-year moving average, marking the start of the episode. Yields continued to rise during each episode, reaching a peak a few months after the peak in inflation. Bond yields reached their all-time peak just two months before the start of the sole disinflationary episode, beginning to fall at exactly the same time as inflation.

The largest episodes of inflation and disinflation tended to occur in the 1970s and 1980s. Since then, movements of inflation have been smaller and briefer. There has been a trend of declining yields relative to inflation, the widely noted falling real interest rate. Fluctuations around this trend generally seem to be concurrent with fluctuations in inflation, neither leading nor lagging inflation to any noticeable degree.

Overall, there is no evidence to suggest that bond markets are good predictors of inflation. 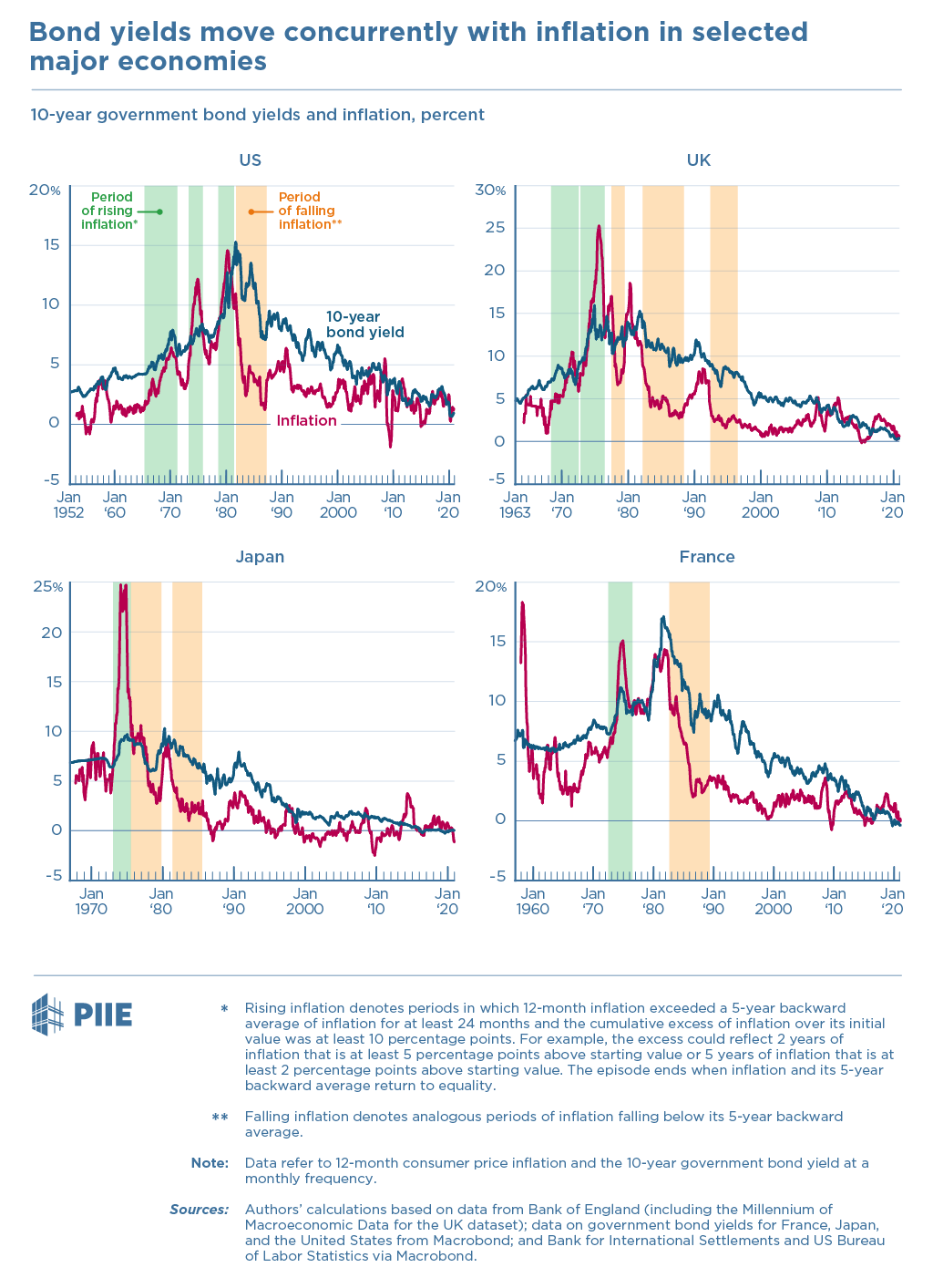 2. The current 12-month inflation rate is effectively a 1-year backward average of inflation.

5. These coefficients are statistically significant in the United Kingdom but not in France, based on Newey-West standard errors allowing for 12th-order autocorrelated residuals.

6. Three episodes just missed the 10 percent cutoff: the rise of inflation around 1990 in the United Kingdom and the bursts of inflation just before 1970 and around 1980 in France. In none of these episodes did yields display any noticeable anticipatory increase.