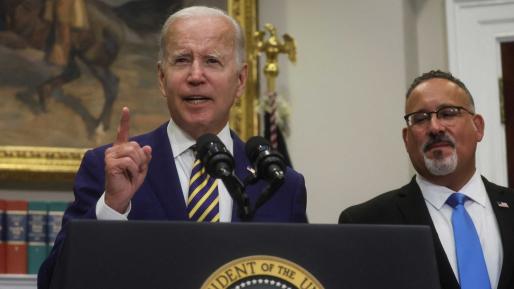 President Joseph R. Biden, Jr.’s plan to forgive a substantial portion of the $1.6 trillion in outstanding federal student loans has provoked a debate among economists over its inflationary impact. Three different arguments have been advanced.

First, that the plan would add a very small amount to inflation in 2023, perhaps 0.05 percentage point. Thus, if this perspective proves accurate, implementation of the plan might cause the consensus forecast for consumer price index (CPI) inflation over the four quarters of 2023 among analysts surveyed by Bloomberg to increase from 2.7 percent currently to 2.75 percent.

A second point of view holds that the plan would add a more substantial amount to inflation in 2023, perhaps on the order of 0.2 to 0.3 percentage point, possibly enough to drive the consensus forecast for CPI inflation up to 2.9 or 3.0 percent—still not a gamechanger relative to what we’ve been through but a more noticeable step in the wrong direction.

A third argument contends that it would reduce inflation in 2023 by a very small amount, again perhaps around 0.05 percentage point, maybe lowering the consensus CPI inflation forecast for 2023 from 2.7 percent to 2.65 percent.

A case can be made for each of these three points of view.  My preference is for the first argument—that if the plan goes through, it will probably incrementally increase inflation next year by a very small amount. However, under any of these three perspectives, the inflation consequences of the president’s plan are likely to be small, and the overall assessment of the plan should rest much more on issues of fairness, redistribution, and efficiency rather than macroeconomic concerns.

First perspective: Adding about 0.05pp to inflation in 2023

No official “score” of the proposal is yet available, but the Committee for a Responsible Federal Budget (CRFB) estimates that the overall package (forgiveness plus other aspects) will cost the federal government about $500 billion.[1]

For purposes of the rough calculations reported below, I treat the $500 billion as one sum without differentiating as to the source. In comparison, the recently enacted infrastructure bill included $550 billion in new spending over five years. The Inflation Reduction Act of 2022 included $374 billion in climate and energy provisions. The federal government spent about $750 billion in FY2021 on Medicaid, which provides healthcare for low-income individuals.

The inflationary impact of the student debt plan will depend on how much households decide they want to boost their spending as a result of their improved financial position. One can estimate the increment to annual spending by gauging how much less borrowers will have to remit to the federal government if the plan goes through, and then assuming that spending will increase by the same amount.

Let’s assume that the average effective interest rate on loans forgiven under the plan would have been 6 percent and the average remaining term would have been 15 years. Under those assumptions, payments on $500 billion would total $50 billion per year. (This number is surely too big, as total federal receipts on the student loan portfolio in 2019 were only $70 billion, but never mind that; I am erring here on the side of making the numbers too big.) Scaling the $50 billion by nominal GDP in the second quarter of 2022 ($24.88 trillion), the reduction in payments would be 0.2 percent of current GDP.

If households spend 100 percent of that improvement in their cash flow (again, probably an overestimate, but maybe not by much), then the increment to aggregate demand likewise will be 0.2 percent of GDP.

Now assume that inflation behaves as described by a standard Phillips curve. Since about 1990, the Phillips curve appears to have been extremely flat. If the calculations were based on that slope, it would be difficult to generate any material inflationary effect, no matter how large the financial benefit conferred on households.

So as not to stack the deck against finding a meaningful inflationary effect, let’s assume instead that the slope of the Phillips curve has reverted to its value from 1968 to 1990—when each percentage point increase in the output gap generated roughly an additional 0.2 percentage point in inflation.

This amount is small, likely to be lost in the noise of the actual chaotic world, and (subject to the basic modeling assumptions) likely to overstate the true effect.

One can derive a larger estimate of the likely inflationary impact of the president’s plan by maintaining all the assumptions outlined above except the one having to do with the slope of the Phillips curve.

In light of the fact that the economy is already running flat out, some analysts adopt the alternative assumption that any further increment to aggregate demand will show up entirely as an increment to prices. In other words, the aggregate supply curve takes the shape of a “backwards L.”

Third perspective: Reducing inflation by about 0.05pp in 2023

At the same time as the president announced the debt forgiveness plan, he also announced one more extension of moratorium on student loan payments, to December 31, 2022—but stated that the moratorium will end there. In other words, payments will resume at their normal level on the nonforgiven portion of the debt on January 1, 2023.

Roughly a third of the debt would be forgiven, but two-thirds would not if the plan is implemented. The president’s announcement implied that payments on the nonforgiven portion of the debt will resume just as households are reveling in their reduced level of indebtedness.

Even during the moratorium, payments on student debt didn’t go to zero; they went down only by about two-thirds. As a result, the resumption of regular payment requirements won’t have quite as contractionary an effect as it would have if payments had gone to zero. Nonetheless, the increase in payments to the federal government is likely to exceed the reduction from the debt forgiveness.

Under this line of reasoning, the White House and some others have argued that the net effect of the president’s plan could be to reduce inflationary pressure, not increase it.

Is one estimate a better bet than the others?

Opponents seem likely to challenge the president’s authority to forgive such a large amount of debt. If that challenge succeeds, the whole issue will be moot. But suppose that the plan takes effect.

For my money, the first perspective is the most reasonable. Even if we assume a Phillips curve just as steep as it was in the bad old days of the 1970s, we still get an increment to inflation of less than 0.1 percentage point. If—on the other hand—the Phillips curve maintains its shape of the three decades leading up to the pandemic, the increment will be vanishingly small. Either way, the Federal Reserve will have a substantial challenge on its hands in bringing inflation back down to 2 percent, and this provision will barely change the calculus.

The second perspective has the virtue of simplicity. It is based on a model we economists often present to students in introductory classes. But it runs contrary to historical experience. The economy does, from time to time, operate with output above its estimated “potential” level, and there’s little evidence that the Phillips curve has dramatically changed slope at those moments.

The strongest argument on behalf of the third perspective is that analysts might have been expecting the president to extend the payment moratorium beyond the end of this year—and perhaps far into the future. In that case, they could indeed revise down their inflation projection based on the totality of the president’s announcement. However, as Jason Furman has pointed out, this approach gives the president credit for ratifying a provision (that payments would resume) that already was part of current law. Giving him credit for making this decision is a little like giving him credit for notcutting taxes or not increasing spending in some other way. Relative to current law, the plan clearly confers a net benefit on student loan borrowers.

But the larger point is that regardless of which perspective turns out to be most accurate, the impact on inflation seems likely to be small, measured against the scale of the overall inflation problem the US is facing. A one-time increment or decrement of a couple of tenths will be lost in the fog of the inflation battle.

There are more important considerations

Regardless of which perspective is best, it seems clear that the inflationary consequences of the plan are of secondary importance, at most. The more important considerations bearing on this debate are ones centered in fairness, redistribution, and efficiency.

These issues should be at the center of this debate, rather than the incremental impact the plan might or might not have on inflation.

1. The Penn Wharton Budget Model puts the cost of the plan at $605 billion, and potentially more than $1 trillion depending on how the new income-driven repayment option is structured and how borrowers respond to it.

The Schumer-Manchin Bill Will Ease Inflation and Climate Change