Banking regulation in the euro area: Germany is different

Despite progress in recent years toward a single banking policy framework in the euro area—a banking union—much of the German banking system has remained partly sheltered from uniform rules and disciplines that now apply to nearly all the area’s other banks. The resulting differences in regulatory regimes could generate vulnerabilities in the still-incomplete banking union, which is being tested in the COVID-19 pandemic.

Two reports published in early 2020 shed new light on this challenge. The European Central Bank’s (ECB) risk report on less significant institutions is the first of what is intended to be an annual series. The other report is the European Commission’s impact assessment study on the most important differences between accounting standards used by banks in the banking union, which was prepared by legal consultants for the Commission’s Directorate-General for Financial Stability, Financial Services and Capital Markets Union (DG FISMA). The reports provide comparative quantitative information that was not previously available in the public domain.

The new data highlight differences in rules and oversight in different euro area countries that matter in the context of efforts to achieve an EU single market and banking union. From a single-market perspective, the fact that many German banks are subject to a different supervisory, state-aid, and accounting framework raises the possibility of competitive distortions, even though a subset of these banks only have local activity and don’t compete outside Germany. German stakeholders might misjudge and underestimate the extent of EU-imposed discipline in the banking sectors of other member states, by wrongly assuming that national discretions and exceptions in those countries are similar to those in Germany. Conversely, in euro area countries other than Germany, a politically corrosive perception of unfairness can arise from differences in regulatory and/or supervisory treatment. From a banking union perspective, the exceptions could, at least in certain scenarios, contribute to fragmentation of the euro area financial space and thus to the risk that bank-sovereign vicious circles become worse, and potentially unmanageable.

The history that led to this situation is too long to summarize here. In a nutshell, the banking systems of a number of euro area countries previously displayed significant idiosyncrasies, memorably expressed by former Italian prime minister Giuliano Amato’s description of Italy’s banking system in 1988 as a “petrified forest.” But in Italy as in other euro area countries, successive waves of reform have eroded such idiosyncrasies. Germany has reformed less than most others, largely because circumstances have not compelled it to do so. It also has unique leverage over EU legislation, which could have played a role in the creation or persistence of legislative loopholes. Furthermore, Germany’s public bank community is uniquely intertwined with its political community.

Smaller German banks, including those in mutual support groups, are the main exception from direct ECB supervision

The ECB risk report gives, for the first time, a national breakdown of the assets of significant versus less significant institutions in the euro area. This distinction matters for assigning supervisory authority within the banking union. Significant institutions (SIs) are all euro area banks with more than €30 billion in total assets, plus a few more that are below this threshold but fulfill other criteria that include cross-border activity and prominence within a single country. Less significant institutions (LSIs) are all the other euro area banks. The ECB deems only a small number of banks as SIs for reasons other than total assets above €30 billion (31 in the ECB’s latest listing compared with more than 2,600 LSIs), so the asset-size criterion primarily, though not entirely, determines the boundary between SIs and LSIs. The ECB directly supervises SIs, while national supervisory authorities carry out most supervisory tasks related to LSIs (though the ECB has authority over banking licences and other infrequent procedures). The ECB also exercises oversight over the national supervision of LSIs.

A fact that jumps out from the ECB report is that LSIs are found disproportionately in Germany (figure 1). At end-2018, German LSIs represented 55 percent of total LSI assets in the euro area, whereas Germany accounted for 25 percent of total euro area bank assets (LSIs and SIs). 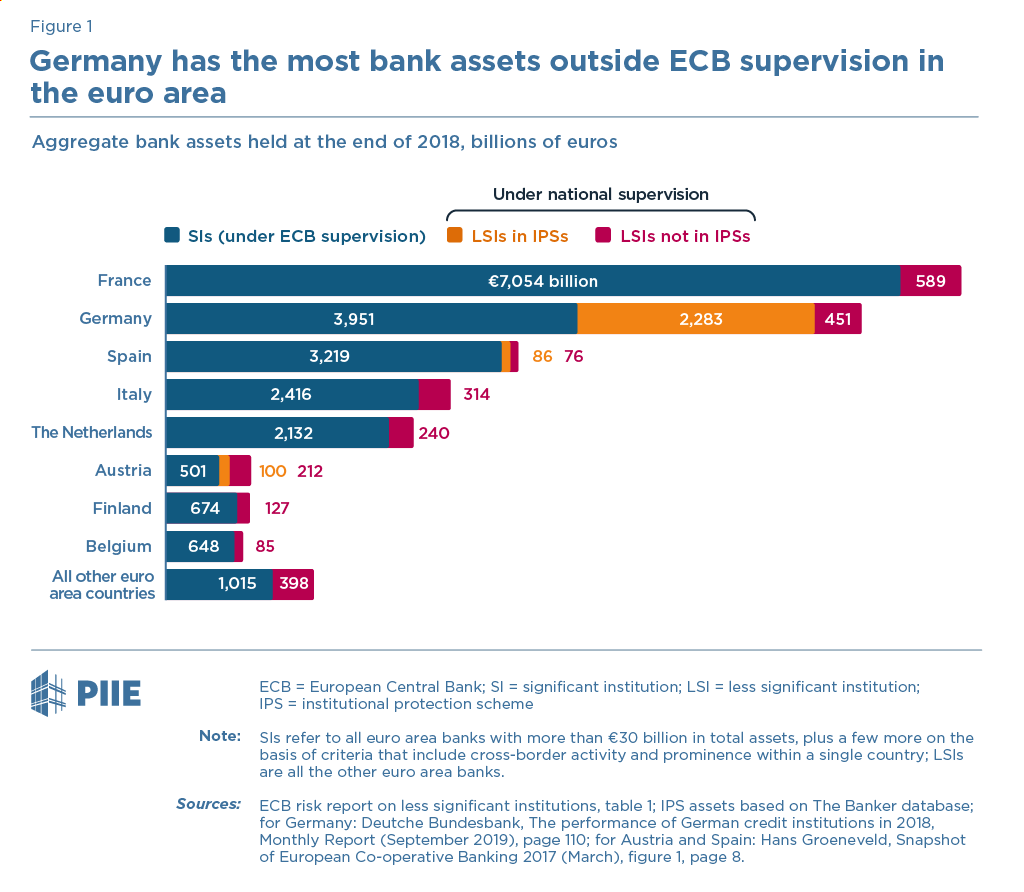 The vast majority of German LSIs, however, are not fully on their own, even though they are managed on a decentralized basis. They benefit from mutual support arrangements known in EU prudential law as institutional protection schemes (IPSs), labeled “virtual groups” by the ECB’s then second most senior supervisor, Sabine Lautenschlaeger, at the start of her tenure in 2014. LSIs within an IPS support each other: If and when one becomes unviable, its peers generally rescue it. As a consequence, the group as a whole, rather than its individual member banks, is the relevant level of observation for financial stability purposes. As figure 1 shows, not all LSIs belong to an IPS. Conversely, all existing IPSs include at least one SI.

There are two IPSs in Germany: the Savings Banks Finance Group (Sparkassen-Finanzgruppe) and the Volksbanken Raiffeisenbanken Cooperative Financial Network (Genossenschaftliche Finanzgruppe Volksbanken Raiffeisenbanken, hereafter “Cooperative Group”). Entities in the Sparkassen-Finanzgruppe belong to the public sector and are controlled by different subfederal levels of government under various legal forms and ownership patterns. Such entities include local savings banks (Sparkassen) and regional wholesale banks (Landesbanken). Individual cooperative members ultimately own entities in the Cooperative Group.

As of end-2018, based on data from the German central bank, LSIs in the Sparkassen-Finanzgruppe represented 45 percent of total German LSI assets. Those in the Cooperative Group, including buildings and loan associations, represented another 39 percent. In recent years, both groups have published group-level financial statements (using accounting methods, respectively, of aggregation and consolidation), which indicate that, taken together including their SI members, they are among the largest banking players in the euro area. Indeed, in 2018 the Sparkassen-Finanzgruppe in aggregate had more assets than any euro area bank (figure 2). 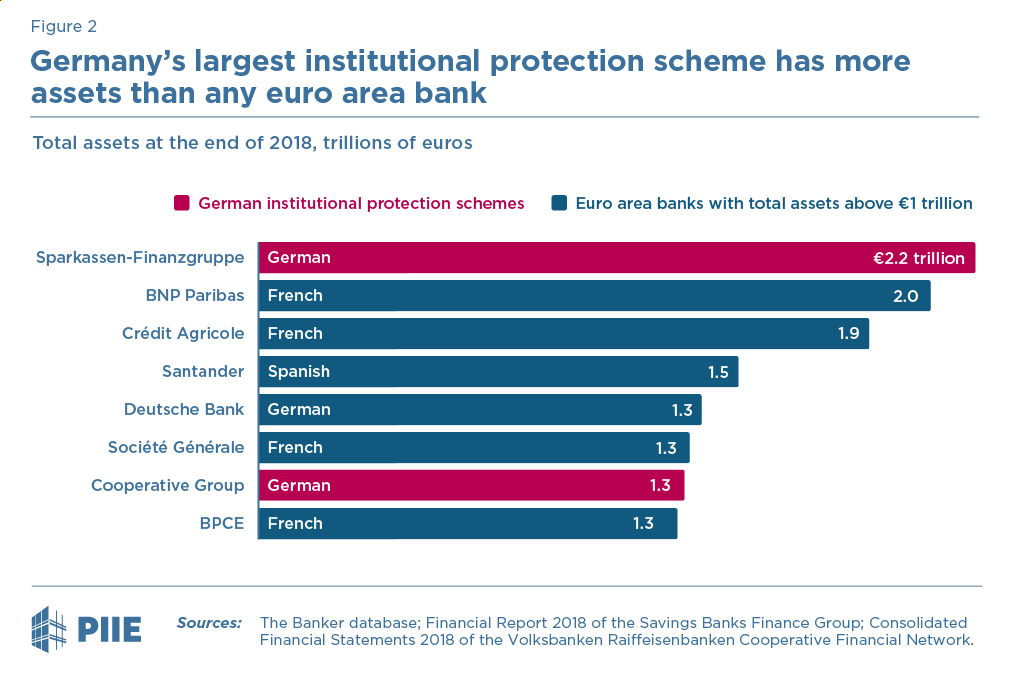 On the basis of publicly available information, it is difficult to assess the specific differences, if any, between the supervisory regimes of the ECB (applicable to SIs, including those in IPSs) and of national authorities (applicable to LSIs, including those in IPSs). Successive EU capital requirement directives and regulations have largely harmonized the legislative framework for supervisors, which has come close to the aspirational vision of a “single rulebook.” Thus, differences that may remain despite the above-mentioned ECB supervisory oversight, are mostly in supervisory enforcement and discretion. There are indications that at least some banks prefer being labeled LSIs. For example, L-Bank (full name Landeskreditbank Baden-Württenberg Förderbank), a public bank in southern Germany, unsuccessfully sued the ECB over its SI determination. New legislation later removed the bank from the scope of application of EU banking law altogether (together with two other former German public SIs, NRW.Bank and Landwirtschaftliche Rentenbank), and it is no longer under direct ECB supervision.

European banks are subject to state-aid control conditions, enforced by the European Commission. The application of these disciplines, however, takes a distinctive form for unlisted public-sector banks, for which the boundary between an arm’s-length recapitalization (with the government providing funds as a shareholder) and state aid (the government transferring funds in a nonmarket transaction) is less well defined than in cases when there are shareholders other than public-sector entities. The leeway that results from full government ownership was put under the spotlight in the recent case of Norddeutsche Landesbank (or NordLB), a public bank in northern Germany, which was recapitalized by its public-sector shareholders in a transaction that the European Commission deemed “market conform” in December 2019 but that was widely viewed as distortionary by external observers. The NordLB decision itself had precedents, particularly in the cases of Portugal’s Caixa Geral de Depósitos in 2017 and Romania’s CEC Bank in October 2019. The upshot is that the state-aid regime appears to be different for unlisted public-sector banks than for other banks, in practice if not in theory.

Possibly for the first time, the ECB’s risk report on LSIs, combined with data on assets of individual SIs and a few no-nonsense assumptions, permits a tentative mapping of such banks in the euro area. Figure 3 shows the results of these calculations. They suggest that, as with LSIs, unlisted public-sector banks in the euro area are predominantly located in Germany. Namely, the Sparkassen-Finanzgruppe includes all of Germany’s unlisted public SIs and most, if not all, of its unlisted public LSIs. 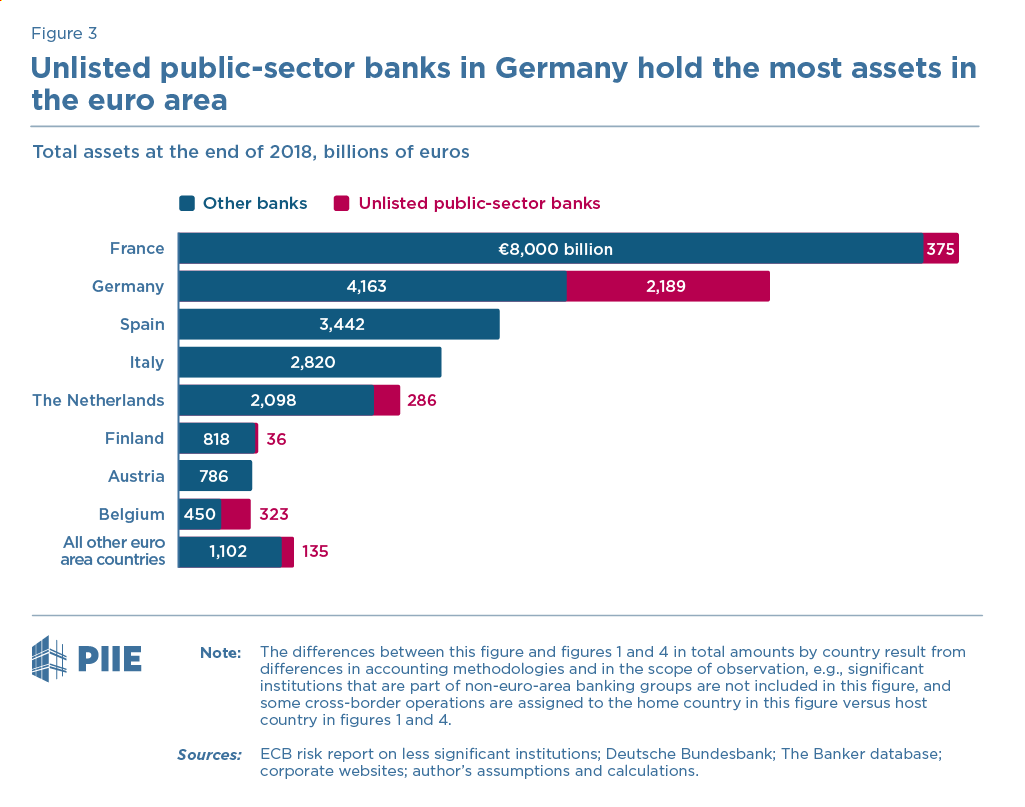 In landmark legislation adopted in 2002, the European Union mandated the use of International Financial Reporting Standards (IFRS) for all companies listed on public stock exchanges, starting in 2005. For unlisted companies, however, including unlisted banks, the choice of accounting standards was left to the discretion of individual member state authorities. This stands in contrast to most of the world’s jurisdictions outside the European Union, where all (listed and unlisted) banks generally have to comply with IFRS or, in the case of the United States, Generally Accepted Accounting Principles (US GAAP).

The DG FISMA report on banks’ accounting practices includes an overview of which banks (aggregated by country and by assets) use which set of accounting standards, IFRS or national standards. Germany stands out with 52.1 percent of bank assets reported under national standards. The next highest ratio is much lower, in Austria (22.7 percent), followed by the Netherlands (5 percent), and under 2.5 percent in all other member states. Figure 4 illustrates these findings.

Figure 4 implies that only two systems of accounting standards remain in wide use in the euro area banking system: IFRS and German national standards. Whether one is more demanding than the other depends on the issue; the DG FISMA report gives a wealth of detail on the differentiated outcomes. For example, for credit loss accounting, IFRS require expected loss provisioning as mandated by the Group of Twenty (G-20), while German standards preserve more flexibility to maintain the prior practice of incurred loss provisioning. 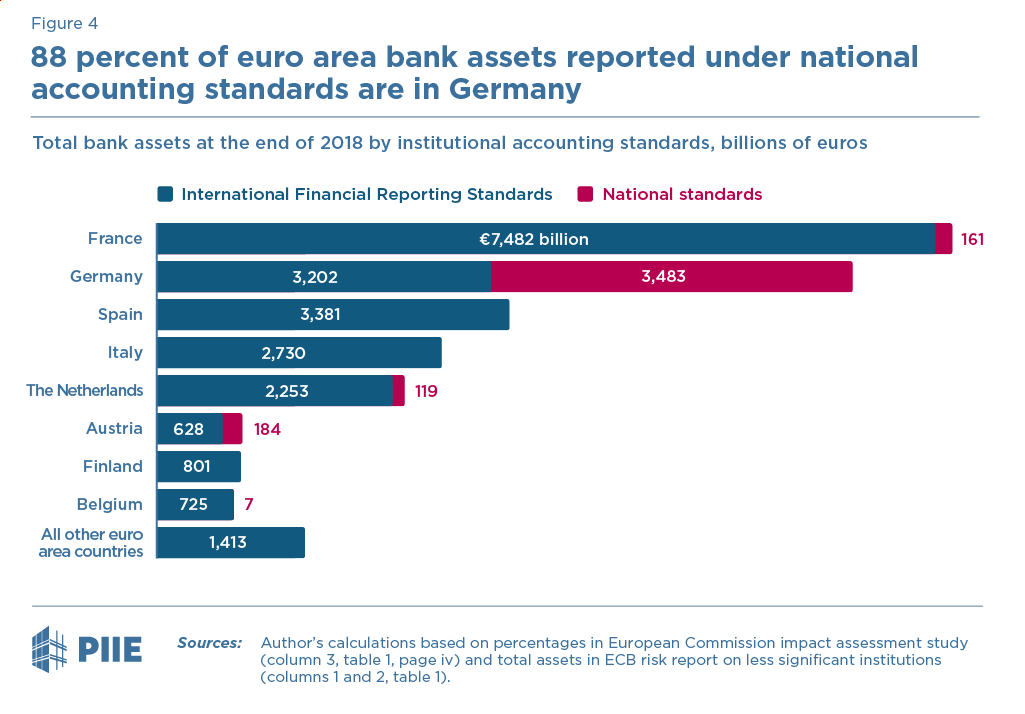 It is too early to assess the extent to which the COVID-19 pandemic may influence future debates and decisions on the still-unfinished banking union. By providing additional data on structural quirks of the euro area banking system, the two reports analyzed in this post contribute to a trend of greater supervisory transparency. Further efforts in that direction will hopefully contribute to better-informed policymaking when dealing with the difficult challenges ahead.