Russia is heading toward a serious financial squeeze next year, despite the confident statements of President Vladimir Putin. The official figures accounting for Russia's international reserves show a dramatic decline in international reserves, but an examination of the numbers reveals that the situation is far worse than the Kremlin says, raising serious questions about the sustainability of Russian reserves in the future.

It is not hard to understand the reasons for Russia's problems. Under Putin, Russia has been pursuing a policy of state and crony capitalism and protectionism, which has brought the economy to stagnation. Second, Russia's military aggression against Ukraine has unleashed severe international financial sanctions against Russia, which have stopped financial inflows and will reduce investment and growth for years to come. Third, the global commodity boom is over, and oil prices have finally started falling. Given that markets usually overshoot, oil prices are likely to fall far and for long.

A careful analysis of the numbers tells the story. On November 6, Bloomberg reported that Russia's usable international reserves were only $244.5 billion. The article appears to have had a sound basis, but the situation has grown much worse since then.

Both the Central Bank of Russia (CBR) and the Russian Ministry of Finance publish timely and detailed reserve statistics, and their transparency is credible. The latest reading by the CBR is that Russia's total international reserves amounted to $421 billion on November 7. That sounds quite reassuring, but these reserves fell from $524 billion on October 31, 2013. Thus Russia has lost $103 billion of reserves in one year (figures 1 and 2). 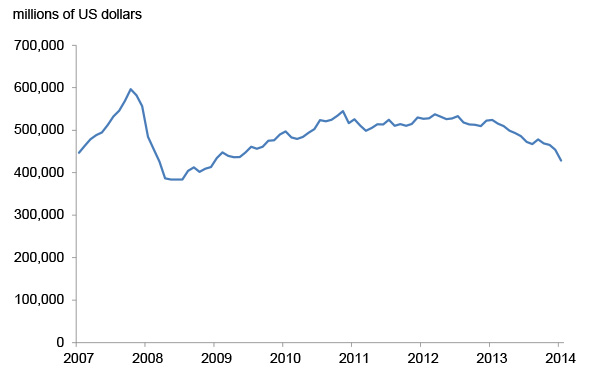 In addition, four substantial components should be deducted from the total. First, Russia has a large volume of gold valued at $45 billion. Second, it holds $12 billion with the International Monetary Fund and in the form of special drawing rights (SDR). This is not cash, so the sum of $57 billion should be deducted, coming down to $364 billion, still a substantial amount.

Unlike many other countries, Russia counts its two sovereign wealth funds as shares of the CBR reserves, which is a doubtful accounting practice. Two such funds, the National Wealth Fund and the Reserve Fund, are both controlled by the Ministry of Finance, giving the CBR no direct access to them. Any allocation from them would require government approval. One can argue that such approval poses no great obstacle in Putin's authoritarian Russia, but while Russia is not a very legal state, it is highly legalistic, and Putin might not want to lose these funds, which have explicit restrictions on their use. 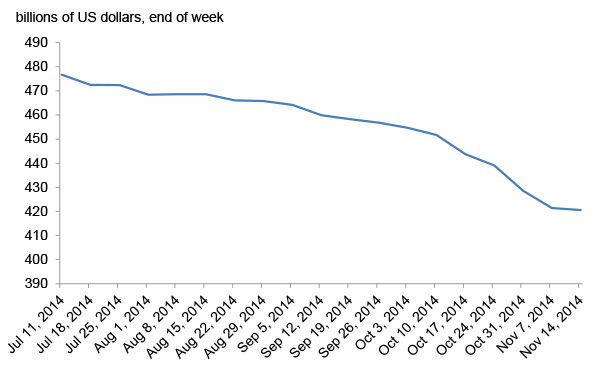 For example, the mission statement of the National Wealth Fund (NWF), which holds $82 billion, reads that it “is a part of federal budget assets. NWF is dedicated to support [the] pension system of the Russian Federation to guarantee long-term sound functioning of the system. [The] Fund's primary assignments are to cofinance voluntary pension savings of Russian citizens and to balance [the] budget of Pension Fund of the Russian Federation.” In practice, much of the money is spoken for by all kinds of infrastructure projects. Igor Sechin, the ambitious CEO of Rosneft, the giant oil company, wants to appropriate $49 billion of the NWF to refinance Rosneft's wasteful purchase of another oil company, TNK-BP. The NWF cannot be considered usable reserves. Not counting them brings the total down to $282 billion.

Why is this figure dangerously low? Reserves need to be measured in relation to current account balance and foreign financial commitments. The standard minimum level of reserves is three months of imports. In 2013, Russia's imports amounted to $341 billion , requiring $85 billion of reserves. Russia easily passed that measure. Moreover, in 2014 imports have plummeted with the lower oil price and thus exchange rate.

The Russian corporate sector has foreign exchange liabilities of roughly $150 billion a year. Considering that the US and European Union (EU) financial sanctions imposed in July have virtually stopped all credits to Russia, there will be no significant refinancing. The only relief from these liabilities is the current account surplus that is likely to be $60 billion.

The picture suddenly becomes worrisome if one looks at the near future. In one year, Russia's international reserves are likely to shrink by $90 billion (foreign repayments of $150 billion minus a current account surplus of $60 billion), if nothing extraordinary happens, leaving Russia with only some $100 billion of usable reserves in late 2015, possibly covering four months of imports.

But last July, Russia had a total foreign indebtedness of $730 billion. The state sector cannot refinance, and the private sector wants to pay back its foreign currency debts as fast as possible because of the falling ruble, whose exchange rate has slumped 30 percent versus the US dollar so far. The situation looks like a house of cards and Russians know such dangers all too well from 1998. Anybody in Russia with an understanding of international risks realizes the necessity of moving all free cash out of rubles and out of Russia as soon as possible, and many Russians are doing so. The CBR expects a capital flight of at least $120 billion this year.

But this outflow will lead to a dangerous spiral of falling oil prices and a falling ruble exchange rate. Both are down by 30 percent this year in relation to the dollar, and there is no reason for the depreciation to stop, producing a rise in inflation. Inflation has risen to 8.5 percent this year and is set to exceed 10 percent in the first quarter of 2015. The highly competent CBR leadership is well aware of the problem. It is raising interest rates aggressively, most recently by 150 basis points to 9.5 percent, but that increase is not stopping depreciation or capital outflows because all economists expect further oil price declines and an ever worse business environment.

The CBR cannot fix the exchange rate. That was the mistake of 2008–09, when Russia lost $200 billion in three dark winter months until it let the exchange rate float (figure 1). Currently, the CBR has reduced credit in order to strengthen the exchange rate, well aware of money flowing out of the country if it tries to stimulate the economy in any way. But the consequence is that both consumption and investment are drying up, which is certain to cause the economy to stagnate and eventually shrink.

The CBR cannot solve problems it has not caused, and these problems are now becoming so severe that the CBR cannot even mitigate them. The causes are outside its control—namely, as earlier mentioned, crony capitalism, protectionism, the effect of sanctions, and the decline in oil and commodity prices.

Putting all these factors together, Russia appears likely to end up in a serious international financial squeeze in the second half of 2015. The Kremlin can do many things to avoid being cornered, but considering its economic policy in recent years reform of the Russian economy or a change in its attitude toward Ukraine appears unlikely.

The Russian Economy Is Heading toward Disaster

Crisis Puts Putinomics to the Test