Recently there have been numerous press stories on the difficulty that North Korea-based humanitarian aid groups and even diplomatic entities have had conducting cross-border financial transactions in the wake of the US Treasury designation of the Chosun Foreign Trade Bank (FTB), aka Mooyobank. As problematic as these situations are, off the radar screen something of greater financial significance is happening. As a presumably unintended consequence of the Treasury action, trading in North Korean debt has frozen, potentially granting the country roughly $3 billion in debt relief.

Back in the 1970s, North Korea borrowed heavily from Western banks and then defaulted. (To be clear, this does not refer to borrowing from the Soviet Union or other Eastern Bloc countries—these are commercial bank loans extended by syndicates involving more than 100 banks from 17 countries.) The loans were rescheduled in 1977, 1980, and 1984, but each time North Korea fell into default. In 1988, the London Club, representing the banks, took North Korea to court and obtained a judgment by the International Court of Arbitration, but even this did not prompt North Korea to settle. The principal and accumulated interest now stands at roughly $3 billion.

BNP subsequently issued three series of certificates which securitize the debt into transferable securities in the name of the NK Debt Corporation (Bloomberg ticker: NKDEBT). These securities trade at a large discount (currently around 5 cents on the dollar) though at the height of the famine, the price of the debt reached more than 50 cents (see Avoiding the Apocalypse Figure 3.5), as it was interpreted as an inverse indicator of regime survivability assuming that in case of a North Korean collapse, South Korea will pay off the debt. There might be challenges to this scenario on the basis of "odious debt" but that is not what the market seems to believe. 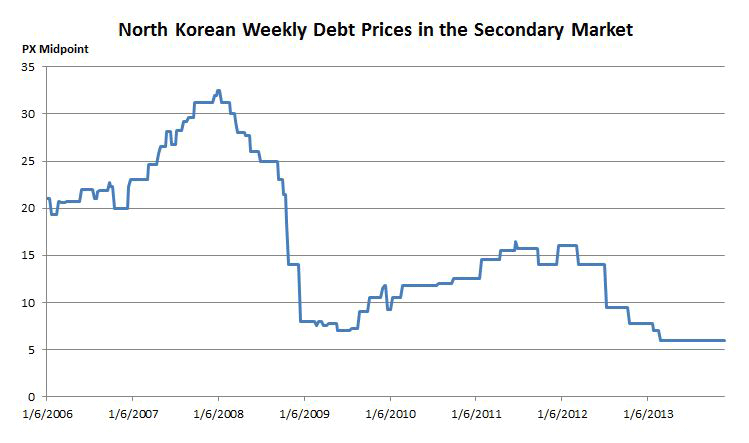 Enter the Treasury. When the FTB was designated as a sanctioned entity, the trading in the secondary market for these securities froze. Basically the action created legal uncertainty and both US and non-US market participants became concerned about the legal ramifications in the US of trading in these instruments.

It’s hard to discern much of an upside for the policy (if it is that). Stopping trading in the secondary market for defaulted loans has no effect on the provision of new finance. It does, however, disadvantage current and prospective holders of these instruments. A few years ago, paging through the annual report of the T Rowe Price Emerging Markets Debt Fund which I hold in a SEP-IRA, I noticed that it held some of this paper. You might want to check your own investment portfolios as well.

If trading in these securities is impaired for a significant length of time, the holders may just write off the debt, in effect granting North Korea $3 billion in debt relief, and signaling to other debtors that obligations can be extinguished by just ignoring legal proceedings and holding out for long enough.

Furthermore, by in effect taking the debt off the table, the US and its allies lose one card that they can play in an eventual political settlement with North Korea envisioned by proponents of normalization and/or a peace treaty.

OFAC could remedy this situation by granting a license clarifying the legality of trading in the defaulted loans as distinct from entering into contemporaneous transactions with the FTB. This was done previously in the case of Libya. But in the current political climate I wouldn’t hold my breath. Nevertheless, it would be a shame if the Treasury harmed investors (including some of the readers of this blog post, for example, who may hold these instruments through their pension funds as my T Rowe Price examples demonstrates) and in essence rewarded North Korean bad behavior just because doing the smart thing at first glance did not look like doing the tough thing.

It's not clear what BNP stands for.

The Strange Case of Steve Park