The East Asia Institute does some of the best polling work in South Korea, and we recently asked them to share their data on public opinion on the provision of aid to North Korea. For those with an interest in the topic, we did two posts on another survey on the question last year (here and here).

There are some small differences on how the question was asked over time; we note them below. But for purposes of simplicity we have aggregated responses into three categories: expand; stay the same; and decrease or stop altogether. A complication in interpreting the data, which was gathered irregularly from May 2002 through September 2011, is that it covers administrations with very different policies toward the North. From 2002 through early 2008, the question was asked against the baseline of the generous assistance provided by the late DJ and Roh Moo Hyun governments. The last five surveys (from February 2009 forward) were under the LMB government, during which aid has been cut dramatically as the second figure shows.

Nonetheless, the findings held some surprises that show the fragility of public support for engagement. Following the onset of the second nuclear crisis in late 2002—but even before then—and following the missile and nuclear tests of 2006, public support for decreasing or stopping aid altogether peaked at over 70 percent of respondents. Only at one brief point—and even then only marginally—did those favoring “stay the same” exceed those arguing aid should be cut, and that was in September 2005 when the Six Party Talks were momentarily back on track.

During the LMB government, the shape of support naturally shifts because the baseline is a dramatic reduction in aid. Nonetheless, “stay the same” only trumps “decrease or stop” in two surveys (February 2009 and January 2010), and the meaning of “stay the same” is ambiguous because aid had already been cut by the time of February 2009 survey; indeed “stay the same” could be interpreted as an indicator of skepticism. We then see the predictable effects of the Cheonan and Yeonpyong episodes in 2010, when those saying aid should be cut rises to over 50 percent despite the fact that little aid was on the table. Even though the tougher sentiment subsides somewhat in 2011, the share of respondents arguing that aid should be increased never climbs much over 20 percent of respondents.

Too much should not be read into any one poll question, but two things stand out to us. First, the core support for providing assistance to the North is volatile and highly dependent on what North Korea does. But second, that support is never particularly strong. During much of the Roh Moo Hyun presidency, large majorities favored scaling back assistance. And at the end of the LMB administration more than 75 percent believed that aid should “stay the same” or even be cut or stopped even though very little was on the table. The two presidential hopefuls have both promised greater engagement with North Korea. But regardless of who is elected it is highly unlikely that South Korean aid to the North will return to its engagement-era highs in the absence of a dramatic breakthrough in Pyongyang. 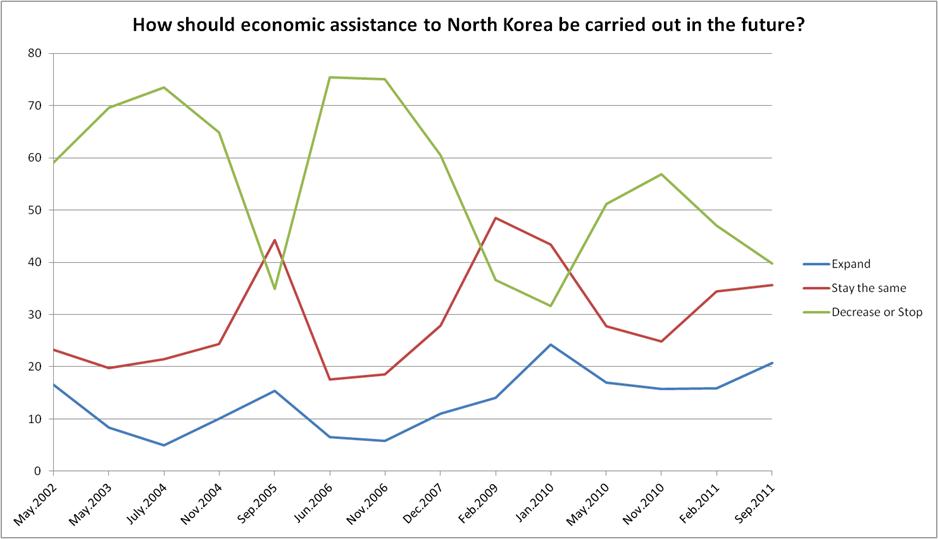 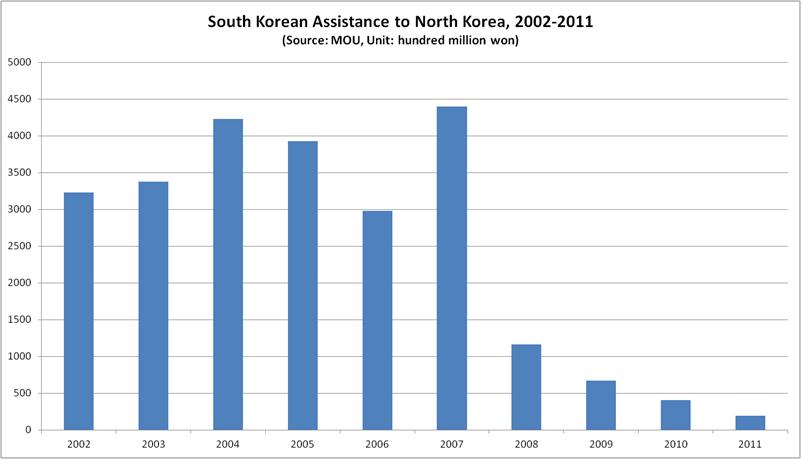