South Korean Aid to the North IV: The Evolution of the Inter-Korean Cooperation Fund, 1991-2015

In three previous posts, linked below, we have detailed South Korean aid to the North over the 1991-2015 period. In this final post we track the evolution of the Inter-Korean Cooperation Fund itself, including its sources of funding. The main takeaway is that contributions and deposits into the fund have exceeded outlays. Quite naturally this has also been true during periods when engagement is stalled. The result is that the size of the IKCF has grown steadily and now stands at just under $12 billion in 2014 dollars (with the small discrepancy from previous reports the result of currency movements). If Trustpolitik takes off following the recently-signed agreement, the IKCF will be the source of funding for the Park administration’s still-to-be-defined engagement and unification campaign.

The first figure below combines stocks and flows, showing yearly expenditures (green) and cumulative expenditures (purple); and yearly additions to the fund size (red) and cumulative fund size value (blue). On the expenditure side, the graph captures the increase in aid during the high engagement years of the late Kim Dae Jung presidency and the Roh Moo Hyun years. But contributions to the fund increased steadily during the late Roh Moo Hyun years and continued to be substantial under Lee Myung Bak in 2008 and 2010, despite the failure of his “unification tax” proposal, and also increased during the Park years. 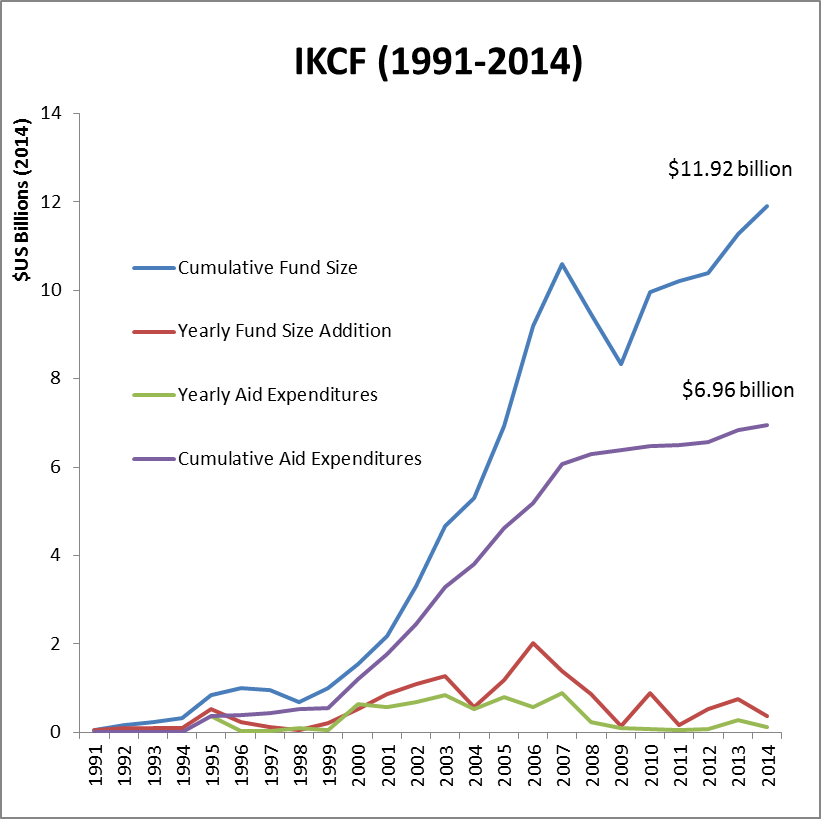 There is one small sleight of hand in the accounting and it has to do with loans to North Korea. (For the details, see the Korea Exim financial statements for the IKCF from 2010 to 2014, and the statement for 2014 in particular). The Fund carries a 1.374 trillion KRW (~1.3 billion USD using 2014 exchange rate) contribution to KEDO as a loan to the institution. Needless to say, this funding for the light-water reactors under the Agreed Framework is not going to be repaid. Similarly the IKCF carries $930.5 million in loans to North Korea, the vast majority for food with about $80 million for raw materials in a light industry cooperation initiative in the last year of the Roh Moo Hyun administration. Except for $2.4 million of the light industry initiative, none of this has been paid back; ironically, the borrower is identified on the IKCF books as none other than the Foreign Trade Bank of DPRK, which is currently under sanctions by the U.S. and even China. (A few previous food loan posts here, here, and here.)

Currently the IKCF law stipulates that the IKCF shall be funded from a) government or non-government (private) contributions, b) other public funds in the form of long-term loans, c) deposits from the Public Capital Management Fund, and d) operating profits from the IKCF (incurred interest, profit from fund management or from projects using the fund). The second graph below divides these sources of funding somewhat differently into legislated government contributions, non-government contributions (which have been minimal), deposits from the capital management fund, and operating profits. Government allocations voted by the National Assembly have accounted for 38% of total funding. This source dried up in the late Lee Myung Bak period as the president chose not to go to the National Assembly for this purpose. However, it picked up again under Park Geun Hye. 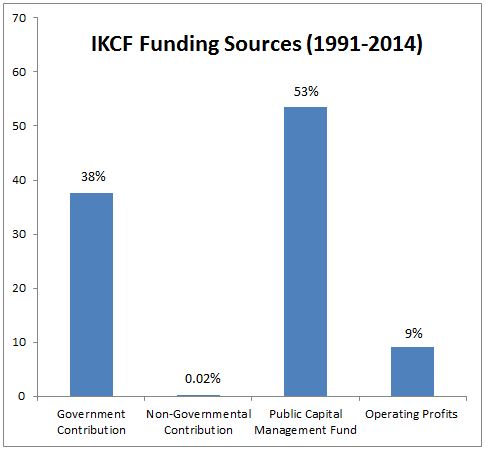 However, the largest source of financing of the IKCF is the deposits from the Public Capital Management Fund. Across a number of advanced industrial states, including the US, Britain and Japan, a number of fiscal entities are prohibited from accumulating surpluses themselves. They are therefore required to deposit these surpluses and they do so in other government entities. This source of intra-governmental funding accounts for over $6 billion (in 2014 dollars) of the total stock of the fund or 53%. To date, the entire fund has generated an operating profit, we assume by investing in Korean government paper. But these loans do not constitute assets of the IKCF but are in effect liabilities. They could be invested in projects yielding a return—for example loans to North Korea—but we have seen how such lending fares. If simply spent, they would presumably have to be replenished out of other sources, including government revenue.

If we measure the fund by anticipated costs of unification—which could be as high as a $1 trillion over a decade—it looks like peanuts. But if Kim Jong Un magically decided he wanted to pursue a more reformist course, then the fund could be deployed to a variety of projects that have been vetted in the past: an expansion of Kaesong; rehabilitation of the assets at Mt. Kumgang; an industrial park at Haeju, or all of the long-term projects that were on Lee Myung-bak’s and Park Geun Hye’s list. If signaled properly, the IKCF could even be an incentive for reform. But no one seems to be listening to that message in Pyongyang.