In a previous post, we reviewed data provided through the Inter-Korean Cooperation Fund on public aid to the North. We highlighted the political differences between administrations and the fact that the Park administration marks only a marginal departure from the Lee Myung Bak administration in overall approach. The one exception was the willingness to stare down the North during the closure of Kaesong by making insurance payments, thus signaling the willingness to shutter the complex altogether. 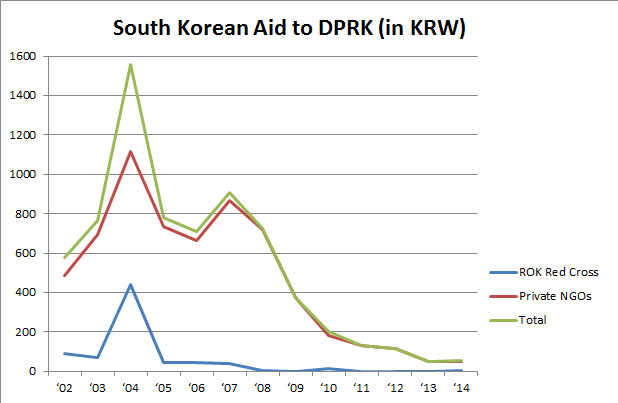 Here we take up one more detail: the share of Red Cross and purely private aid to the North. This data is provided by the MOU, and broken out annually here from 2002 through 2014 (the unit is the unwieldy 100 million KRW, but it suffices to tell our story). Interestingly, the story is surprisingly similar to the public story: private aid is high through 2002-2007 period—peaking in 2004—but starts to fall immediately after the inauguration of Lee Myung Bak in 2008, with Red Cross assistance dropping to virtually nothing.

But what is particularly striking is that private aid is even less under Park Geun Hye than under Lee Myung Bak. Two hypotheses present themselves: that the government continues to exercise restraint on the NGOs, which need to be registered with the government. But the other possible explanation—by no means implausible—is that private sector aid fatigue has also set in, with declining willingness to support the Young General.