In the course of doing some work for a book on sanctions and engagement with Korea, Jaesung Ryu helped us update the long history of the South’s aid to the North. We have the benefit of the fact that almost all of the public financing passes through the Inter-Korean Cooperation Fund (IKCF), which is managed by the Korea Ex-Im Bank.

There are two complications in interpreting the data. First, some share of the expenditure passing through the IKCF ends up in the hands of South Korean firms. This would include, for example, work down on the light water reactors (LWR) under the Agreed Framework and work contracted to South Korean firms with respect to infrastructure, such as the building of Kaesong and the North-South rail links. The MOU also puts together figures on private aid as well, which we take up in a second post. As always, caveat emptor! We have done our best to sort through an amazingly byzantine funding structure and we are happy to be corrected on particular details such as exactly how loans are accounted for in a funding model in which some are repaid even if concessional (such as those to South Korean companies) while others are clearly not repaid (those to North Korea covering some portion of humanitarian assistance).

The figure below puts the public aid story together beginning in 1994; there were small bits of aid in 1991-92 but we omit them here. The well-known story is the sharp partisan differences between administrations both in the level and approach to aid. Despite some food aid under Kim Young Sam, aid really takes off under the Kim Dae Jung administration. One surprisingly large component of that aid is an important holdover from the Agreed Framework: that South Korea was put on the hook for a large share of the funding for the light water reactors under the agreement. From 2000-2002 KEDO support is a surprisingly large share of total assistance; indeed after humanitarian assistance it is actually the largest spending category over the entire period covered here. Following the onset of the second nuclear crisis in the fall of 2002, however, KEDO unwound and this aid ended up in the form of rusting hulks at the LWR site, a reminder of the waste that politicized white elephant projects can engender. 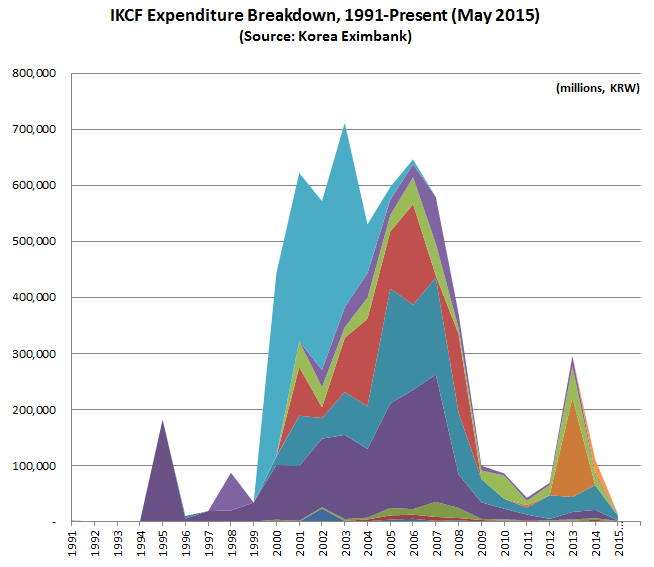 The Sunshine era aid peaks in 2006, dominated not only by food and fertilizer assistance—split between nominal loans and outright grants—but the “economic cooperation infrastructure support,” which included the stillborn rail links and assistance to the building of Kaesong and Kumgang.

Another interesting category is the “trade and economic cooperation loan” line. We have argued repeatedly that much North-South “commercial” trade is not fully commercial. This category seems to include loans to KIC companies (and possibly non-KIC trade companies prior to the May 24 sanctions as well as small firms that used to operate in Mt. Kumgang). This category also shows a small spike in 2013, when the KIC was shut down and companies sought emergency loans to offset their losses.

All aid commitments started to fall in 2008 with the Lee Myung Bak administration, but the reversal of humanitarian support is the most marked. We were reminded that the massive reversal took place from the outset of the LMB administration, well before the sinking of the Cheonan when sanctions were imposed on commercial trade and investment outside of Kaesong.

The Park administration appears to show a departure from the Lee Myung Bak era, but this is misleading as the big surge in expenditures from the fund in 2013 was in the form of insurance payments during the closure of Kaesong; as noted above, this was supplemented by ongoing loans.

The other small components of aid show only marginal increases, including the entry of a new instrument in the form of “unification policy grants.” This category has a complicated history but is worth highlighting as it could grow and shows a nominal change in thinking. At the end of the LMB period, the MOU sought to amend the existing IKCF laws to make funds available not only for inter-Korean cooperation projects but to “unification” related projects as well; thus the new category. That legislation got stuck in the National Assembly but “unification” projects have been undertaken under the "inter-Korean social and cultural exchange support" rubric. According to monthly records by Korea Ex-Im Bank (available from Jan 2014), items in this category shows expenditures related to the establishment of a "Center for the Unified Future of Korea" (official website here), a sub-organization under the Unification Ministry aimed towards unification education. The Center is not virtual, but includes a multi-purpose complex located near the southern part of the DMZ  in northern Gyeonggi Province. This category also includes some nominal commitments to a DMZ Peace Park.

But the larger point to be noted is that if Trustpolitik represents a departure with respect to aid, the data through mid-2015 is hard-pressed to show it.