On SOFAs II: Why We Need Data

In the last post, we focused on the legal issues of the SOFA debate.  In this post, we delve into the data side.

The underlying issue in the SOFA debate is whether justice is served by the arrangement. Koreans may feel aggrieved by the very fact that their courts are unable—or unwilling—to assert jurisdiction, and I am sympathetic to that concern. But the more damaging claim is that the US military uses the SOFA to shield American soldiers from legitimate prosecution.

First, a bit more on process. The UCMJ process is linked to the chain of command. Crimes such as larceny and simple assault—the cliché of soldiers getting into fights--may be handled by battalion or even company commanders through non-judicial punishment (NJP or as veterans will remember them Article 15’s). The overwhelming bulk of bad behavior is handled through this mechanism.

More serious crimes will go all the way up to the most senior commanders, in short, to the generals. For those cases which are American-on-American crimes or over which the US asserts jurisdiction on “performance of duty” grounds, these crimes would go to the general court-martial process. But it seems highly unlikely to us that top commanders are going to assert jurisdiction over other criminal cases involving Koreans simply in order to shield American soldiers.

But how can we be sure? Here is where we get to the issue of data. The US does not publish data on crimes committed by US military personal that trigger the SOFA. Although understandable, this leaves it to the imagination or the information provided by others; this is not a good idea.

A Korean NGO devoted to revising the SOFA and preventing and prosecuting crimes by GI’s maintains a website devoted to the issue. Recently, it filed a Korean Freedom of Information Act request with the Korean police that purports to list all offenses that involved the SOFA process from 2000 to 2010. These data are graphed below, because they constitute a visual representation of what Koreans see; even credible news sources like the KBS have picked up on this data. First, it appears to show a sharp increase in total crimes in recent years (Figure 1). But it also shows some undesirable trends in more serious crimes and sexual ones in particular (Figure 2). 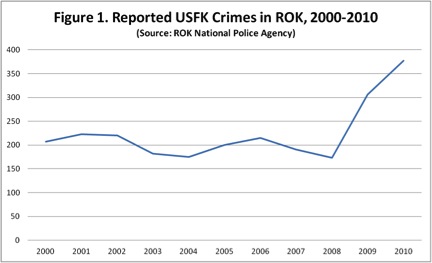 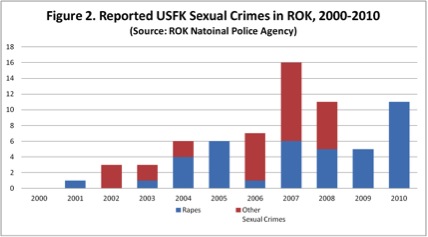 Obviously, this is not good. But to decide what it means, we need a helluva lot more information, starting with what the data even is. As it turns out, these data appear to be either total SOFA cases—in effect arrests--or prosecutions. But they do not reflect actual convictions. Other sources that appear to have inside information and look credible to us report much lower numbers. A sample of the findings:

But to really reach judgments about the effect of the SOFA we would need a number of other indicators:

You get the point. This is not easy to sort out.

IMHO, service men and women who commit serious crimes abroad are doing the country an incredible disservice; the effects are felt in political relations of great strategic significance.  But we should keep in mind that defendants have rights too, and the Senate specifically issued reservations when the NATO SOFA was passed in this regard. Should the Assistant Secretary of State be apologizing for crimes in which the guilt of the parties in question has not been legally established?

We think not; the LA Times piece cited above is correct to treat the rapes as “alleged.” As much as Mr. Campbell may want to get out in front of this issue, we should stand on principle. These soldiers are innocent until proven guilty, whether by a Korean court or as a result of a courts martial. If they are guilty, justice will be served.

But until we have more information, we cannot say whether justice is being served by the SOFA, the UCMJ system, or the Korean courts for that matter. Although it is unpleasant, our colleague Dan Pinkston at the International Crisis Group proposed that the military should publish—in one place—data on cases, jurisdiction, convictions and punishment. This fits with our concern that the information simply does not exist to make a reasoned judgment about the effectiveness of the SOFA system. In the absence of good data, more questionable data will drive the debate.