I do not know what motivated the North Koreans to repeatedly threaten the US over the last couple of months, but I do know what the effect has been: the threats greatly narrow the Obama Administration’s options going forward, especially with respect to any action that would require Congressional approval. It is particularly difficult for South Koreans, who have been hearing such threats for years, to comprehend how much damage the North Koreans have done in Washington. In this context, President Park’s visit to Washington was enormously important: if we ever get to the point where we can talk to the North Koreans, much less negotiate with them, President Park and South Korea will be critically important in providing political a Good Housekeeping Seal of Approval for the Obama Administration. The road to Pyongyang runs through Seoul.

Recent public opinion polling underscores the threat perceptions. A TNS poll conducted 26-27 April found that, rightly or wrongly, more than twice the percentage of Americans than South Koreans believe that North Korea is capable of striking them with a nuclear weapon, and less than one-third as many discount Kim Jong-un’s bluster.

"Do you think it’s possible for North Korea to launch a nuclear missile that could hit the nation (the United States/South Korea, or doesn’t have that ability?" 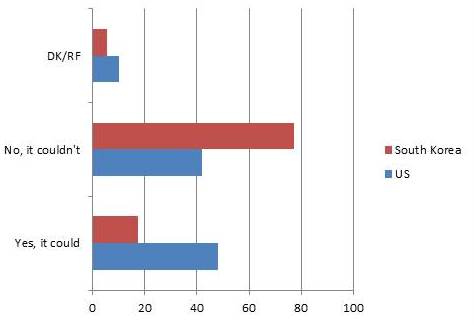 "Which of the following do you think better describes the new leader of North Korea, Kim Jong-un and his recent threats of a missile test?"

Opinions among the South Koreans vary with age and gender; males in their 20’s tend to take North Korea issues more seriously compared to other respondents.

Japanese feel most threatened: according to a Hankook Ilbo – Yomiuri Shimbun poll conducted in March, 47 percent of Japanese felt very threatened by North Korean nuclear threats, with another 34 percent feeling somewhat threatened. One can only wonder how the provocations over the past two months may have affected these perceptions.

Both the South Korean and Japanese publics see North Korea as the main threat, with substantial majorities viewing North Korea as threatening according to another recent poll conducted by the East Asia Institute. However, according to the Hankook Ilbo – Yomiuri Shimbun poll, the South Korea and Japanese publics differ on the best tactics to resolve the issue: 51 percent of South Koreans favor bilateral dialogue, while 53 percent of Japanese support pressure tactics such as economic sanctions. Indeed, only 4 percent of Japanese believe that economic cooperation is needed to resolve the issue.  But as concerned as the Japanese public is about the nuclear issue, they place a slightly greater value on resolving the abductee issue. 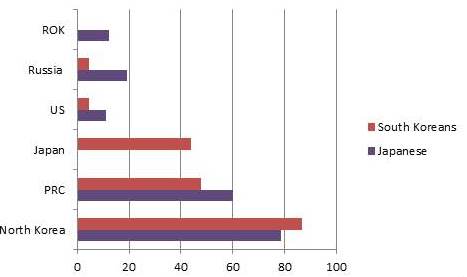 STTB: I Need Another Line of Work Edition