Obscure Dissertations We Would Like to Read: India-DPRK Relations (Part I)

A graduate student at UCSD, Akshay Bharadwaj, recently brought a handful of things to our attention on India-DPRK relations. It was enough to pique our curiosity, and attempt to roughly piece together the current relationship between the two countries. In today’s post, we look at India-DPRK commerce and trade in the last decade; tomorrow we assume the complementary lens of diplomatic and humanitarian relations.

India’s recent bilateral trade with North Korea has been eventful, if also somewhat puzzling. Back in 2010, a reporter for Forbes, Megha Baree, contacted us about a story she was writing  on what at the time was a rapid run-up of India-DPRK bilateral trade. Figures 1 and 2 below show what Ms. Baree saw, along with the subsequent fall-off. 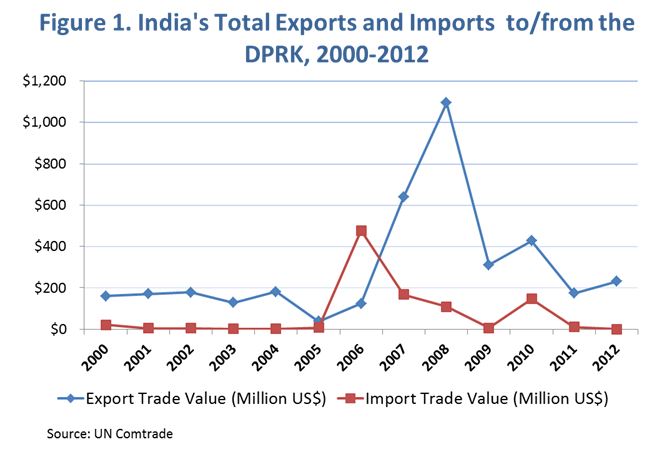 In the early-2000s, North Korea's imports from India hovered between $100-200 million, not a trivial figure at around 8 percent of total imports (in 2003-2004). Between 2006-2008, however, imports from India increased 786 percent to top $1 billion. As evidenced in Figure 2, the reason is the rapid growth in trade of fuel oils, petroleum products and distillates. Aviation spirit (jet fuel) in particular is responsible for much of the spike: In 2003, India was exporting only $5.5 million in aviation fuel, by 2008 this figure was above $750 million. 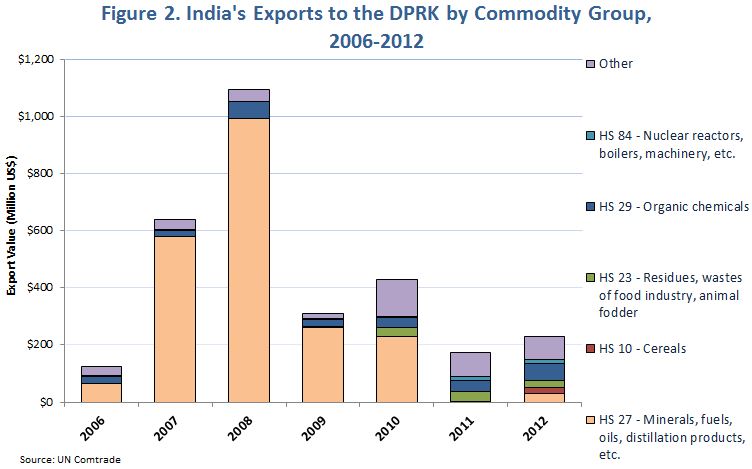 Ms. Baree explains this spike as a classic political economy tale. In the late-2000s Indian refining capacity got ahead of domestic demand, particularly at two large firms: Reliance Industries and the Essar Group. In addition, massive oil subsidies kept pump prices low. While state-owned refiners were compensated, private refiners had to turn to the international market and India became one of the largest exporters of refined fuels east of the Suez.  Iran and North Korea took advantage of the opportunity: not only does trade data show a marked increase in North Korea’s total fuel imports, but also huge trade diversion from its existing supplier China. In 2005, China supplied 83 percent of the DPRK’s jet fuel imports; in 2007 China had plunged to 3 percent, with the other 97 percent now coming from India. Competitive prices must have played a role in this big shift, which no doubt financed an increase in military inventories of fuel.

But things contracted as swiftly as they had grown, with fuel exports falling dramatically in 2009-10 and virtually disappearing by 2011-12. A variety of organic chemicals now make up a growing share of what looks like a more diversified portfolio of exports. Incidentally, China has now replaced India as the main supplier of petroleum and distillates, making up over 80 percent  of North Korea's imports in this category in 2011 and 2012.

But what explains this drop? India’s petroleum exports on a whole contracted significantly in 2009, but have since seen robust growth. Perhaps the difficulty of doing business with the DPRK became too much to bear. A slightly dated report (in .pdf) by the Indian Ministry of Foreign Affairs on trade relations with North Korea (updated through August 2012) notes “there are certain draw back (sic) for trade with DPRK such as limited foreign exchange with DPRK, non-availability of direct shipping and non-guarantee of payments through an established banking and insurance system.” The page goes on to note that the DPRK has a “keen interest” in importing consumer goods on a “deferred payment basis” and is engaged in some countertrade or barter of raw materials, but that “Indian exporters have not shown much enthusiasm in exploring this market.” We wonder if the oil exporters got burned, but we doubt it; exports of that magnitude must have been secured through some form of payment. Which raises the interesting question of exactly how North Korean trade and payments works. Was Pyongyang spending its hard currency Kaesong proceeds -- or even forex reserves -- in India during 2007-8?

While the trade spike is likely the result of a number of anomalous factors, it looks as if the current India-DPRK relationship is returning to historical norms: low level (but non-trivial) trade in a fairly diversified number of goods, and a sizable Korea-side export deficit. If any commentators have further insight into the rise, fall, and future trajectory of the India-DPRK trade relationship, we would love to hear it.