We are a long way from a changed nuclear posture, but Mr. Trump’s December 22 tweet on the issue obliges a review of the possible implications of a changing course.

(As this post was going to press, Mr. Trump, ostensibly responding to Kim Jong-un's New Year's speech, Tweeted, "North Korea just stated that it is in the final stages of developing a nuclear weapon capable of reaching parts of the U.S. It won't happen!" More on the New Year's Speech tomorrow...)

The conclusion: North Korea has already broken out and hardly needs excuses to maintain its nuclear and missile programs. But it has just been handed an additional one. As one astute commentary notes, the US sounds surprisingly like Kim Jong Un: “we will disarm when everyone disarms, and the interim if you want an arms race we are happy to oblige.” Significant complications could arise vis-à-vis China and particularly Russia, where nuclear forces have been checked by the New Start treaty, which enjoyed reasonable bipartisan support (71-26 in the Senate). And there are possible complications that could arise if the moratorium on testing were lifted. But by far the most significant question is what the nuclear Tweet might suggest about US behavior in a crisis on the peninsula, particularly if North Korea believes it is under imminent threat.

The trigger for the Tweet appears to have been comments—or more accurately, reporting on comments—made by Mr. Putin following a meeting of the Defense Ministry Board. He subsequently elaborated those comments in his annual end of year press conference the next day, also responding to Mr. Trump’s Tweet.

As Russian opposition to THAAD on the Korean peninsula has shown, Putin’s main concern is the development of US defensive capabilities. His comments following the Defense Ministry Board meeting noted that Russia’s triad was in good shape, with approximately 60 percent of “nuclear forces” (apparently measured by delivery system) having been modernized. But he also talked about “strengthening missile complexes that will be guaranteed to penetrate existing and future missile defense systems,” suggesting the possibility of further modernization. More detailed commentary by Defense Minister Sergei Shoigu expressed concern about the Obama administration’s modernization program, particularly in Europe. But Shoigu explicitly stated that Russia had no intention of being “dragged into an arms race,” and was simply sticking to the implementation of a broader conventional and nuclear force modernization program launched in 2012 (Steven Pifer at Brookings provides a non-alarmist overview).

By far the best discussion of the ambiguities in Mr. Trump’s Tweet are provided by Max Fisher at the New York Times. In particular, he parses the possible meanings of all of the key terms in Mr. Trump’s post, namely:

The meaning of the tweet was further complicated by a quite public back-and-forth among Trump and his staff, covered best by The Washington Post. Both Kellyanne Conway and Sean Spicer sought to emphasize the conditional: that the US did not intend to change policy if non-proliferation goals could be met, presumably including with respect to North Korea. At his year-end press conference, President Putin appeared to put a harmless face on the Tweet as well, also saying that it represented nothing new. Yet all of this was cast into question by an even more terse statement relayed through Morning Joe co-anchor Mika Brzezinski that Trump meant precisely what he said:

BRZEZINSKI (reporting on what Trump had said in an interview): "Let it be an arms race. We will outmatch them at every pass."

SCARBOROUGH: "And outlast them all."

BRZEZINSKI: "And outlast them all."

Despite the nuances, the key issues come down to four. The first is whether the Tweet implies an intention to abrogate the terms of the New Strategic Arms Reduction Treaty, signed in 2010, entering into force in 2011 and requiring compliance with its terms by 2018. The central limits of the New Start are simple (see the Arms Control Association for a crisp fact sheet) : 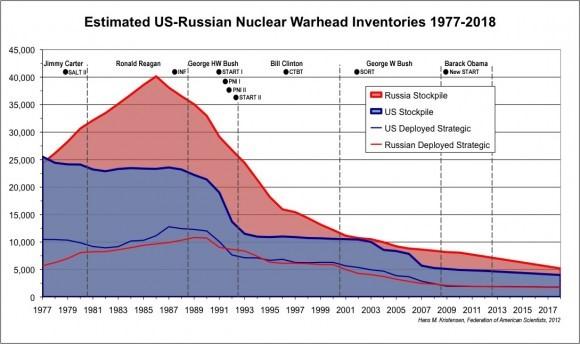 The treaty allows each party to withdraw if “extraordinary events related to the subject matter of this treaty have jeopardized its supreme interests,” with the treaty terminating three months from a notice of withdrawal. Were Mr. Trump to believe that the New START limits were constraining, then “expanding” the nuclear force could imply abrogation of the treaty. The Russians would respond as they saw fit, as would the Chinese who are not bound by any such treaty commitment.

The second issue is whether the Tweet and subsequent statements imply support for—or criticism of—the highly ambitious nuclear force modernization program that the Obama administration had already initiated (again, the Arms Control Association has clear overview). The force modernization program touches on all aspects of the triad: modernization of all three delivery systems; modernizing warheads themselves; modernizing production facilities; improving command and control; and undertaking important organizational changes with respect to the nuclear program. It is beyond the scope of this post to go into the contentious debates about the costs of this modernization effort, the strategic implications of new weapons and what parts of it might be retained or shed. The main point is that everything Trump has said—even his arms race comment—could fit within the scope of the Obama modernization effort. Or not. Mr. Trump’s comments could imply further tweaks to it that have yet to be unveiled. These, in turn, could be seen by Russia, China and North Korea as further shifting the nuclear balance and thus encouraging offsetting force developments in response.

A third issue is whether the Tweet might imply a change in the moratorium on testing that the United States has maintained unilaterally since 1992. (The US participated actively in the negotiation of the Comprehensive Test Ban Treaty [1996] and was the first to sign it, but the Senate failed to ratify it in 1999; the moratorium has nonetheless been maintained ever since). James Glanz at the New York Times rounds up a diverse set of commentary and considering how incoming Secretary of Energy Rick Perry might view the issue.

The fourth issue raised by Mr. Trump’s tweet—and the most important for the Korean peninsula—is the effect of such communications during crises (see comments by Jeff Lewis and Bruce Blair at the Washington Post here). North Korean nuclear doctrine is far from clear, but there is risk that it could move or is already moving toward a hair-trigger approach to threats and particularly threats to the leadership. In a  thoughtful treatment at the Washington Quarterly, Vipin Narang summarizes his recent book on Nuclear Strategy in the Modern Age noting that emerging nuclear powers have three options with result to doctrine. A “catalytic” strategy is designed to trigger intervention on the part of a protector, in North Korea’s case clearly China. North Korea’s comments appear to me to conform most closely to an assured retaliation approach, threatening certain response after sustaining damage. But a wrinkle is that such a response requires a second-strike capability which North Korea may not have.

If China’s protection is uncertain and the survivability of forces is uncertain, North Korea could be driven to the third approach: asymmetric escalation or first use not only against conventional attack but against threats that appear imminent. Re-enter the problems of “policy by Twitter.” It is easy to imagine a crisis on the peninsula triggered by a low-level North Korean provocation designed to “fly below the radar” and avoid a retaliatory response. But a threatening Tweet by the US president suggests imminent action—including conventional action—against the country’s nuclear forces or wide-ranging objectives such as regime change or the elimination of the leadership. How will the Kim regime respond? Crisis stability is what we should be worrying about.