As the debate about sanctions kicks into high gear both at the UN and in Washington, two questions arise: exactly how much North Korea trades and with whom, and have recent changes in the North Korean, Chinese and global economies made them more or less vulnerable. Today we take up the first issue; later this week we will examine the second.

Because North Korea does not publish its own trade statistics, the standard response is to impute them through so-called mirror statistics of North Korea’s partners, some of which—most notably Iran—are themselves missing. But the real action is with China, and over the last several months, a number of analysts, including Nick Eberstadt (AEI), Mark Manyin (Congressional Research Service) and Curtis Melvin (North Korea Economy Watch) have noted a large anomaly in the China data. Databases and reports that work directly from China’s customs statistics—Global Trade Atlas, Comtrade, KDI—reported almost $500 million less in trade with China than the figures released by KOTRA in its annual report. What is going on?

It appears that Manyin has uncovered the problem: that Chinese customs statistics have reported no oil exports from China to North Korea in 2014 or 2015, while KOTRA has rightly corrected for this omission. Buried in a footnote in KOTRA’s 2014 report (p. 18) is the following explanation, with which we largely agree (translation by CRS staff):

“It is estimated that oil import is similar to previous years – approximately 500,000 tons of oil, which is equivalent to $ 500 million USD. The estimation is derived from a number of factors. Although statistics from the Chinese customs’ indicate a “0” for crude oil import, there is a lack of evidence indicating the suspension of oil supply such as a significant slowdown on the operation of oil manufacturing facilities. There has been little changes to statistics on other oil-related imports, and most importantly, the Ponghwa Chemical Factory, the major oil refinery that processes Chinese crude oil, has been fully operational, indicating that there has been little changes to (North Korea’s) oil imports.”

Although the general point is clearly correct, the exact amounts to impute to get a more plausible estimate of trade are a little more uncertain. To begin with, it is possible that China has stopped reporting oil exports because it is simply embarrassing to show how dependent North Korea in fact is on China. But it could also be playing with these exports at the margin. For 2014 KOTRA estimated a round 500,000 tons, which is 14% less than the 578,000 tons the DPRK imported in 2013. KOTRA lists the 2014 average price per ton of oil at $945.10 per ton, which if their own 500,000 ton quantity estimate is right, should put the estimated total price of imported oil from China at $473 million, not $500 million; if the DPRK were spending $500 million, it should be importing about 5% more oil.  Due to the collapse of oil prices in 2015, even larger discrepancies are possible for that year. We will take up the financial implications of this issue in a later post as well.

So what is the larger picture here? The figures below provide some informed speculation about patterns of trade between North Korea and its two main trading partners. We kept quantities of oil constant but factored in the substantially reduced price of crude for 2015. We don’t have data yet for North Korea’s 2015 trade with other countries but we projected it based on the fact that South Korea and China have accounted for an average of 91% of total DPRK trade over the last five years. One weakness is that we don’t take into account falling prices for North Korea’s exports; again, we will examine these possible terms of trade effects in a subsequent post.

The results are outlined in the three figures below, starting with the absolute values and shares of the DPRK's trade with China and South Korea. Our estimates show that trade with China has dropped some, both in absolute value and as a share. All graphs include imputed oil estimates for 2014 and 2015 when China stopped reporting crude oil exports to North Korea. We use Chinese Customs data, keep the quantity of oil constant applying the KOTRA 500,000 tons estimate for 2014 and 2015, but reducing the total value in 2015 based on the percentage decrease in oil price. 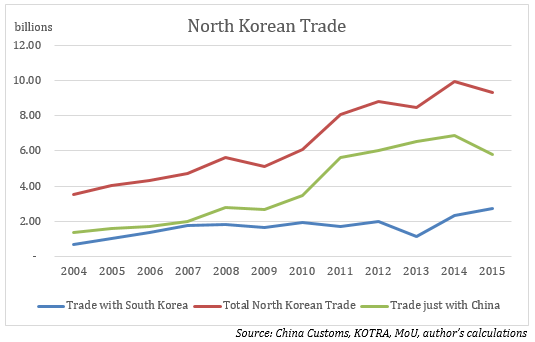 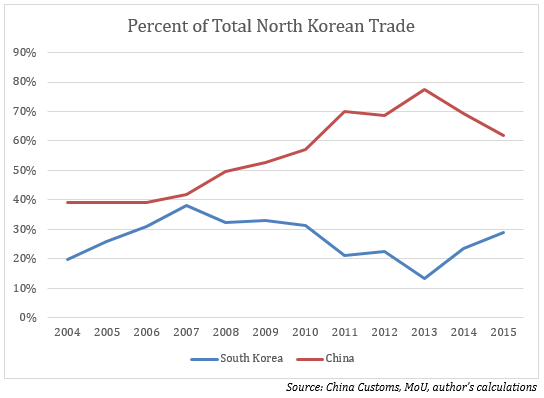 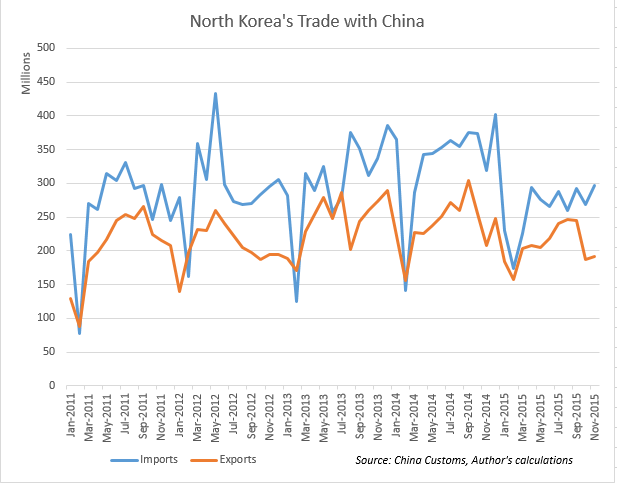 What does this say about the sanctions debate? First, if we assume that oil imports in 2014 and 2015 were roughly the same as in the past, then two-way trade has fallen some but not much; China would still account for 60% of the DPRK's trade. But unless North Korea has magically diversified its trade in ways we have not seen, the perverse effect of this small fall off in the China-DPRK share is that North-South trade is up not only in absolute terms—Kaesong trade in 2015 was up 20 percent—but that South Korea’s share of total DPRK trade is up even more sharply, and could now account for as much as 30% of total trade. Given that this is all with Kaesong, debate is now starting in Seoul as to whether they should shut the complex down. And finally—to end on a political note—what is China doing zeroing out oil trade that is quite obviously continuing? That question is arguably the most important one of all. Is China covering up its support, or covering up pressure? We side with the first theory.