We have all seen the satellite images of the Korean peninsula, with a lit-up South and nothing more than a small blip of light around Pyongyang. In fact this picture has been changing as can been in the 2012 composite image reproduced below; other cities and even smaller towns are visible. Therein lies a new way of tracking economic activity in North Korea that has been used elsewhere with interesting effect (see for example Small, Pozzi and Elvidge and Henderson and Weil): measuring changes in luminosity over time. In this post and several that follow, we take a look at some trends since 1992, beginning with the regional story.

First, a few words about the data (a more technical note is appended below). In this analysis, we use the DMSP-OLS Stable Lights Dataset covering 1992-2012. In effect, this data set generates a single composite image of the country for each year and can be used as a proxy for economic activity across different parts of the country. The basic units of observation are the 186 local administrative areas defined by the Global Administrative Areas dataset.

The images remove background noise and ephemeral lights emitted from gas flares or fires, but there is one major drawback: the six satellite sensors are not sufficiently inter-calibrated to make direct year-to-year comparisons. What it is possible to do, however is to compare the shares of total light emanating from different jurisdictions (again, from local administrative areas up to regions). Put differently, we can’t say what the absolute growth of luminosity is in Pyongyang. But we can track changes in Pyongyang’s share of all light emanating from the country. As a result, the data is quite useful for showing changes in the spatial distribution of economic activity.

We begin in this post by looking at larger regional aggregations. We divide the country into five regions:

The figure below shows the three-year moving average of each region’s share of total national light from 1996 to 2011. The graph on the right omits Pyongyang, allowing us to see more clearly what is going on in the provinces. 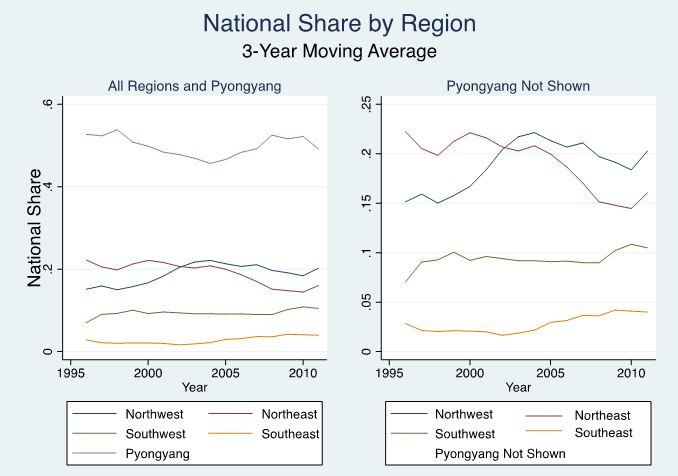 Three important trends are visible. First, Pyongyang’s share declined from its 1996-97 peak—in the immediate aftermath of the famine--until the early-2000s. A possible interpretation: Pyongyang had been protected during the famine, but once it ended other areas began to recover. From 2003, however, the capital city’s share rebounded to mid-90s levels before turning down slightly in 2011.

Second, the biggest gainer in the immediate aftermath of the famine was the Northwest. The decline in Pyongyang’s relative share was matched almost exactly by strong relative growth in the Northwest region. The entirety of the Pyongyang-Sinuiju corridor, which connects the capital with China’s northeastern provinces, falls within this region. This uptick in luminosity corresponds with an inflection in China-DPRK trade that we have documented in earlier posts (see here, here, and here for some recent examples). If major infrastructure investments in this corridor continue, such as an express railway from Kaesong to Sinuiju, this momentum of this growth corridor could continue.

Third, the biggest relative loser in this story—particularly apparent when we omit Pyongyang—is the Northeast region. Not only was the region hit hardest by the famine but it has fared less well than the other regions since that time too. It is possible that this relative decline is overstated by the difficulty of capturing developments along the borders because of the technical problem of “blooming” across boundaries. Nonetheless, the division between the west and east coasts of the country is apparent.

Finally, although it is too early to call it a trend, it is interesting that Pyongyang’s share drops slightly in 2011 and that all other areas see increases, the Southeast more gradually, the Northeast and Northwest more sharply. A possible interpretation is that the economy has rebounded at least somewhat during the last three years.

In future posts, we will look more closely at developments across major cities and rural-urban differences over time.

I work around this problem by measuring the ratio of a geographic area’s lights to the total national lights in a given year. This relative measure allows for reliable comparisons between different areas within North Korea, as the systematic measurement bias in a given sensor is assumed to apply equally to different areas within the country in a given year. Thus, this ratio is a valid distributional measure, but does not allow for assessments of the actual luminosity levels. Those interested in further work in this vein are strongly encouraged to make use of the inter-calibration methods described in Baugh et al (2009) and Elvidge et al (2009).

In addition to calibration issues, a second problem for luminosity analysis is light ‘blooming’. The outward dispersion of light causes grid cells adjacent to a major source of light to appear lit when in fact there is no light coming from that point in space. For example, the Pacific Ocean immediately west of Los Angeles appears to be abuzz with economic activity.

This is a considerable problem for North Korea, as one can see with the naked eye in the 2012 Stable Lights image above. Light from the relatively much brighter Chinese and South Korean border areas “bloom” into North Korea, particularly along the DMZ where the South Korean military has installed intense floodlights pointed directly at North Korea. I control for this problem with statistical methods established by Pinkovskiy (2013). Light of foreign origin is assumed to be a function of the light density in the neighboring foreign area. The North Korean light density within 10 kilometers of a border is deducted by the product of neighboring foreign light density and a coefficient of 0.23, the empirical rate of light dispersion. These methods provide reasonable controls, on average, but do not control for the varying rate of light dispersion due to the nature of the foreign light. Thus, observations bordering the DMZ appear to be overestimated because of the high-intensity South Korean military lights but urban observations in the area bordering the Chinese city of Dandong (Sinuiju in particular) appear to have been over-penalized and are thus underestimated. This point is critical for interpretation of results because the Northwest is found to have shown strong relative growth over the period, despite the fact that Sinuiju’s light output has been underestimated. Thus, results for the Northwest’s relative growth should be considered conservative estimates.

A third limitation on using this data for North Korea has to do with the absence of corresponding data on population or economic activity. Lights data is often used as a proxy for GDP or total economic activity in a given subnational jurisdiction. Growth in emitted lights suggests increased economic activity, but it is not clear if this increase is due to per capita growth or a population increase. In areas with reasonable economic data, we can use luminosity to inform population estimates; vice versa for areas with quality population data but poor economic data. In the case of North Korea, we have two unknown variables: reliable regional data on economic and population growth are both nonexistent. Strong relative growth should not be construed as evidence that incomes have grown; it may simply reflect differential population growth. But as a practical matter, we suspect this is not consequential, particularly given lack of significant geographical mobility in the country.