In an earlier post, we reported on an initial effort to use luminosity to measure spatial patterns of economic activity in North Korea. As it turns out, we are not alone; see the interesting paper by Yong Suk Lee at Williams on the geographically uneven effects of sanctions.

Because of the way the satellite data is collected, it does not permit us to measure the absolute changes in luminosity over time (see the technical note appended below). But it does permit comparisons over time in the shares of total light emanating from different jurisdictions. In the last post we looked at large regional agglomerations and tracked the dominance of Pyongyang—accounting for roughly 50 percent of all visible light emanating from the country—and the relative changes of other regions. The most striking finding was the growth of the Northwest—the area encompassing the Pyongyang-Sinuiju corridor—and the relative decline of the East Coast of the country.

In this post, we explore some comparisons across major cities, averaging over the period from 2000-2011; in the next post we look at urban and rural shares over time.

In the first figure below we look at the share of light emitted by five major cities in the country: in descending order by population reported in the 2008 census they are Pyongyang (3.25 million), Chongjin (668,000), Nampo (367,000), Wonsan (363,000) and Rason (197,000). Two other major cities, Sinuiju and Kaesong, are excluded for reasons explained in the Technical Notes. Pyongyang’s dominance is again clear. Pyongyang is roughly half of the country’s light output but only 14% of its population. 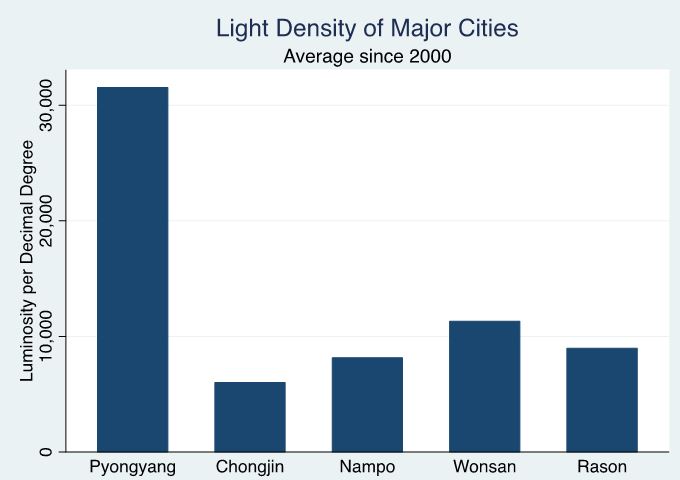 As we explain in the technical note below, it is risky to make any inferences about per capita light emissions because population data over time is so untrustworthy and luminosity tends to underestimate vertical growth. However, if we violate our own injunction and average over the entire time period, we can calculate some order of magnitude differences in per capita urban luminosity across cities drawing on the census data cited above; this exercise is reported in the second graph below. We assume that the population shares of the five major cities are constant during that period, a somewhat plausible assumption given the lack of geographic mobility. 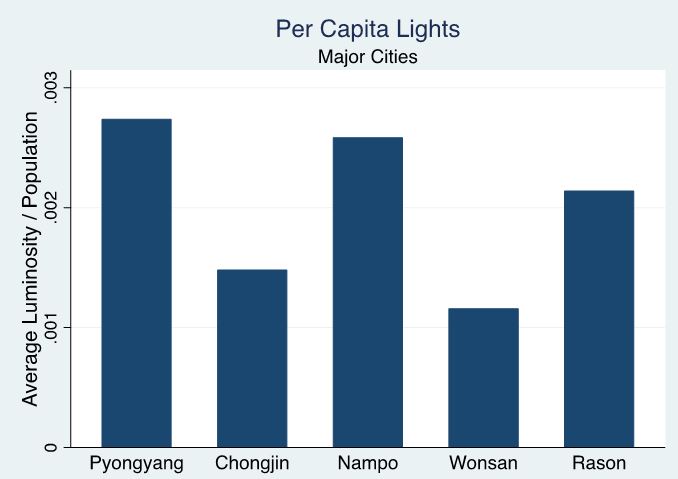 The results are somewhat surprising. Pyongyang’s per capita share of lights is not that much higher than Nampo’s and Rason is a close third; by contrast, Chongjin and Wonsan show about half the per capita luminosity of the other three cities.

One hypothesis: the geography of globalization matters. Rason’s takeoff is relatively recent, but it has nonetheless been at the leading edge of the country’s halting efforts to open. Nampo is the nautical arm of the Pyongyang-Sinuiju corridor discussed in our last post. According to a 2006 paper by Jo and Ceasar its share of North Korea’s total maritime trade increased from 37% in 1994 to 59% in 2004, partly a result of the collapse of the Soviet/Russian trade during the early 1990s. Chongjin and Wonsan, as well as Hamheung, are ports as well but on the disadvantaged east coast. Such inequalities are not necessarily a bad thing if they reflect a gradual process of opening in which the gains accruing to “first movers” subsequently spreads. But to date, that does not appear to be happening.

I work around this problem by measuring the ratio of a geographic area’s lights to the total national lights in a given year. This relative measure allows for reliable comparisons between different areas within North Korea, as the systematic measurement bias in a given sensor is assumed to apply equally to different areas within the country in a given year. Thus, this ratio is a valid distributional measure, but does not allow for assessments of the actual luminosity levels. Those interested in further work in this vein are strongly encouraged to make use of the inter-calibration methods described in Baugh et al (2009) and applied in Henderson et al (2012).

In addition to calibration issues, a second problem for luminosity analysis is light ‘blooming.’ The outward dispersion of light causes grid cells adjacent to a major source of light to appear lit when in fact there is no light coming from that point in space. For example, the Pacific Ocean immediately west of Los Angeles appears to be abuzz with economic activity.

This is a considerable problem for North Korea, as one can see with the naked eye in the 2012 Stable Lights image below. Light from the relatively much brighter Chinese and South Korean border areas “bloom” into North Korea, particularly along the DMZ where the South Korean military has installed intense floodlights pointed directly at North Korea. I control for this problem with statistical methods established by Pinkovskiy (2013). Light of foreign origin is assumed to be a function of the light density in the neighboring foreign area. The North Korean light density within 10 kilometers of a border is deducted by the product of neighboring foreign light density and a coefficient of 0.23, the empirical rate of light dispersion. These methods provide reasonable controls, on average, but do not control for the varying rate of light dispersion due to the nature of the foreign light. Thus, observations bordering the DMZ appear to be overestimated because of the high-intensity South Korean military lights but urban observations in the area bordering the Chinese city of Dandong (Sinuiju in particular) appear to have been over-penalized and are thus underestimated. Because of this issue, we exclude Sinuiju and Kaesong from our cities analysis.

A third limitation on using this data for North Korea has to do with the absence of corresponding data on population or economic activity. Lights data is often used as a proxy for GDP or total economic activity in a given subnational jurisdiction. Growth in emitted lights suggests increased economic activity, but it is not clear if this increase is due to per capita growth or a population increase. In areas with reasonable economic data, we can use luminosity to inform population estimates; vice versa for areas with quality population data but poor economic data. In the case of North Korea, we have two unknown variables: reliable regional data on economic and population growth are both nonexistent. Strong relative growth should not be construed as evidence that incomes have grown; it may simply reflect differential population growth. But as a practical matter, we suspect this is not consequential, particularly given lack of significant geographical mobility in the country

Additional Technical Note on the Lights Per Capita Measure

Measuring per capita luminosity can be problematic because the sensors tend to underestimate the effects of vertical growth. For example, the luminosity per capita of Singapore would underestimate its GDP per capita due to the population’s concentration in high-rise apartment buildings. For the sake of a rough comparison in the North Korean context, this is not as significant an issue though we expect this measure to underestimate the economic activity within Pyongyang, as can be seen by comparing the Per Capita Lights graph to the Light Density graph.