Last week, I spoke at an interesting conference at Catholic University organized by Andrew Yeo and Danielle Chubb (Deakin University, Australia) on North Korean human rights. Among the commenters was Celeste Arrington (George Washington). She has a great new book out this year from Cornell on how governments and activists in South Korea and Japan have responded to people who have suffered due to state wrongdoing or negligence; among her cases is a comparison of the response to North Korean abductions in the two countries.

In the book, she has a figure showing the sustained interest among the Japanese public in the abduction issue; at the conference she provided an update and the slide is shown below. The data is from a general survey of attitudes toward foreign policy that the Cabinet Office has collected since 1975 (in 2016 they provide an English summary in .pdf). The question asks "if there are things that interest/concern you about North Korea, which of the following would they be?" Multiple responses are allowed, and the response categories have morphed over the years so not all possible responses are shown.

But the figure is nonetheless interesting for showing the continuing power of the abduction narrative. The nuclear issue drew more responses in 2015, and concern about the abductions slipped slightly. But abductions still trump both the nuclear and missile questions—next in frequency—and issues related to the broader political system. Two other interesting shifts worth noting are the secular decline in interest in normalization of relations and a bump up in concern about escapees and refugees since 2008. 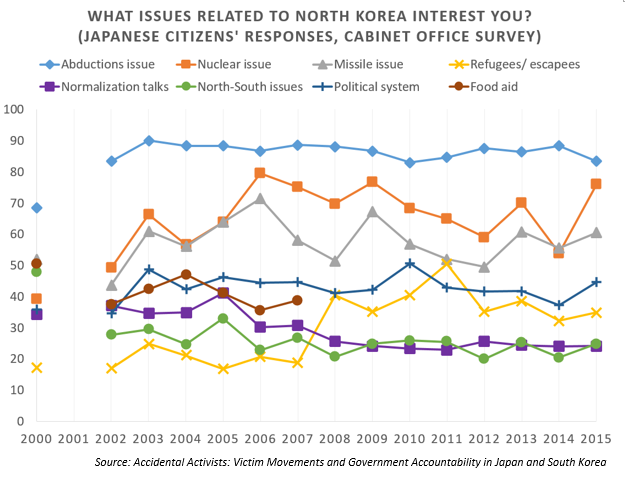 A Security and Peace Mechanism for Northeast Asia: The Economic Dimension

Slave to the Blog: Implementing the Commission of Inquiry Edition