In recent weeks, North Korea watchers have been entertained by breathless headlines such as “N.Korean textile exports to China surge in 2014,” “Massive Increase in North Korea’s Coal Imports from China,” and my favorite, “North Korea exporting 35 percent more food to China.” I don’t doubt that the reports accurately reflect recent Chinese customs data; the question is what do they mean?

The obvious starting point is that, by its standards, North Korea has a robust trade relationship with China. But in significant part that trade consists of exchange in natural resource products. David Ricardo would be fairly comfortable in the world of China-North Korea trade. And one aspect of that Ricardian trade is the relative absence in two-way trade in differentiated products. So North Korea mainly exports coal to China, and mainly imports food, or at least bulk grains. So, when I read the headline of a big percentage increase in exports in the “wrong” direction, I immediately think “off a minuscule base.” And indeed, when one presses further, that seems to be the case. Yes, North Korea is importing coal from China but the volumes are not large: with the “massive increase” the August bill came to $5 million—more than my bank balance, but less than half the operating budget of a small Washington think-tank. So maybe this uptick of coal that is apparently used for power generation signals either the growth of economic activity in North Korea or source-switching away from oil-fueled power generation in response to the alleged oil embargo. I’ll leave it to people with more time on their hands than I have to sort this out. 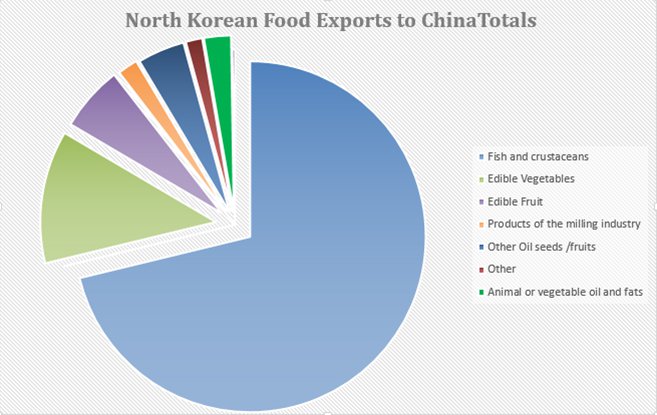 So much for coal. What about food? Well, North Korea has always exported some food products to China, mostly seafood products and some niche items like ginseng. And indeed, that is what the NK News story shows: the bulk of North Korea’s food exports to China are fish and crustaceans. And in the past, North Korea’s exports of these products have been interpreted as signals of how badly the regime needs foreign exchange and when prices are high North Korean fishermen are encouraged to test the Northern Limit Line. So an increasingly efficient fishing fleet, high prices, or desperation? You tell me.

And yes, North Korea apparently exports a minor amount of rice to China as well: man does bites dog it seems. But the two-way trade in rice presumably reflects market forces and incentives. If that is what is going on, then it could be adduced as additional implicit evidence that internal prices for rice have stabilized (why export to China if the price at home is high and rising). Or it could be that that North Korea still has not resolved issues with regulation of the internal grain trade and infrastructure problems: one sells the grain in China because one either cannot sell it at home, or the infrastructure is so bad one cannot get it to the markets where the high income consumers shop. Ireland, after all, exported food to Britain during the famine. But perhaps the most arresting part of Leo Byrne’s story is the throwaway line about the value of rice being exported to China exceeding value of aid provided by the WFP. Maybe Kevin can figure out all this when I am out of town next week.

Which brings me to textiles, which actually may be the most interesting of the three stories. South Korea long conducted “processing on commission”, or POC trade, with North Korea wherein a South Korean garment firm would contract with a North Korean factory (often through a Chinese office or middleman) to produce clothing assembled from South Korea-supplied inputs. In other words, the South Korean firm would provide cloth, thread, buttons etc. via China which a North Korean enterprise would assemble into finished products. The South Korean firm would then bring the products out of North Korea via China and sell them in the China, South Korea, or some third country market. This practice used to sew a lot of confusion in Chinese trade statistics, since sometimes this exchange was recorded as both a Chinese export of textiles to North Korea and a Chinese import of finished garments.

The Yonhap story indicates that Chinese producers have moved into the POC void created when the post-Cheonan measures enacted by South Korea effectively killed all bilateral trade except via the Kaesong Industrial Complex. The Chinese stepping into the vacuum is a plausible story. But since Chinese middlemen or at least the Chinese offices of South Korean firms were already intermediating this trade, I wonder if the headline really reflects a change in behavior or simply a repackaging of the trade to keep it under the radar and out of the clutches of South Korean sanctions. After all, if this were a profitable trade, wouldn’t it be in the interests of all parties to keep it going? And where are the finished garments being sold? In the survey that Steph Haggard and I did a few years back, we observed that Chinese and South Korean firms operating in North Korea had somewhat different business strategies: the South Koreans viewed North Korea as an export platform (hence all the sturm und drang about getting duty-free treatment under the KORUS agreement for products produced at KIC) whereas the Chinese tended to sell into the North Korean market itself.

Wonder how one says "nine pound hammer" in Korean?

I prefer to see this as quality-control issues with China's food and agricultural products, as a result of soil pollution, or "by-product of economic advancements with Chinese characteristics". It's so bad, they now have to import rice from North Korea. Perfect chance for North Korea to make $$$ though.

Whilst my stay in North Korea in September this year, people were in a festive mood, partely because they had a very soft rainy season in July/August with no flooding and no destruction of fields. NK is expecting an excellent harvest with maybe 6 Million tons (70 % rice and 30 % maize). Treshing is underway.
By the way: All reporting, rice is preserved for the elite is bullsh...