The National Liberation Day speech each August 15 bears a family resemblance to the State of the Union. Lee Myung Bak’s most recent is thus worth parsing for the administration’s intent with respect to possible talks.

The first thing to note is the overwhelming emphasis on economic policy and job creation; how South Korea will position itself in the world economy. North Korea is a virtual afterthought, and there is barely as much devoted to North-South relations as there is to calming relations with Japan. There is also much less on the topic—only 130 words--than in the 2008 (287 words), 2009 (347 words), or 2010 (431 words) speeches. Earlier addresses made explicit mention of the nuclear question; this year's is silent on it.

The section devoted to unification is worth quoting in full:

“We have yet to resolve the greatest issue in modern Korean history. That is the issue of national reunification. Reunification would be the perfection of national liberation.

Over the past 60 years, the South and North have lived in conflict. Now is the time to overcome it and open up an age of peace and cooperation.

To this end, it is incumbent for the two sides to build up mutual trust with responsible deeds and a sincere stance. Nothing can be accomplished through provocations. The two sides should bring about peace based on mutual trust, pursuing common prosperity through bilateral cooperation.

Humanitarian assistance for children in the North will continue. Humanitarian support to help it recover from natural disasters will also be continuously carried out.”

On the one hand, this could well be seen as same-old, same-old. North Korea is called on to show its sincerity and to halt provocations.

On the other hand, the nuclear question is clearly downplayed. Moreover, the idea of “common prosperity, through bilateral cooperation” as well as the explicit mention of aid, however small, could carry a signal on the part of the Lee administration to also send a signal. In contrast to the past, it is South Korea that appears like the suitor; according to Daily NK, the MOU reports that it is pushing ahead with its plans for humanitarian assistance despite the fact that the North Koreans have not responded to the offer. Foreign Minister Kim Sung-hwan subsequently confirmed the change in course in an appearance before a National Assembly committee.

The figure below—put together from MOU data--shows trends in public and private assistance since 2001—the year following the first summit—with public assistance broken out between food and non-food aid. (The “food loan” appellation is an ongoing fiction that food assistance was paid for through loans that will ultimately be repaid).

The collapse in public assistance, and food aid in particular, is well-known. But so is the decline in private assistance, despite the fact that it still dominates public aid. MOU has clamped down on NGO activities and limited its support them. The gesture on humanitarian and flood-related assistance is likely to be small and may put the onus on private groups. Nonetheless, a gesture? 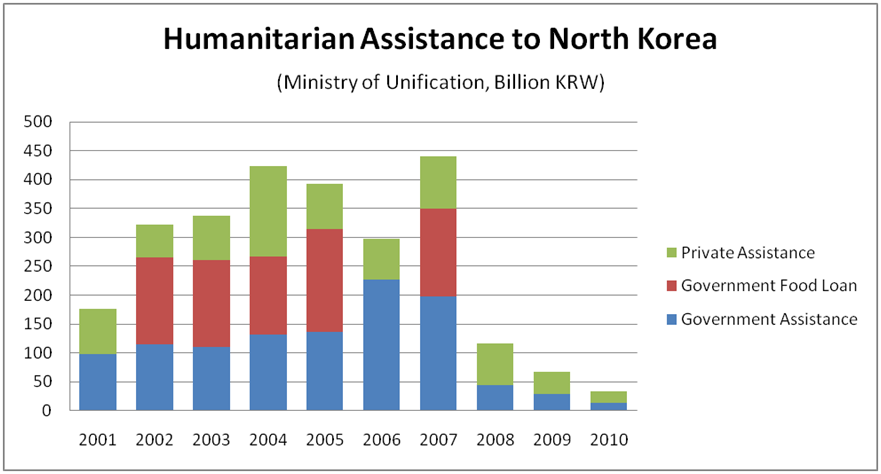