Last week, we ran a post on how North Korean threats were used by Prime Minister Abe to justify his re-interpretation of the Article IX constraints on Japan’s pursuit of collective self-defense (CSD). Today, we probe the domestic politics of the Abe government’s reinterpretation by looking at public opinion data. Although there is some variation in polling results, the Japanese public remains ambivalent at best about CSD. This fact will place limits on what the government can do as the reinterpretation works through the Diet and is translated into law in the months ahead.

Public Opinion Prior to the Reinterpretation

The debate over constitutional revision and the interpretation of Article IX has been present since the inception of Japan’s postwar Constitution. Although general public sentiment has consistently opposed making any changes to the “peace clause”, a 2013 report (.pdf) by the Pew Research Center suggests that opposition to constitutional revision has eroded somewhat over recent years (a chart taken directly from the report is reproduced below). While these results are not inconsistent with other surveys we report below, the Pew question is extraordinarily blunt and does not refer specifically to the notion of collective self-defense. 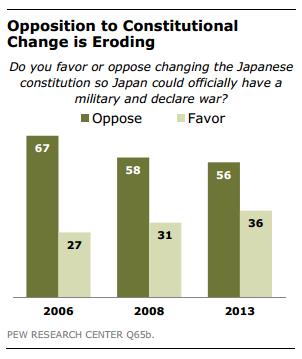 An NHK Public Opinion Poll conducted in April 2014 looked at the broader issue of constitutional revision, which is not limited to the collective defense issues but included a range of other objectives as well (for a useful archive of materials see the Harvard research project on constitutional revision). The findings are somewhat more ambiguous than those in the Pew poll, but still show those opposed to revision or reinterpretation of Article IX outnumbered those in favor:

Posing the question more narrowly around reinterpreting the Constitution to allow collective self-defense shows somewhat different patterns, but with pluralities still in favor of leaving things as they are. 14.1% say that the entire concept of CSD should not be recognized, and another 27.4% say that the current interpretation of the constitution should be left alone (41.5% opposed). Among other things, this group appears to be concerned with Japan getting wrapped up in a future war. On the support side, only 13% say that the constitution should be amended outright to allow Japan to exercise collective self-defense with an additional 21% supporting the reinterpretation route (34% total). These supporters mainly cite that this should be done for the purpose of “Japan’s defense” and to take a more active role in international security.

While Abe’s eventual goal of constitutional revision/reinterpretation was widely known, the previous surveys were culled prior to the administration’s decision to reinterpret Article IX. Along with intense media coverage, a number of Japanese news outlets have recently contributed their own polls on public sentiment regarding the issue. Sankei ran an article that included a useful table on recent surveys: we report a slightly modified English translation of the table below by dividing the press into those leaning left and right. As it turns out, question wording and the political leanings of the respective outlets appear to affect the survey results to some extent; the Japan Times has a great overview on this subject here . 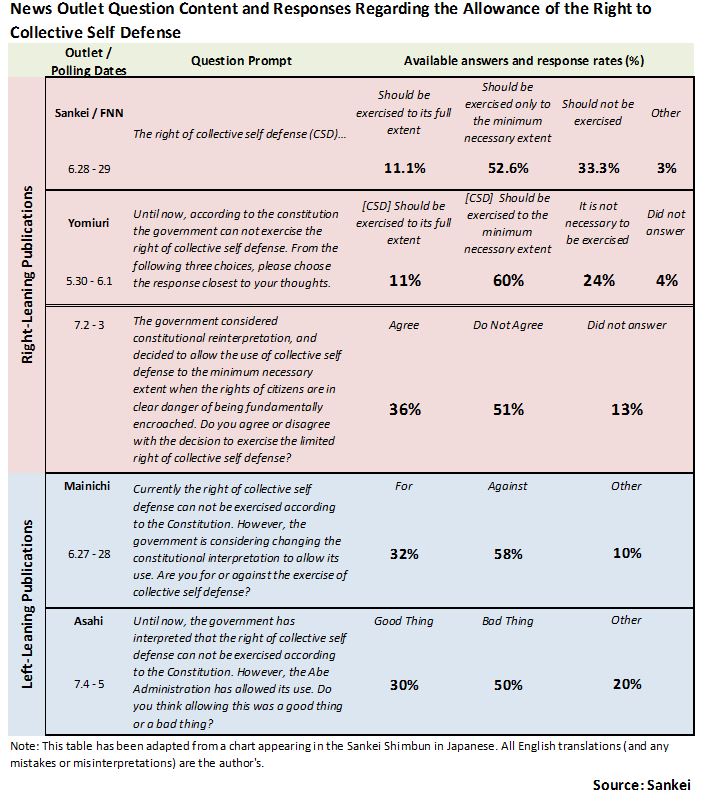 Among the right-leaning publications, the Sankei and first Yomiuri polls allow respondents to choose from three options: whether CSD should be exercised to its full extent, to the minimum extent necessary, or not at all. In both cases, we see that the majority answered CSD should be exercised to the minimum possible extent. However, when Yomiuri conducts a second survey after the government’s announcement to pursue reinterpretation of Article IX, we see that the majority (51%) are against the decision. The left-leaning newspapers essentially get similar results. Both Asahi and Mainichi pose straight-up “for-against” and “good thing-bad thing” questions and get margins of 58-32 and 50-30 opposed and in favor, with undecided making up the remainder.

A final piece of evidence: the Nikkei conducted its own survey (the exact wording in Japanese is here) in late June:

We repeat our closing point from last week: this deal is not yet done. No matter how one slices the various surveys, the public is clearly against moves that would make truly significant changes to the current security architecture, and could turn on the Abe Administration if it ventures too far. The constraints on Abe are visible not only in public opinion but in the required bargaining between the LDP and its New Komeito coalition partner, which extracted its own “reinterpretation of the reinterpretation,” namely that:

These conditions might support some of the grey-zone scenarios analyzed last week, but not necessarily all. For example, attacks on US military assets in the area around Japan, in Guam or even on the American mainland would—under a plain reading of the New Komeito conditions—only permit Japanese support if coupled with a direct threat to Japan.

All of this suggest that steps in the direction of more explicit alliance commitments will continue to take the highly incremental form that they have since the 1997 revision of the defense guidelines. The reinterpretation may be much less than meets the eye and by no means reflects large shifts in Japanese public opinion, which appears more skeptical of the reinterpretation than supportive.

Pacific Forum Issues and Insights in 2014

The Geopolitics of Squid