The Council on Foreign Relations Report

With the North Koreans accelerating their nuclear and missile testing and the election promising a possible change of approach toward North Korea, policy proposals are proliferating; we will be looking at them over the next several weeks. First up, a Council on Foreign Relations report entitled A Sharper Choice for North Korea: Engaging China for a Stable Northeast Asia. Chaired by Mike Mullen, former chairman of the Joint Chiefs of Staff, and former Senator Sam Nunn, the report gathers a highly-credible group with substantial expertise on the North, and on a variety of topics: from human rights (Roberta Cohen), economic issues and sanctions (Nick Eberstadt and Juan Carlos Zarate) to the long and painful nuclear negotiating history (Joe DeTrani, Victor Cha, Gary Samore).

It is easy to criticize strategic patience, and the report pulls few punches. Not only has strategic patience manifestly failed, but “If allowed to continue, current trends will predictably, progressively, and gravely threaten U.S. national security interests and those of its allies.” But the report rests on some pretty standard wishful thinking, and is most interesting when outlining ways the US could escalate the conflict not only with North Korea but with China. As a result, the approach is not without its own risks.

The core of the report appears at first like a variant of Bill Perry’s two-pronged approach of extending an olive branch but threatening to increase costs if North Korea persists. But the report makes clear that it is China rather than North Korea that needs to be engaged. As a result, the report is riven with a well-known contradiction, and only sometimes appears to recognize it. On the one hand, the report states repeatedly that China has a sustained history of enabling North Korea. But at the same time, the report believes that China is amenable to persuasion that it should fundamentally change course and bring greater leverage to bear on Pyongyang.

This persuasion would be exercised by convincing China to open a sustained dialogue on North Korea, including through five-party talks. The new diplomatic push would consist of two core elements. The first is a proposal to “restructure” the Six Party Talks themselves to focus first and foremost on a freeze, albeit with the ultimate objective of complete, irreversible, verifiable dismantlement that has long been the US objective. The second, longer-run diplomatic move involves a set of assurances about US objectives on the peninsula, going so far as to say that US force posture on the peninsula could be an object of negotiation (a position on which several members of the panel issued reservations).

The central problem is that at the current juncture neither China nor North Korea appears particularly interested in these proposals, and will only be less interested in them if the US pursues a strategy of upping the ante. The report claims that there are signs that China is upset with the Kim regime, but it is overly hopeful that such pique has been reflected in real exercise of leverage; I am still not seeing it. Moreover, Beijing has repeatedly stated that the US has primary responsibility for opening up channels of communication with the North; if anything, Xi Jinping has even doubled down on this strategy. And that was prior to the THAAD deployment decision and the current frisson surrounding secondary sanctions, which have made Beijing less rather than more approachable on the issue.

Evidence that North Korea is interested in negotiations has also been slight. Until recently, their proposals have been dominated by the argument that peace regime negotiations would have to come first, a political non-starter in the US. A proposal issued in July (at KCNA Watch) contained mention of denuclearization for the first time in a while, but in the context of ongoing missile tests and ultimately the fifth nuclear test (which CFR documents in a great graphic that we wish we had done, reproduced below). Given the pattern of tests, we find it more than a little implausible that North Korean actions since July can be attributed to the US failure to respond to an awkward initiative. Tellingly, the report makes no mention of the byungjin line, which states clearly that North Korea has little intention of giving up its weapons. 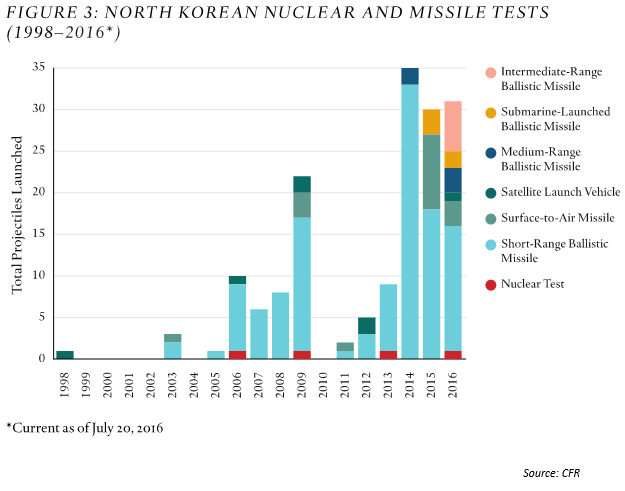 Therefore, the meat of the proposal is ultimately in strategies of escalation, including fuller use of sanctions authorities, which I endorse largely on defensive grounds rather than on belief that they will move North Korea in the absence of a shift in Beijing’s position. The report offers a range of ways that coordination might be increased outside of China’s central role, both by assistance and secondary sanctions on the dwindling number of countries still doing business with North Korea.

But the ultimate stick is in exploiting the thaw in Japan-Korea relations to present a more united military front through a trilateral alliance or collective security agreement vis-à-vis North Korea. This novel initiative—in effect, an alliance targeted explicitly at a single source of threat—would undertake a variety of actions that would be challenging for Beijing; bullets give a sense of the range of actions put on the table:

If I were sitting in Pyongyang, nothing would look more like a justification of the byungjin line than this list of possibilities. But the report is really aimed at Beijing, so the question is how they will respond. If the response to THAAD is any indication, don’t expect cooperation; these actions may look like they are dedicated only to the North Korean threat, but why do the report’s authors believe China will see them that way? To the contrary, this line would justify all those who believe—contrary to all logic—that North Korea is a strategic asset for China rather than the liability it so clearly is.

Vladimir Putin apparently is recorded saying that you should never tell another man what his interests are. The advantage of this approach is that it tells China and North Korea more forcefully what our interests are. China largely has itself to blame for the fact that reports of this sort are getting written. But it will take extraordinary nuance in implementation to send these signals of resolve and at the same time assure the Chinese that they are not the ultimate target. It is absolutely critical that equal weight be given to US willingness to negotiate, even if we believe the prospects for success are low. But what this report does reveal clearly is that we are more and more in a containment world in which deterrence and defense concerns will dominate.