Commission of Inquiry on Human Rights in the DPRK Wikipedia page

We’d like to draw your attention to an important announcement (reproduced below) a few days ago by our colleagues at the Committee for Human Rights in North Korea: there is now a Report of the Commission of Inquiry on Human Rights in the DPRK Wikipedia page.

It was also featured yesterday on the Wikipedia main page under the “Did you know…” section: 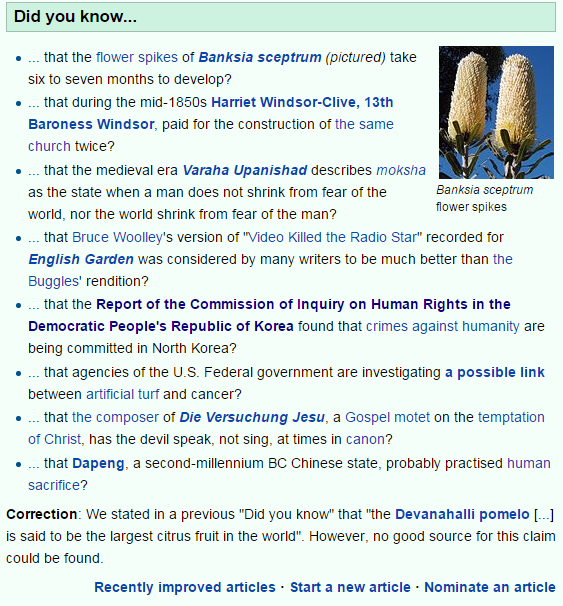 Witness to Transformation Posts on the Commission of Inquiry

WASHINGTON, February 29, 2016-To observe the second anniversary of the United Nations Commission of Inquiry (UN COI) report and highlight subsequent action to address North Korea’s human rights violations, the Committee for Human Rights in North Korea (HRNK) has created a Wikipedia article on the Report of the Commission of Inquiry on Human Rights in the Democratic People’s Republic of Korea.

The Commission of Inquiry report unequivocally concluded that “[s]ystematic, widespread and gross human rights violations have been, and are being, committed by the Democratic People’s Republic of Korea, its institutions and officials. In many instances, the violations of human rights…constitute crimes against humanity.”

It’s timely for Wikipedia to help disseminate the COI report. The 400- page document details the crimes against humanity perpetrated by the Kim dynasty against the North Korean people. Already it has led to calls for accountability from more than 100 states in the UN General Assembly, debates in the Security Council over referring the case to the International Criminal Court, and political and economic sanctions by a host of governments. As more and more North Koreans gain access to the internet, they too will begin to see the COI report as the foundation for trials against their leaders and the bringing of justice to their society.

David Maxwell, HRNK Board Member and Associate Director of the Center for Security Studies at Georgetown University, notes:

This is an authoritative entry on Wikipedia and provides valuable information about the UN COI and North Korean human rights and crimes against humanity being perpetrated against the Korean people living in the north by the mafia-like crime family cult known as the Kim Family regime. And if Kim Jong-un surfs the net I would recommend that he bookmark this site so he will know why he will be held accountable when the Korean reckoning comes.

Living under the world’s most oppressive regime, the people of North Korea suffer from unimaginable human rights violations. Efforts to send information into North Korea via radio or portable media storage devices should include the Wikipedia article on the UN COI report, so that the victims may know they are not forgotten, and their tormentors may understand that there will be consequences for crimes against humanity and other human rights violations.

The creation of this article on the Commission’s landmark report is part of a larger HRNK Wikipedia series on human rights in North Korea and was completed with the intent to be a comprehensive, neutral, relevant, and thoroughly referenced account of the circumstances that led to the creation of the Commission of Inquiry, a summary of the Commission’s report, and the reactions to it. HRNK supports Wikipedia’s endeavors to serve as a free and accessible online encyclopedia and hopes that this new addition to Wikipedia will function as a platform to inform, educate, and inspire additional discussion on North Korea’s human rights. In accordance with the spirit of Wikipedia, HRNK invites the North Korea human rights community and all other interested parties to submit additions, revisions, and corrections to increase the accuracy of this article. The article will also be translated into Korean and is available in English here.

HRNK was founded in 2001 as a nonprofit research organization dedicated to documenting human rights conditions in the Democratic People’s Republic of Korea (DPRK), as North Korea is formally known. Visit www.hrnk.org to find out more.