The Chinese and North Korean Politburos

We compare them on a single, simple dimension: in what capacity had these high-ranking officials served prior to their ascent into the Politburo or Politburo Standing Committee/Presidium? We draw a distinction between four roles: military and security; central party positions; central state positions; and provincial officials. Our reasoning is that the composition of these bodies is consequential and speaks to the interests and perspectives represented.

The bodies are by no means perfectly comparable. The Chinese Politburo and Politburo Standing Committee are functioning institutions, while North Korea is a leaderist system in which the role of the Politburo, Presidium, and even the National Defense Commission are far from clear. Nonetheless, there is evidence of an attempt to revive party institutions in North Korea, and the comparison yields some expected but significant differences. Stated most simply: more military and security personnel in North Korea; more provincial officials in China.

Second, in both countries incumbents of the Politburo hold concurrent appointments to other high-ranking positions and these typically change upon entry. In China, for example, two critical party posts have already been awarded to members of the Politburo Standing Committee: Xi Jinping received the party’s top military post as head of the Central Military Commission and Wang Qishan will oversee internal party discipline as head of the Central Discipline Inspection Commission. The remaining party portfolio assignments will unfold over the coming months as Chinese leaders appoint new heads to the different party-leading small groups and commissions. Appointments to top government positions will take place at the National People’s Congress meeting in March 2013. At that meeting Xi Jinping will officially replace Hu Jintao as president (which is Hu’s top government position), and Li Keqiang will replace Wen Jiabao as premier. We indicate these new appointments, but we are equally if not more interested in these politicians’ background: where they came from.

Finally, the top leaders (Hu Jintao/ Xi Jinping in China, Kim Jong Il / Kim Jong Un in North Korea) are difficult, if not impossible, to give a single classification, particularly in North Korea. They have thus been left out of the counts. 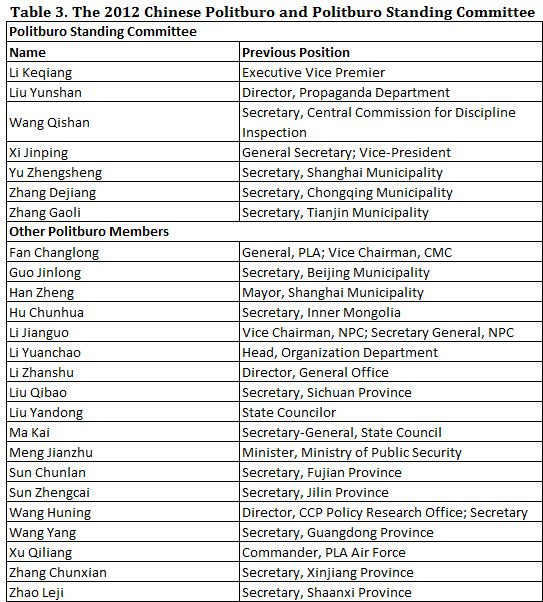 North Korea shows a very different pattern. To our surprise, fully 9 appointees to the 2010 Politburo were appointed from provincial positions. In contrast to China, this number was radically reduced with their assumption of new central government positions upon entry; only one remained in a provincial post following ascent onto the Politburo and that “provincial” position was managing Pyongyang. Nonetheless, it was a good sign that new blood was coming in from the provinces, carrying with it information on conditions outside of Pyongyang.

Yet if we look at the 2012 Politburo, it disappoints on this score with only two officials on the body occupying provincial positions and only four other members even having previous experience as provincial secretaries. Moreover, in both the 2010 and 2012 Politburos the military and security apparatus is much more strongly represented than in China.

The Politburo Standing Committee and Presidium

As noted, both countries also have a standing committee of the Politburo (PBSC in China; also known as the Presidium in North Korea). The function of the PBSC in China is much clearer than in North Korea: it is the executive body that holds primary decision-making responsibility, and actually meets about once a week.

We are much less certain of what the exact role of the Politburo Presidium in North Korea is or when—or even if—it meets. Even the official Workers’ Party rules do not differentiate the powers of the Presidium and regular Politburo, stating that the Presidium and the Politburo organize and guide all party matters in the name of the Central Committee between Central Committee plenums. North Korean media has also never reported on a separate meeting of the Politburo Presidium, and only very sporadically reported on a meeting of the regular Politburo (just three times in the past two years, although this is new and is one sign that an effort might be afoot to revive the party).

Tables 9 and 10 show the breakdown of positions held prior to appointment for the Chinese Politburo Standing Committee and North Korean Presidium. Again, the top Chinese institution shows greater diversity of positions both before and after entry into the PBSC.

The composition of the North Korean Presidium is harder to interpret because it seems to be made up of individuals holding ex officio roles.  The past two Presidiums have been composed of the Supreme Leader/General Secretary (Kim Jong Il and Kim Jong Un), the President of the SPA (Kim Yong Nam), the Premier of the Cabinet (Choe Yong Rim), the Chief of the KPA General Staff (Ri Yong Ho), and the Director of the KPA General Political Bureau (Jo Myong Rok and Choe Ryong Hae). Further confirming this pattern is the fact that when Hyon Yong Chol replaced Ri Yong Ho as Chief of the KPA General Staff in July, he also took over his position in the Presidium. But since we aren’t even sure if the Presidium holds any formal power, the actual effect of this makeup is unclear.

Our friends, UCSD’s Susan Shirk and Melanie Hart at the Center for American Progress, point out that we cannot read what the Chinese leadership will do from these sort of background factors alone. The general tone of commentary on the new Chinese PBSC has been cautious to negative. However, a handful of commenters—notably Bill Overholt —have been more bullish, saying that the old guard has in fact been more marginalized than we think and the pairing of the PBSC from 9 to 7 is good news.

We are having a harder time finding good news in North Korea’s institutional tea leaves. It has been a long-standing theme in the study of China that the provinces have played a crucial role in driving the reform process. China is much more decentralized than North Korea; some have even argued—misleadingly in our view—that it is effectively federal in structure. North Korea’s top institutions are both more dominated by the military and security apparatus, as is well known, but at the expense of officials from the provinces who are closer to the ground. It is disappointing to see the extent to which the new leadership will rely on officials from the center. If we had to wager, we see these institutional arrangements as leaning against the prospects for reform and in favor of more songun.

Thanks to Jaesung Ryu for translation assistance and Victor Shih for comments.

Who needs Christmas? This is fantastic! Great work also over at CSIS. http://csis.org/files/publication/121113_Glaser_ReOrderingChinese_web_0.pdf

Arms and influence? Chinese arms transfers to Africa in context