The British Role in the Founding of the AIIB

On January 16, 2016, China launched the Asian Infrastructure Investment Bank (AIIB) at a lavish ceremony in Beijing. From the very beginning, prospects of securing appropriation to join the Bank in the US were slim. The Obama administration challenged the wisdom of the AIIB saying it duplicated the existing international financial institutions and was vulnerable to weak governance. The real message: the United States was not pleased with the emergence of a major multilateral institution so clearly under Chinese influence.

Yet despite opposition from Washington, Beijing managed to pull together a coalition that included not only prospective borrowers but creditors as well. How did they do it? A review of the pattern of applications for founding membership—contained in the figure below—suggests a highly discontinuous process, with Great Britain playing a tipping point role. Before the British application for founding membership on March 12, China had received only one application from an Organization for Economic Cooperation and Development (OECD) member state, and that was New Zealand on January 8. No other OECD member followed. 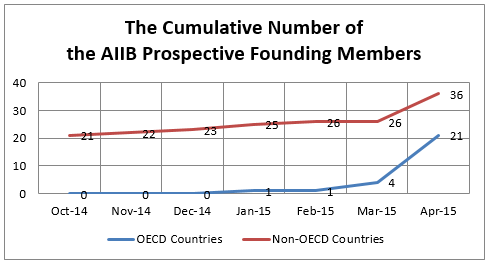 The US was well aware of the effect that Britain’s request to join would have. On March 13, a senior U.S. administration complained to the Financial Times that the British had “virtually no consultation with the U.S.” before the decision to join China’s new development bank. Moreover, London’s “trend toward constant accommodation of China’’ was decidedly “not the best way to engage a rising power.” Britain’s move—possibly motivated by the business the AIIB could generate for the City—let the horse out of the barn. When other G7 members—Germany, France and Italy—put in applications five days later, there was little the US could do and it simply went silent on the issue.

Britain’s request to join seemed to have a far-reaching effect beyond the OECD as well.  After witnessing the emerging international trend sparked by Britain’s move, there is also an inflection in emerging market requests to accede: Brazil, South Africa, Malta, Russia, Georgia, Kyrgyzstan, Azerbaijan, Egypt, Iran and United Arab Emirates all followed suit as well.

What type of influence are the advanced industrial state members likely to wield in the AIIB? Given the constitution of the organization, it is likely to be informal at best and even that influence will be diluted by the apparent absence of resident executive directors that provide channels to important capitals. According to the South China Morning Post, outside presence is most likely to come through five vice-presidencies. Britain and Germany are slated to get two of these, with South Korea, Indonesia and India receiving such positions as well. The German position will be for chief operating officer. The Financial Times reported that Beijing was displeased that Britain had nominated former Liberal Democrat minister Danny Alexander for vice-president in charge of communications despite his lack of experience on the issues.

As in the other international financial institutions, however, formal votes in the AIIB are weighted by capital share in the bank; the chart below shows current capital subscriptions, which moved a bit after the bank’s founding; India’s share went up and it is now the second largest shareholder and Russia’s dropped a bit. As the largest shareholder, China alone has 26.06 % of the total votes. China is also likely to influence the votes of a group of 20 countries that quickly committed to join the AIIB at the first preparatory meeting in Beijing in October 2014 that accounts for 15% of shares. Among them are a long list of likely borrowers: Bangladesh, Cambodia, Kazakhstan, Laos, Malaysia, Mongolia, Myanmar, Pakistan, the Philippines, Sri Lanka, Thailand, Uzbekistan, Vietnam, and Indonesia. Together, with Russia and India, China has a coalition that accounts for well over 50% of the AIIB’s shares.

But this does not take into account the supermajority provisions that are also common features of international financial institutions. Article 28 of the founding agreement stipulates that any super majority vote requires not only two-thirds of all members, but two-thirds representing not less than three-fourths of the AIIB’s total votes. At 26.06% of shares, China thus has unilateral veto power on any issues requiring such super majority vote. These issues are not limited to institutional changes in the bank’s current governance structure, such as increasing or decreasing the bank’s total capital stock or termination of the bank. China also has a final say on the election of the Board of Directors and the President. 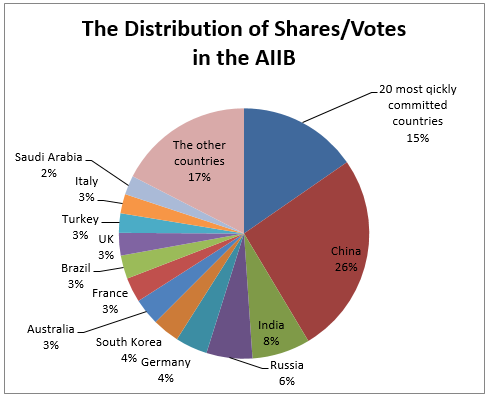