Nicholas Consonery is an Asia Analyst at Eurasia Group.

Investors purchase credit default swaps (CDS) as a kind of insurance against loans or bonds. If the bond goes into default, then the seller of the CDS is obligated to reimburse the investor who purchased it.

CDS products aren’t just used for high-yielding risky bonds that have a good chance of failing--they are also used to help investors hedge against the risk of default by governments.

For China, the CDS market is used by investors in Chinese government bonds to hedge against the risk of a collapse in China’s economy that could force Beijing to default. Holders of Chinese corporate bonds also invest in China CDSs to hedge against the same risks. The CDS market for sovereigns also sees speculative activity by investors who want to make gains, like any other security.

A recent spike in the CDS spreads for China sovereign debt has garnered a lot of media attention. Lisa Pollack at the FT Alphaville blog wrote a piece in late September that noted the rising involvement in the China CDS market, and the fact that the spreads (basically the amount of money that an investor has to pay to insure against a default) are rising notably.  But she also cautioned that readers should avoid making too many conclusions about market sentiment on China just based on the CDS spreads.

But a 2007 report from two staff economists at the US Federal Reserve Board found that there is a mostly “stable long-term equilibrium relationship” for emerging market government debt between CDS premiums and the spread between these governments’ bond yields and the risk-free rate. In other words, despite its perils, pricing in the CDS market seems to reflect actual bond yields and, in many cases, CDS premiums can be an accurate indicator of movements in those yields for emerging market governments.

All this to say, that while the CDS market is not the best or only metric for assessing the market’s take on China, it is at least a factor worth considering.

And what is that market telling us about China and Asia these days?

That the risks are on the rise. 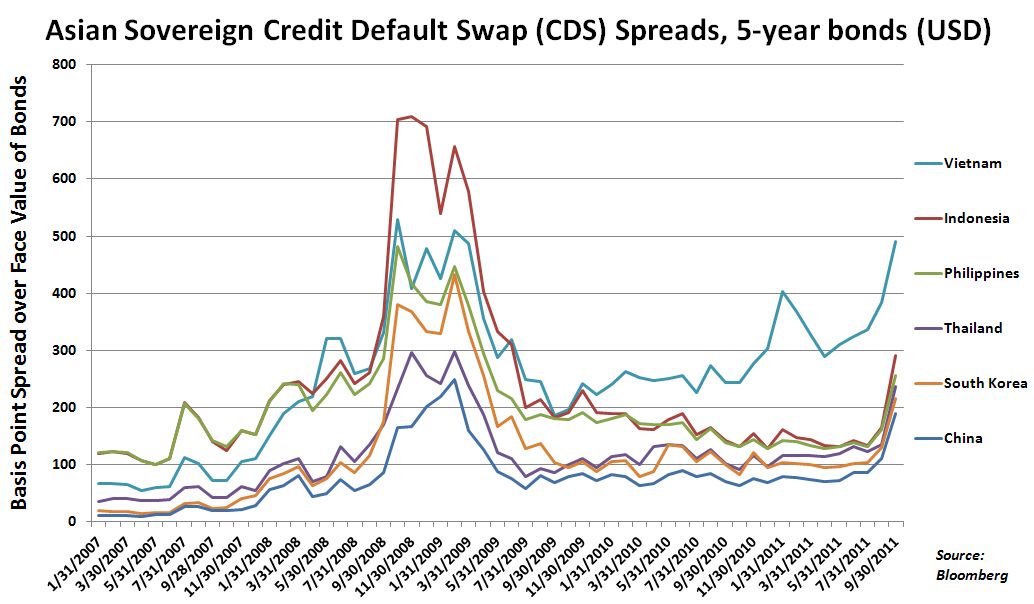 Here are the CDS spreads on Asian government debt since 2007. The post-Lehman bankruptcy spike in late 2008 grabs the attention. At that time investors were fearful of the very sustainability of the emerging market growth story given the economic turmoil in the developed world. In the aftermath of Lehman, the CDS markets for Asia calmed—though they have yet to return to pre-crisis levels.

But since September of this year, there has been a clear spike in CDS spreads for China.

There are three big factors at play. The first is probably the most important in the near-term. This isn’t just a China story; it’s an emerging markets story. The graphic above lists China alongside some of its Asian neighbors to make this point. Over the past month CDS rates spiked across emerging markets, as the Europe debt story roiled financial markets and the US Fed rolled out a pessimistic outlook for the US economy. In other words, in the face of fears of a second double dip, we’re seeing the same kind of flight-to-safety and risk aversion that we saw in 2008. And growth concerns in the developed world are still bleeding into emerging markets, including China. So much for rebalancing?

So the second factor boils down to this question: How committed is the Chinese government to maintaining its current economic policies? I think the leadership is already laying the groundwork for some changes. But uncertainty surrounding the answer to this question is also weighing on investor thinking about China’s trajectory.

Since this summer, markets have been anxiously awaiting a “turning point” in Chinese economic policy, when easing inflation allowed the leadership to back off its tightened monetary policies (reserve requirement ratios are at 21.5% for big banks). But over the past month both the Chinese central bank and Premier Wen Jiabao reaffirmed that inflation-fighting was still the number one policy priority for the government. As a result, market participants are now realizing that an economic policy turn in China, if it happens, is going to be less of a “U-turn” and more of a slight course correction. That’s raising fears that China’s coming economic slowdown could be harder than investors once expected.

The final factor is that these growth-slowdown concerns are connected to related fears about non-performing loans, other bad banking practices, and perhaps even a real estate bust in China. These are all topics for other posts. But it is obvious that there are very real market concerns about the sustainability of China’s economy. And a more-severe-than-expected slowdown might mean that any one of those issues becomes a problem more quickly, and more severely, than most investors are anticipating.

A last point on the CDS market--notice that the spreads for China’s neighbors (except Vietnam since 2010) are basically moving in tandem with China in this market. As China goes, so goes Asia. Given China’s growing economic might, and the extent to which Asian countries are moving to benefit from Chinese demand, I would be surprised to see this linkage break down anytime soon.

So for now, all eyes are on the Chinese leadership to reverse course on their economic policies. It looks like the costs of insuring against sovereign defaults in Asia may keep rising until they do.

Banking Nationalism and the European Crisis

The Political Redefinition of Europe