President Trump’s top economic advisors believe China’s growth is slowing and are advising him to hang tough in the emerging trade war in the belief that China will give in to US demands to avoid a further slowdown. Presumably that means imposing tariffs on an additional $200 billion in imports from China a few weeks from now. The slowdown narrative is based on slowing investment and disappointing recent retail sales. But the investment argument is based on faulty data.

What about retail sales? Is consumption really weakening as a consequence of a slump in the Shanghai stock market, a weakening currency, and a trade war that has left Chinese consumers pessimistic as the New York Times argues? Anecdotes can be interesting, but there is no sound empirical evidence that consumption in China is weakening. Alibaba, the world’s largest ecommerce company, just reported a 60 percent rise in sales in the most recent quarter compared to a year ago—a sign that Chinese retail sales data likely do not fully capture China’s burgeoning digital retail. In any case, retail sales are an increasingly less useful measure of consumption, as China’s large and still growing middle class is spending a growing share of their rising income on education, health care, travel, and other services that are not captured in official data on retail sales.

Retail sales data is released monthly, and those who want to keep their finger on the pulse of the world’s second largest economy continue to track the data. But the best data on consumption are released quarterly. In the second quarter consumption expenditures accelerated, pushing up consumption growth for the first half of the year to more than 7 percent year-over-year.

We might have a better chance of avoiding a further escalation of the emerging bilateral trade war if President Trump was receiving sound advice. 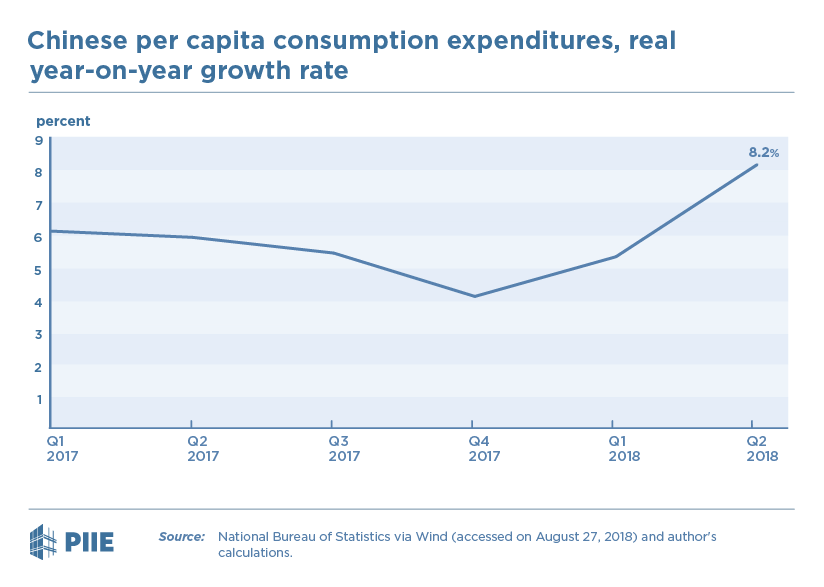