In the run up to the Third Plenum many analysts suggested that the Party’s economic reform program would necessarily focus on state-owned enterprises. The logic was seemingly impeccable. A growing body of evidence shows that state-owned companies are an increasing drag on China’s economic growth. Under the leadership of Premier Zhu Rongji, the reform of these firms in the second half of the 1990s led to dramatic improvements in their economic efficiency. The improvement was so great that the large gap in return on assets between state firms and private firms was almost closed by the middle of the last decade. But since 2007 this gap has increased as returns in private firms continued to rise while state-owned firms have turned in shrinking returns in most years. The result is that by 2012 the return on assets in the private sector was more than two and a half times that of state firms. State firms’ returns were only 5 percent, well below the cost of capital. 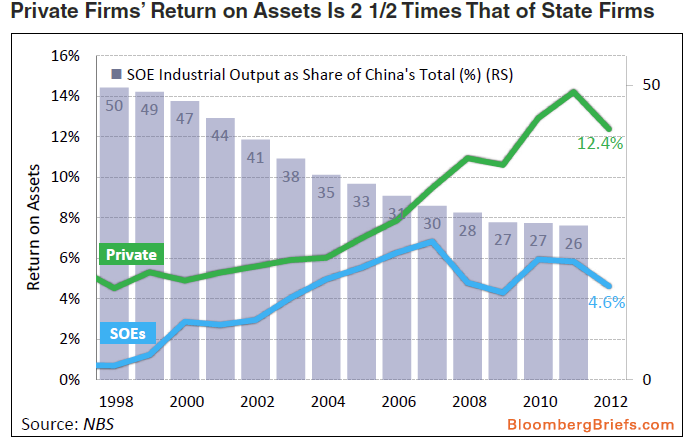 At first blush the plenum communique appears to offer substantial support for state-owned firms. They are given a billing of a main, leading role in China’s economic growth. Moreover, the document fails to even directly mention the private sector, instead using the euphemism of “the non-public economy.”

Managers of state-owned firms are unlikely to take much solace from the Plenum Document. In industry private companies for more than three decades have relentlessly gained market share at the expense of state firms, which now account for only about a quarter of output. Even this position is possible only because government regulatory barriers allow state firms to maintain a near monopoly in utilities and a relatively strong position in mining. In manufacturing, which accounts for about three-quarters of industrial output, state firms now account for less than a fifth of output. Even more surprisingly, these firms now undertake only 13 percent of all investment in manufacturing. The vast majority of investment in manufacturing is undertaken by domestic and foreign private firms, suggesting that their share of output will continue to rise and that of state firms will shrink further.

Moreover, the Plenum document gives unqualified support to letting the market play a decisive role in resource allocation and hints that the regulatory barriers that have protected state firms in some subsectors will be dismantled. Most state firms have already demonstrated that they are unable to compete on a level playing field with private companies. Rather they have relied on preferential treatment through a variety of government policies. But the plenum hints that the government is going to rely more on market signals to guide its own activities. Expanding the role of the market will reduce the preferences the state has bestowed on its own firms and further erode their position.

The emphasis in the plenum document on establishing a unified, open, and competitive market is a further signal that private firms will be allowed to enter some of the domains in the service sector that up to now have been reserved exclusively for state firms.