Rewriting History: A SAFE Revision Reveals a Different Picture of Balance of Payments and a Mixed Message for Foreign Firms

Revisions to economic statistics are common and often do not have a dramatic impact on the overarching trends, other times they are significant enough for analysts to change their perspective on what is happening in a country. The most recent revision to balance of payment data released by China’s State Administration of Foreign Exchange (SAFE) yesterday is one of the latter.

Until yesterday if you had looked at China’s balance of payment figures for 2011 and 2012 you would see a decline in current account as a share of GDP, the current account share of GDP fell to 2.6 percent in 2012, down from 2.8 percent in 2011. You would also have thought that the earnings of foreign companies in China increased in 2012. For those that read the preliminary figures and thought China’s current account surplus had continued to decline in 2012 and foreign earnings continued to improve in 2012, they would be wrong on both counts.

A statistical revision published by SAFE revised the current account surplus as a share of GDP for 2011 and 2012 down to 1.9 percent and 2.3 percent respectively. Such statistical revisions are common, particularly in the balance of payment data, but there is rarely as significant a change as in 2011.

At a glance, there are three key takeaways from this revision: First, the balance of payments now shows that the current account surplus share of GDP rose by 21 percent in 2012, a shift from the previous trend of continued decline since reaching a peak of 10.1 percent of GDP in 2007.  Second, the 52 percent decline in current account surplus in 2011 was even more severe than that of 2009. 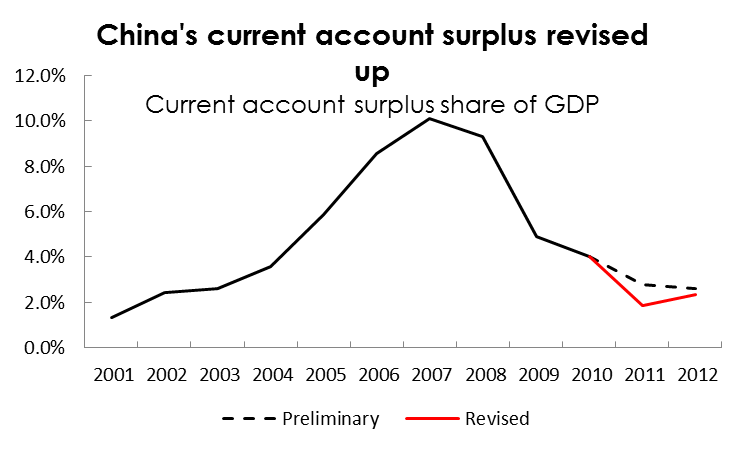 What is the cause of this revision? The service sector is often the culprit as data is typically more difficult to gather in time for preliminary data released two months after the end of the quarter.  The recent revision of 2012 was due to such a phenomenon. SAFE adjusted China’s service sector trade deficit up by 78 percent.  Yet in regards to the more significant 2011 revision, the adjustment to services was mostly moderate.

Instead foreign income was the blame for 2011. The recent SAFE revision shows that foreign enterprises in China earned 37.5 percent more in 2011 than was indicated prior to the revision. After the adjustment the earnings of foreign companies in China show a decline—now putting SAFE in line with data published by the National Bureau of Statistics earlier in the year showing a decline in the profits of foreign industrial firms in 2012. 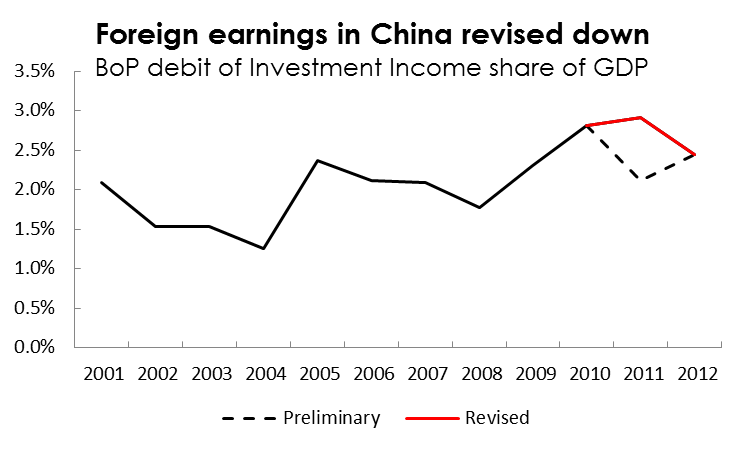 It is easy to jump on SAFE for a statistical revision to China’s current account data, and hawks are almost certain to view the revision as an effort to manipulate data to hide a renewed growth in China’s current account surplus.  They are wrong. The most recent revision mostly reflects the difficulty in collecting data on the service sector and retained earnings for foreign firms in China, not an effort to manipulate data. Now foreign firms in China may need to adjust their strategies after a slowdown in 2012, provided the next SAFE revision does not significantly raise foreign earnings for 2012.