Summer heat is spreading, but the labor market in China remains cold. 6.99 mn college graduates, a historical high, are set to leave school and enter the labor markets soon. However, only 35% of graduates had managed to secure a job by April, compared to 47% by April in 2012. This tough figure implies that two thirds of graduates might be facing unemployment. According to the “2013 College Graduating Students Job Hunting Report” by Zhaopin.com, companies in Shanghai received on average 101 resumes for each job opening, compared to 69 in last year. The figure is 96 in Beijing, 115 in Guangzhou, 109 in Shenzhen and 102 in Suzhou. Adding to this problem, the number of college graduates hit a historical high of 6.99 mn this year. Since colleges in China started their enrollment expansion, total admission grew from 1.6 mn in 1999 to 2.12 mn in 2003, 6.57 mn in 2010, 6.85 mn in 2012, and 7 mn in 2013, representing an annual growth rate of 11.83%, a figure higher than China's GDP growth. The mismatch trend will continue and even intensify for the coming years, likely to leading to rising unemployment in urban China.

The increasing difficulty for college graduates in the job market is caused by multiple factors, including distorted job expectations toward openings at the public sector and SOEs, structural labor mismatch across sectors and regions, and a larger mismatch between the national education system and labor demand.

Twisted job expectations toward openings at the public sector and SOEs

Becoming a  public servant has become the most popular choice for college graduates, as these jobs are stable, well-paid, and powerful. For example, there are 20,839 openings for public servants opening this year, but 1.12 mn applicants took the qualification exam, representing a 1.87% acceptance rate, compared with 6.29% in 2003. The number of students taking the public servant entrance exam has grown by a factor of 10 over the past decade, outpacing the growth of college graduates which tripled during the same period. The proportion of public servant applicants to total graduates rose from 4.1% in 2003 to 14.1% in 2012. 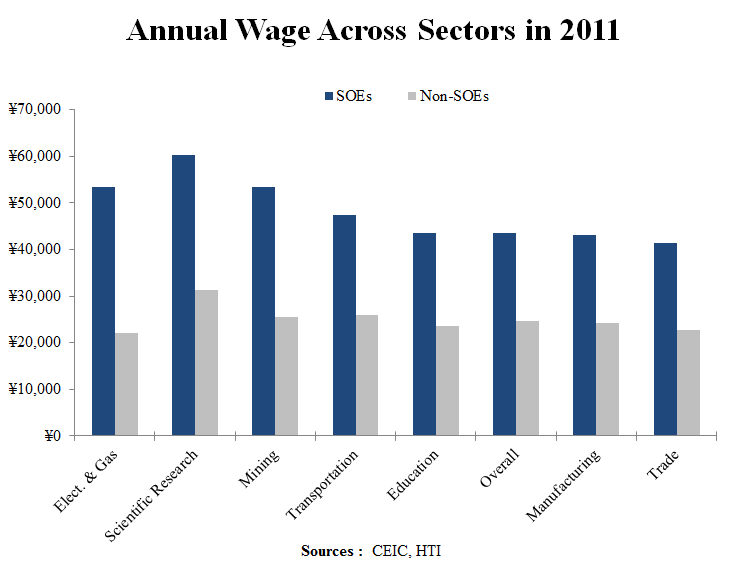 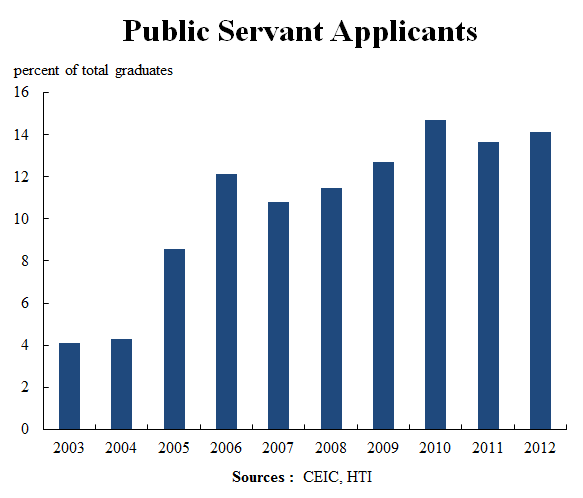 Influence of the government is also enormous in non public sectors. State-Owned Enterprises (SOEs), often with monopolistic positions, offer a semi-public servant choice. Jobs at SOEs often offer good wages and benefits with high job security. The average yearly salary in SOEs amounts RMB 48,357 compared with RMB 28,752 in non-SOEs in 2012. This gap persists across all sectors; the annual wage gap between state and non-state enterprises in Scientific Research is the largest, followed by Mining and Electricity & Gas sectors.

Apart from higher wages, SOEs' employees also enjoy great benefits, so-called "invisible income", including a wide spectrum ofs allowances and subsidies, generous medical packages, better access to high quality education, and subsidized housing. For example, many SOEs' contribution to an employee's housing fund could reach up to 20% of their salary, compared with 5% as the minimum requirement in most non-SOEs. Besides wage and benefits, pension schemes at SOEs are another attraction. Dual pension schemes prevail in China, that is, two different schemes are applied to SOEs and non-state employees. For non-state firms, a retired worker can get monthly pension at 20% of the local average wage in the year before retirement, plus 1/120 of his/her accumulated individual contribution to the pension account conditional on 15 consecutive years of pension contribution. For SOEs, their pension is financed by the Ministry of Finance, the same as for public servanst; therefore a retired worker can get 80%-100% of his pre-retirement salary. According to the "China Health and Retirement Longitudinal Study" by the National School of Development at Peking University, the medium of annual pensions for government or SOE retirees is RMB 24,000 per year compared to RMB 18,000 for the private firm retirees.

Compensation and job security advantages in SOEs have become a magnet to college graduates, as a result, many graduates would rather stay home if they are not able to secure a position at a SOE. In Qingdao in 2012, the applicants for one position at SOEs was as high as 113, compared to only 45 for non SOEs.

The fast growing financial sector offers the highest pay in the market. As of December 2011, the average annual wage of employees in financial institutions was RMB 81,109, compared that of RMB 41,799 for all firms and RMB 36,665 for manufacturing companies.

Therefore various financial institutions including banks, insurance, investment banks and funds as well as highly leveraged real estate developers have become the top choices for college graduates and among the hottest majors in the colleges. To cater the rising demand, colleges and universities have offered more and more financial related majors and courses, exceeding the demand for these skills the market. For example, the total number of graduates majoring in Economics & Finance & Management in 2011 reached 397,000, far beyond the 167,000 graduates majoring in Engineering & Technology. As a global manufacturing powerhouse, China has kept strong appetite for talent in these fields especially given efforts to move up the technology value china  and increase productivity. However, overcrowded financial and financial related sectors have been hollowing out of manufacturing sectors by draining capital, talents and resources, which has intensified concerns over unsustainable economic growth.

Besides sector’s mismatches, regional mismatches are another concern. Most graduates prefer well developed east region, leading to a labor shortage in westerns region have rapid development labor. The demand/supply ratio in the west rose to 1.16, comparing with 1.09 in the east and 1.08 in the center, and the trend is likely to continue in the coming years along with acceleration of urbanization of China. 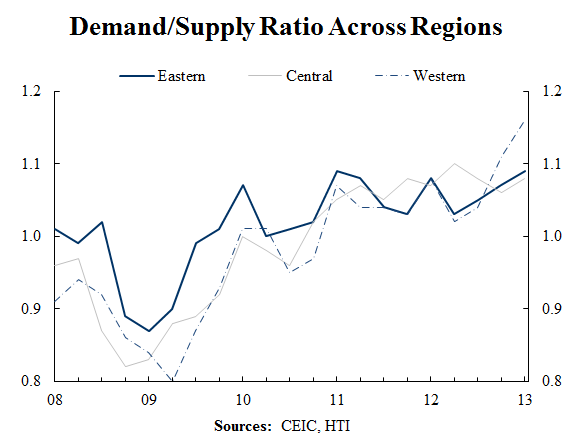 China's education system has developed rapidly with a surge in college graduates especially after the government's college expansion scheme starting in 1999. China's families generally put high expectations on kids and therefore push them to attend higher education. A college degree is treated a necessity for most families as long as they can afford it. As a result, the number of college graduates jumped to 2.12 mn in 2003, after the first round of the college expansion scheme, from 1.6 mn in 1999. College graduates doubled for the next three years hitting 4.13 mn in 2006, and then kept growing, reaching up to 7 mn this year.

German model as a valuable reference

The German industrial model is frequently taken as an example of durable success making the country the locomotive of the Euro zone in terms of exports and growth. The reasons for this success lie with the original structure and dynamism of the so-called Mittelstand, made up by innovative medium and large-sized companies. They represent 50% of total private investment, 72% of private employment and 80% of apprenticeships in Germany.  Apprenticeship and the strong ties between companies and the universities are at the heart of the success as they foster productivity and innovation.

The major factors behind the success of the German model are as follows:

In sum, the German industrial model provides a valuable reference for China in terms of the adequacy of the educational system amid its strong ties with the German economy.