A widening gender gap in labor force participation and earnings has accompanied China’s economic achievements since the beginning of Deng Xiaoping’s economic liberalization. A major factor driving this trend has been the loosening of state control over the marketplace, which has given private sector firms and even state-owned enterprises more latitude in a competitive economic environment to discriminate against women in the workforce and in pay. At the same time, state-supported childcare facilities have declined, putting a burden on women seeking employment and on firms that would have to pay a premium to hire women.

These and other factors have effectively blocked many women from competing on an equal footing with men in China’s labor market. The resulting underutilization of human capital has weakened labor market efficiency and imposed a drag on China’s economic growth.

Gender gap in labor force participation and pay is widening

Prior to the economic reforms of 1978, China had only modest gender gaps in the labor market. During the Maoist era, the command economic system did not allow for much income inequality and treated all men and women largely the same in the workplace. This equal treatment has left China with a legacy of high female labor force participation, which since 1990 has always been among the highest in the world, consistently exceeding that of the United States.

However, the gender gap in labor force participation rates in China has risen from 9.4 percentage points in 1990 to 14.1 percentage points in 2020—while in other major economies including the US the gap has been closing (see figure 1).[1] Many factors have contributed to the widening gender gap in China. With a decline in childcare support from the state, women have had to spend more time at home taking care of their children, which has limited their ability to participate fully in the labor force (Connelly et al. 2018). This has been exacerbated by China’s evolving family structure with fewer married couples now living with their parents, who could have shared some of their care responsibilities (Shen, Zhang and Yan 2012). As a result, Chinese women on average devoted three times as many hours to childcare as men did in 2018. 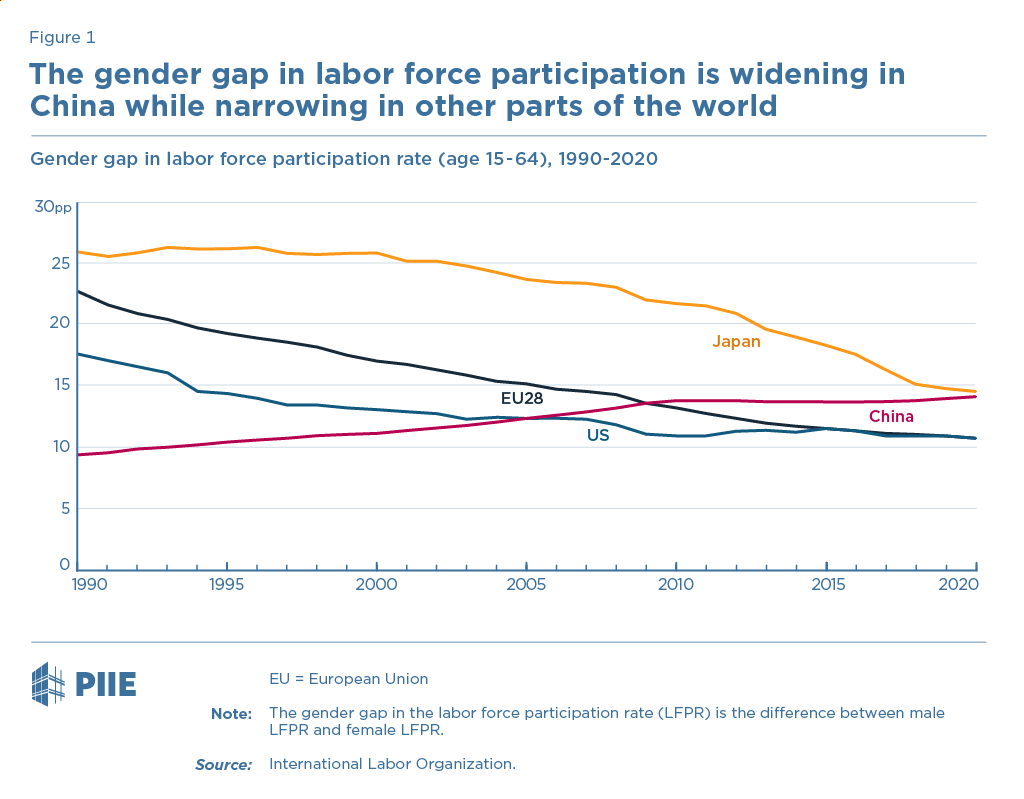 The disproportionately large childcare burden on Chinese women reinforces the discriminatory practices against them at work. In particular, gender-based hiring biases are on the rise. Though Chinese law prohibits gender discrimination in hiring,[2] many employers, in both public and private sectors in China, are now explicitly stating in their job advertisements that they do not want women. According to a study by Human Rights Watch, nearly one-fifth of China’s national civil service job postings in 2018 specified preference for male applicants over female. Another study led by All-China Women’s Federation in 2015 found that more than 80 percent of female university graduates in China have experienced some form of gender discrimination in their job search, regardless of the type of employer.

While Chinese law explicitly prohibits discrimination against pregnant women and mothers with young children,[3] practices usually fall short. Women of childbearing age tend to leave the labor force in the middle of their career, only to find it hard to return to the labor market. Furthermore, Yafeng Wang and Chuanchuan Zhang (2018) find that care responsibilities for grandchildren tend to associate women with  early retirement, but not men.

The gender gap in earnings has also widened in recent decades in spite of greater gender parity in educational attainment in China. Research (Zeng et al. 2014) shows that while gender inequality in schooling in China has narrowed substantially over time, gender disparity in earnings has worsened over the past few decades. Wei Chi, Bo Li, and Qiumei Yu (2011) find that gender pay disparity had widened in urban China from 1987 to 2004. Yao Tang and Rebecca Scott (2017) provide further evidence that a disproportionately large share of women are kept in low-pay occupations, a phenomenon they dubbed as the “sticky floor” effect. Moreover, they also find evidence of a “glass ceiling” effect, with women earning higher incomes facing greater gender discrimination. A more recent survey by China’s online recruiter Boss Zhipin finds that an average Chinese woman made around a fifth less than her male colleagues in 2019. 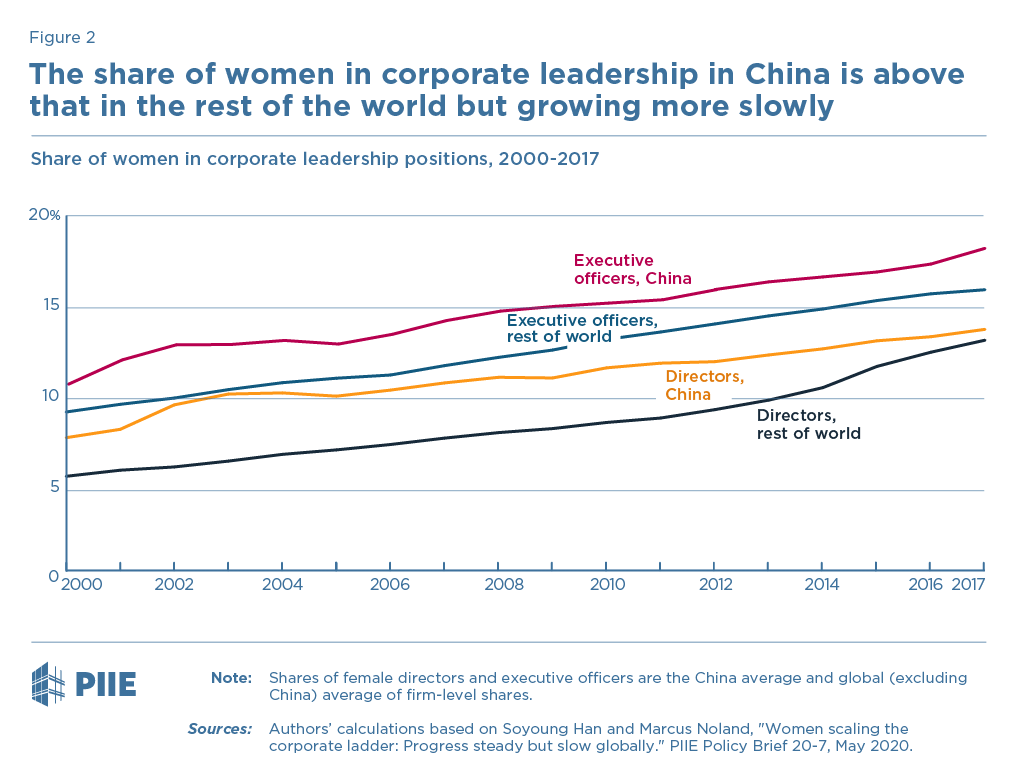 One factor that may inhibit experienced Chinese female professionals from assuming corporate leadership positions is China’s unequal statutory retirement age: 50 for female workers in general and 55 for women holding management positions but 60 for men in both cases. The policy was set in 1951 and never revised, despite life expectancy of Chinese people increasing from 35 in 1949 to 77 in 2019.[5] Many Chinese experts have called on the government to raise the retirement age or to adopt a more flexible retirement arrangement to allow people to work after reaching retirement age, but policy has changed little so far. Raising the retirement age for women will be an important first step in providing equal opportunity for female professionals to assume senior positions.[6] That said, raising the retirement age alone will not ease the burden of women who tend to retire early to care for grandchildren. More measures are needed to free up the time that women spend on care responsibilities so they can continue working. Such measures include subsidized childcare for preschool children and mandatory paternity leave encouraging men to assume greater care responsibilities.[7]

The Chinese economy is slowing, and a shrinking labor force is among the many contributors. Going forward, an aging population and the continuous shrinkage of the labor force will likely become more of a drag on China’s growth. Increasing gender equality, however, can counter this drag. Removing the many gender-based discriminatory practices in the workforce would improve Chinese labor market efficiency, thus boosting growth. It would require greater policy intervention providing targeted support for women and more stringent enforcement of antidiscrimination laws. At the end of the day, leveling the economic playing field at work would benefit not only Chinese women but also the entire economy.[8]

1. The gender gap in the labor force participation rate (LFPR) is the difference between male LFPR and female LFPR, calculated with data from the International Labor Organization (ILO). LFPR is the proportion of the population that is economically active: all people who supply labor for the production of goods and services during a specified period. For cross-country comparison, we use LFPR for the age group 15 to 64.

3. See, for example, Article 27 of the Law on the Protection of Women’s Rights and Interests of China.

4. We employed data on Chinese firms from the Han-Noland dataset (2020) and did not find any significant correlations between women in corporate leadership and firm performance.

8. A 2015 estimate by the McKinsey Global Institute shows that closing the gender gap to different extents could add $2.5 trillion to $4.2 trillion to China’s GDP by 2025 from 2014 levels.