Cleaning up Energy Consumption in China: The Nuclear Question

Cleaning up Energy Consumption in China: The Nuclear Question

China – now in the midst of a war on pollution - is actively seeking to reduce reliance on fossil fuels and slowdown carbon emissions. Last month, China announced two targets to increase the share of non-fossil energy sources from the current 10 percent to 15 percent by 2020 and 20 percent by 2030. One of the key questions in achieving this goal is how much China will need to rely on nuclear power?

A Goal for a Cleaner Future 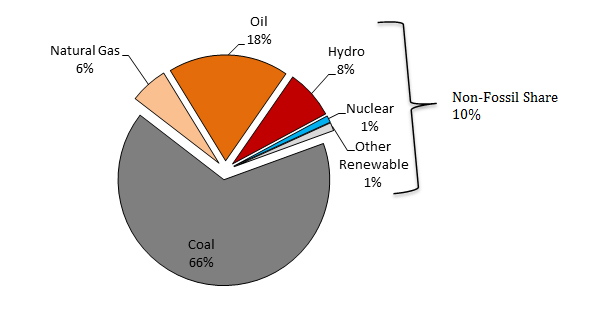 This is set to change over the next few decades. Last month China outlined plans to raise the share of energy coming from non-fossil sources to 15 percent by 2020. It also made a commitment with the United States to raise the share to 20 percent by 2030. These commitments will bring China more in line with the global average for non-fossil consumption by 2020 and developed economies in North America, Europe, and Asia by 2030. 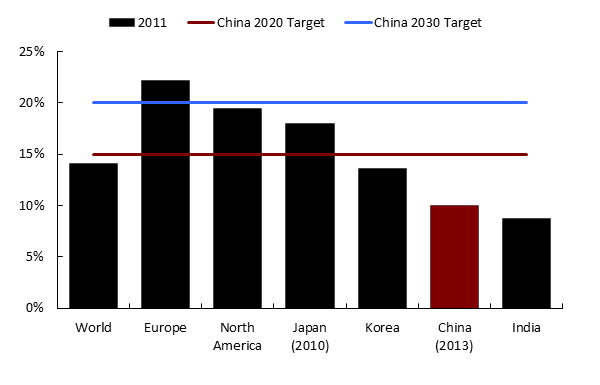 In the past most developed economies have only achieved this goal with the rapid rollout of nuclear power, particularly in Asia. Of the 48 operational reactors in Japan, 12 went online in the 1970’s, 16 in the 1980’s, and 15 more in the 1990’s. The share of Japan’s total primary energy consumption coming from nuclear power expanded from 2 percent in 1977 to 13 percent in 1997. South Korea’s nuclear development is even more striking: going from less than 2 percent of the total energy supply to over 14 percent just within the 1980s. South Korea’s 2025 government forecast implies nearly 17 percent of its power supply will come from nuclear, up from 10 percent today.

Today nuclear power is a petite 1 percent of total energy consumption in China. It has 22 operational reactors, one less than in South Korea whose population is less than 4 percent of China’s, and just one more than India, a country of similar population but which generates significantly less electricity and economic output. 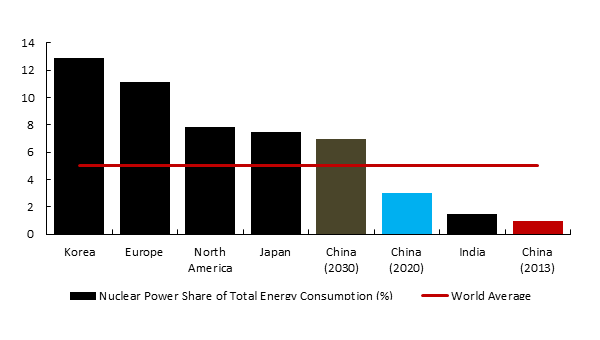 China’s near term goals for nuclear power also appear quite modest. Its current plan calls for more than doubling the number of operational nuclear reactors over the next seven years with 26 reactors under construction. By the end of 2020 China is hoping to have 48 reactors connected to the grid, more than South Korea or Japan.  However, even after doubling the number of reactors, the share of energy consumption coming from nuclear power will rise to only 3 percent, below the global average of 5 percent and well below the 8 percent average in North America. Even the scale of the buildup looks relatively small from a historic perspective. For example, the United States – home to the largest nuclear reactor fleet in the world – built more reactors in a shorter period of time.  China will have connected only around 40 additional reactors to the grid in the decade ending in 2020, just shy of the 46 connected by the United States in the 1980s but less than the 59 reactors put online by the United States in the 1970s.

Demand for nuclear power will depend on China’s ability to leverage renewables. China is the largest producer of hydroelectric power in the world, producing more than double the output of second-place Brazil. Hydropower currently supplies 7 percent of China’s energy, about 10 times the power generated by nuclear. Moving forward, hydropower is expected to remain stable at around 7 percent while wind and solar power becomes a larger portion of the mix. China hopes that wind and solar can supply 5 percent of energy consumption by 2020, bringing the total renewable energy share to 12 percent from 9 percent today. 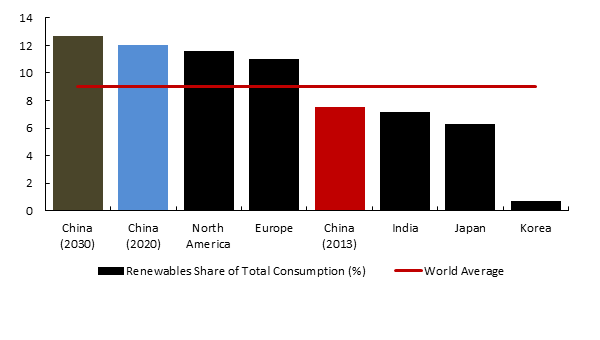 However, beyond 2020 the ability of China to increase its consumption share of renewable energy is less clear. The long run returns on investment in non-hydro renewable generation are still low, making it especially costly for a developing country. In addition, wind and solar power is produced in western provinces far from the majority of energy consumption in the east coast and increasingly central China.  Leveraging these renewables depend on China’s ability to develop advanced smart grid and ultra-high voltage transmission systems. If these technologies struggle to keep up with rising demand for energy, eastern and central provinces may need to turn even more toward proven and reliable nuclear power sources.

China’s exact plans for the 2030 energy mix are still unknown. Yet even with the relatively optimistic assumption that China can reach North American levels of non-hydro renewables consumption by 2030 of around 6 percent of total China would still need nuclear power share of total energy consumption to more than double to 7 percent to reach its 20 percent goal for non-fossil energy consumption. In order to reach this goal China would need at least 100 reactors, bringing the country’s total number of reactors to around 148, larger than the United States. The scale of this build up would be unprecedented.

China’s path towards greater reliance on nuclear energy may come with pitfalls. While certainly not the world’s first nuclear accident, Japan’s 2011 Fukushima disaster has significantly influenced East Asian outlooks on the safety and environmental impact of nuclear power. More recently, South Korea faced its own nuclear safety scare after it was revealed that some suppliers – facing little industry oversight – were faking safety-test certificates on parts while bribing the plants to look the other way. China’s own vulnerability to natural disasters and its struggles to improve regulatory oversight, coupled with the short-time horizon allocated to build and connect dozens of plants, clearly pose safety concerns. In addition, China’s efforts are further complicated by a desire to adopt theoretically safer yet untested third generation nuclear technology rather than rely on existing and well-tested second generation designs. And as millions more Chinese find that a plant has been built in their proverbial backyards, opposition and even outright protest may not be far behind.

Keeping China within the context of its huge size, the current government plans are certainly ambitious, but not without precedent; China is merely expanding its nuclear capabilities decades after other advanced countries made their own push. No matter how China achieves its goal of raising the share of non-fossil energy consumption, whether from greater reliance on nuclear or renewables, the gains for the world are clearly positive. As the largest consumer of energy in the world, it will be much better for China and the planet if less of that energy comes from burning fossil fuels.

An interactive visual tracking China’s electricity generated from nuclear power over the last three decades is shown below. While China has clearly ramped up its nuclear power capabilities, it still has a long way to go to reach the power generated by the United States, France, or pre-Fukushima Japan in both relative and absolute terms.